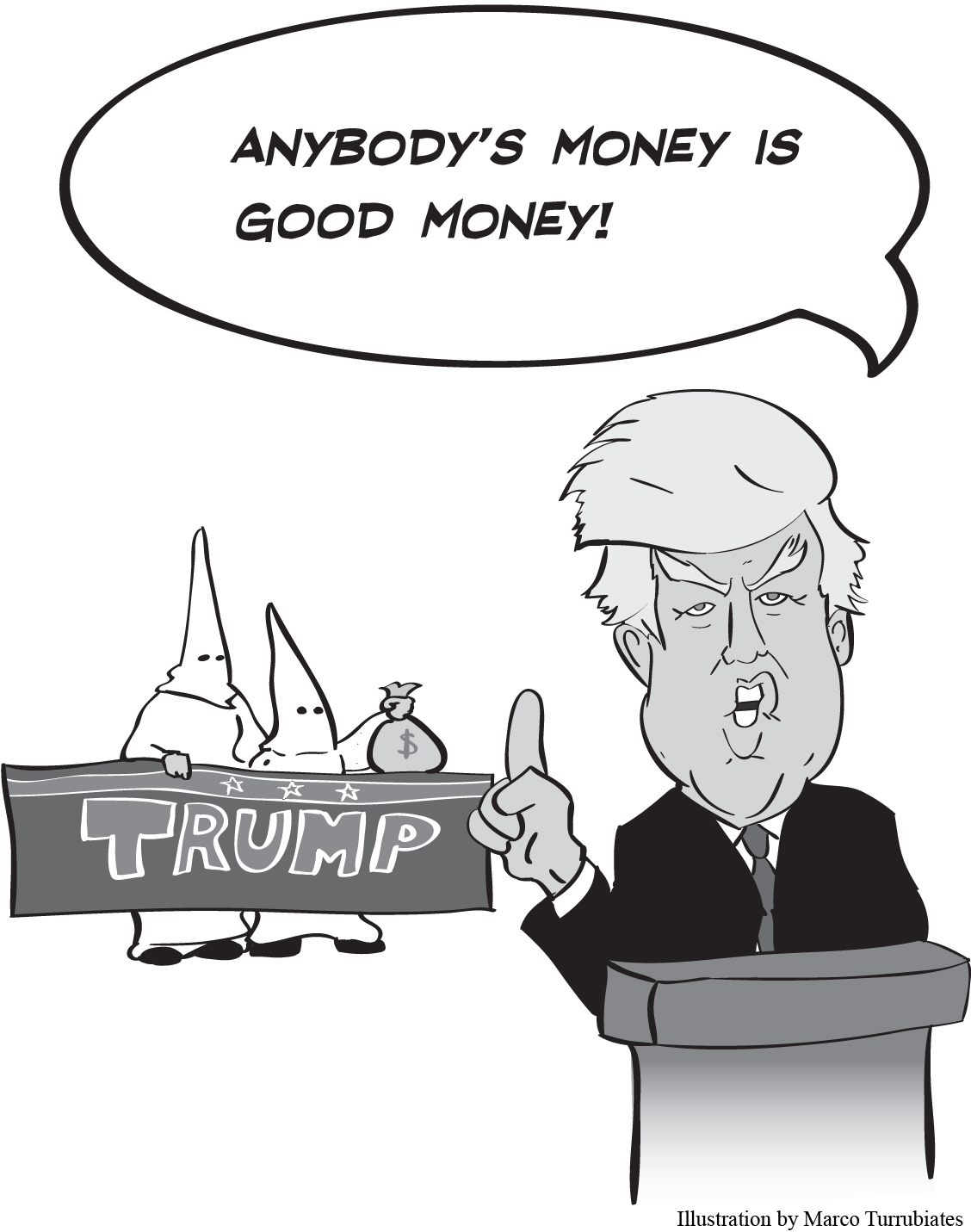 As the frontrunner of the Republican hopefuls, Donald Trump has spewed hateful and inflammatory rhetoric and has seen his support grow. His pledge to “Make America Great Again” implies that America’s greatness has been tarnished by Mexican immigrants, Muslims and/or whatever other ethnic, racial or religious group Trump insults in any given week. Protesters – especially minorities – have been heckled and attacked at Trump’s rallies. Last week, he was resistant to speak out against the support he received from the Ku Klux Klan. If any single element of Trump’s campaign was applied to another candidates, then that candidate would have to step out of the running immediately. Meanwhile, Trump and his supporters only seem to feed off of the controversies. What we need as a country is someone to defeat Trump before he becomes our commander-in-chief and a legitimate threat to the real world.

Trump’s fellow Republican candidates are unlikely to pull ahead, with the possible exception of Texas Senator Ted Cruz. While Trump’s outrageous statements and the general public’s reaction to them have affected most the other candidates stances, shifting to be either more or less extreme than the business moguls. Cruz has remained relatively consistent – consistently far right, but consistent nonetheless. Cruz’s support has also been steady. At the same time, a Cruz presidency would be just as detrimental for the country as a Trump presidency. Cruz presents – and presumably sees – himself as a maverick, shaking up the political game, but the truth is that, in his time as a senator, he has only obstructed progress and angered both sides of the aisle. Maybe the political game is as rigged as Cruz sees it, but his approach to the game has not brought any alternative solutions.

On the other side of the aisle, Bernie Sanders has a better chance than Hillary Clinton to beat Trump. Sanders is as much a politician of the people as Trump sees himself, while Clinton presents the people with what she thinks they want. Additionally, Clinton’s Benghazi hearings are ongoing – while it is unlikely any new evidence will come up against Clinton, Republicans and conservative commentators can use the hearings to discredit her as a viable candidate. Sanders, meanwhile, does not have any similar strikes against him. His policies are good for the country, and he doesn’t resort to hateful rhetoric to garner support.

The 2016 election is no longer about choosing the best candidate for the job – we had more than half a year to do so, and in that year, we let Trump pull ahead of his peers and present a formidable challenge for his foes. Our bad – we messed up, and now we have to pay for our mistakes. This election is about making sure Trump does not become the next President of the United States and leader of the free world. A vote for Trump is not a vote for your own self-interests – it’s a vote for his.