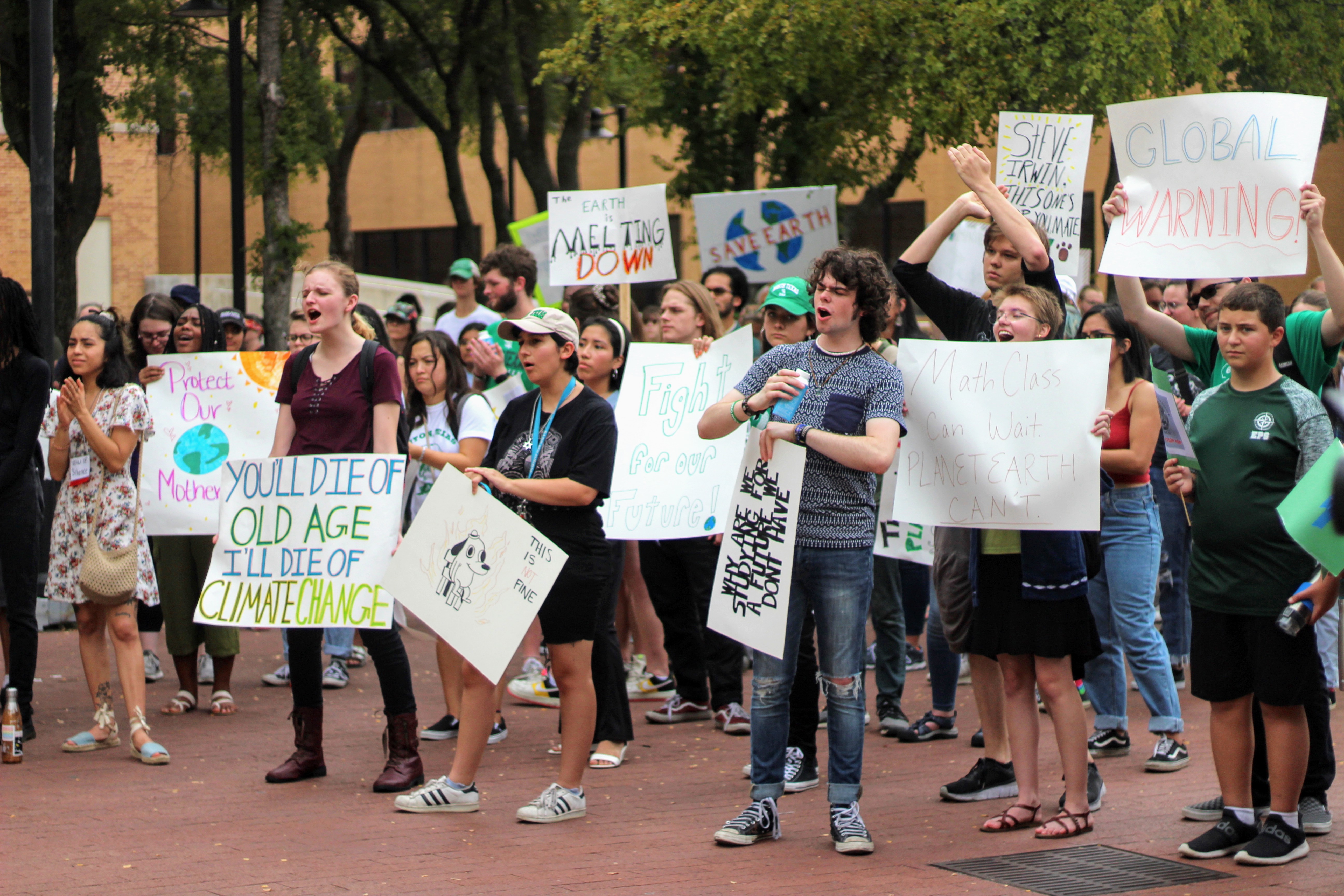 By Garrett Gantt and Alyssa Walker on September 26, 2019

As people around the world gathered to protest for climate change reform last Friday, students and community members came together for Denton’s own climate change strike at the University of North Texas.

The assembly was composed of over 100 people of all different ages, some students from UNT, some students from Texas Woman’s University and some unaffiliated with either university who had heard about the strike on social media and decided to show up in solidarity. The organization of the event was spearheaded by UNT’s Student Government Association and took place at the university’s Library Mall.

Millions across the globe have joined the climate strike, trying to get the attention of world leaders who have the power to make changes in policy that are more focused on conserving Earth’s resources. Attendees and speakers at the Denton climate strike called out not only the representatives at the federal level, but state and local as well.

“I’ve been seeing a whole lot of things in the news about our environment and how things are going downhill,” Steven Nichols, communications design freshman at UNT, said. “I just think we all need to work together and do our part and try to make better of ourselves.”

The climate strike lasted from 11 in the morning to 1 in the afternoon and featured a number of speakers from UNT, as well as one speaker from the Denton city council. Multiple organizations were also in attendance, providing resources and information for attendees.

“I’m overwhelmingly depressed by the United States’ involvement in protecting the climate,” Catherine Lustgarten, retiree and attendee of the Denton Climate Strike, said. “I’m retired, and absolutely determined that retirees and other people who have time on their hands should be in this fight whole hog.”

All the speakers focused around the central issue of climate change, but speech topics branched out from there. Many called for reform of the entire capitalistic system that they say led to the current environmental crisis. There was also a common demand among the speakers to give people in indigenous and impoverished countries a seat at the table in the discussion of climate reform.

“As we strike today, we must remember that we deserve more than survival,” Shane Warren, UNT student and speaker said.  “The working class, poor and marginalized deserve justice.”

Several organizations from UNT, including the SGA, the We Mean Green Fund and the College Democrats had tables set up behind the speaker platform. Attendees could talk to representatives from each organization for more information about what they could do to get involved. The SGA also set up a table where attendees could register to vote.

“Students can make their green voice heard by proposing an environmental campus project that they’d like to see happen here,” Emily Bilcik, the We Mean Green Fund Project Coordinator, said.

Other speakers included UNT undergraduate student body president Yolian Ogbu, Uel Trejo, Brooke House and Denton City Councilwoman Deb Armintor. After the end of the speeches, Ogbu returned to the stage to lead the crowd in a series of chants calling for policy changes.

“We are doing this in solidarity with millions of other people around the world right now, this very second, striking for our lives and making sure that we hold our leaders accountable,” Ogbu said.

After the chants, the strike came to an end, and attendees could mingle or seek more information from any of the organizations in attendance.

“To create a just world, we must demand the end of fossil fuel use in our economy, but we must also go further,” said Warren. “We must demand an end to the economic system which allowed a few rich executives to drive us to the brink of Armageddon.”

For more information about the Denton Climate Strike, visit their official Facebook page.

Featured image: Students and protesters cheer in agreement with a speaker during the Denton Climate Strike at The University of North Texas in Denton, Texas Friday, September 20, 2019. Photo by Sarah Pham.

Published in Community and In print