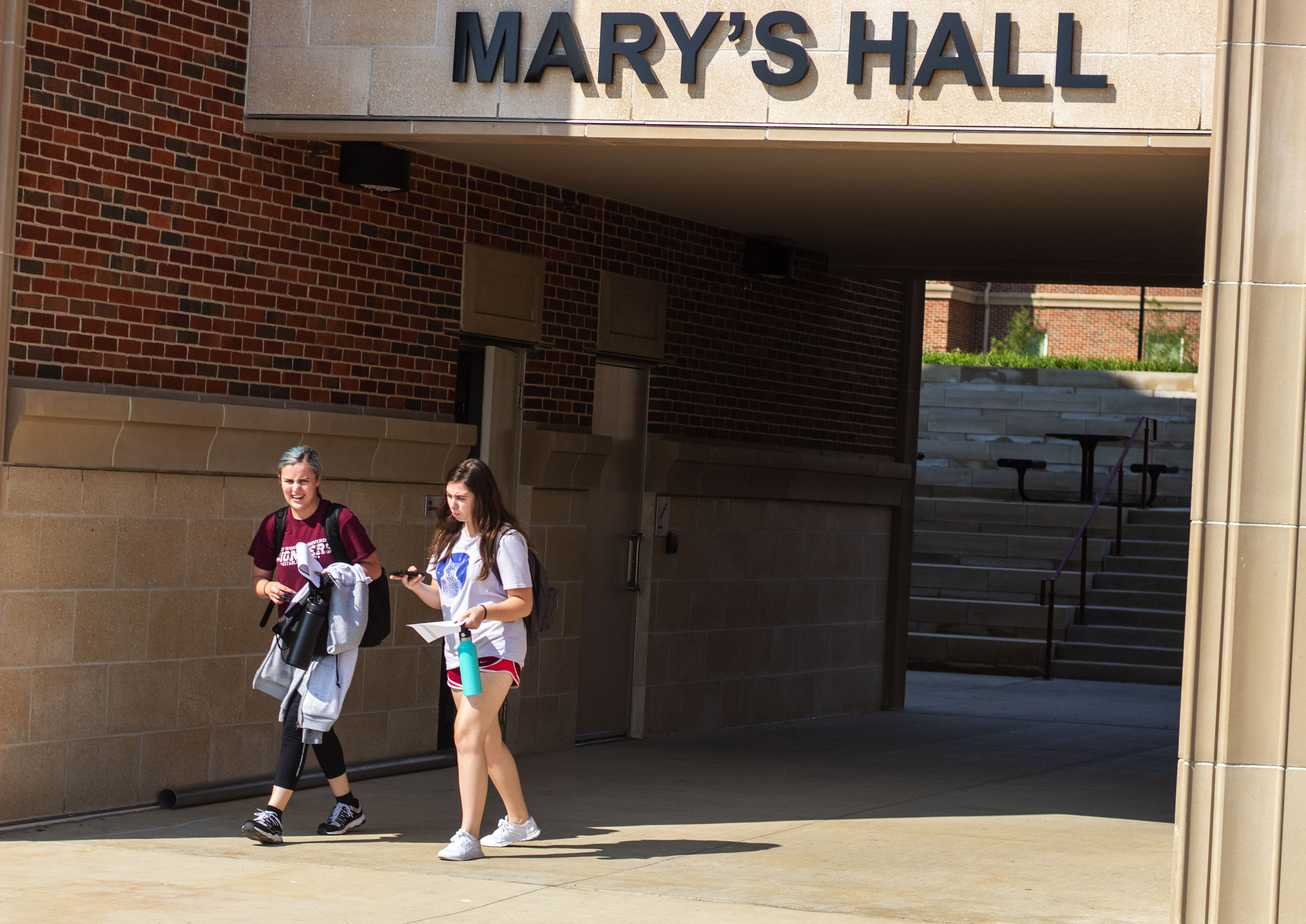 Just four weeks after the grand opening of Texas Woman’s University’s new housing complex for sophomores, some residents are making plans to move out.

Students said doubts about remaining in Parliament Village have mounted over their first month in the complex, chief among them flooding during the first week of classes. The first floor of all three residence halls in Parliament – North Hall, South Hall and Mary’s Hall – flooded during a heavy rain Aug. 30. Water pooled in hallways and stairwells near exit doors, overflowing into a staff apartment being used by contractors and an occupied student dorm room in North Hall.

Water flowed into the students’ room from the pump room next door, seeping under a shared wall. Rainwater also accumulated throughout the grounds, with surface flooding surrounding buildings.

“Water got in this pump room enough to cover the floor, and it was there for two hours before we found out that what happened is there’s an apartment right next to it, and it leaked under the wall into that apartment,” Director of Construction Services Don Strickland said.

Surface flooding occurred partially as a result of unsettled mulch clogging drainage pipes and – in the case of outdoor rainwater accumulation – because of the location of the complex, administrators said.

“The buildings are somewhat in a bowl, there’s no question,” Jill Eckardt, director of University Housing and Dining said. “Some of it is just the plot of land.”

Contractors are currently sealing the pump room with waterproofing materials to prevent leakage into adjacent rooms if the space floods again and installing outdoor grading and trench drains to direct rainwater away from exterior doors, Strickland said.

Robert Ramirez, associate vice president of Facilities Management & Construction, said an adjustment period is to be expected in a complex as new as Parliament.

“You know, in hindsight, if we were planning for this kind of flash flooding a little bit better, yeah we could definitely be a little critical, but overall these improvements are actually pretty minor,” Ramirez said. “We always just try to respond the best we can, but between the site just being new, areas literally were so fresh they ran off and they clogged some drains, you can’t really plan for that.”

Though there have been reports of water entering only one room in the facility, which is home to 872 students, residents say flooding is not the only concern they have with Parliament Village.

“The bathrooms aren’t gender-inclusive, and I think that’s a very big deal,” South Hall resident Jamee Jo McDaniel said. “I have a friend who is transgender. They identify as male but for housing reasons, identifies as female, and where are they supposed to shower or go to the bathroom?”

Though there are men’s restrooms on the first floor of each building, residents said their location requires them to accompany guests so they can gain reentry to residence floors, and nonbinary residents are left without viable options for showering.

Eckardt said she feels the design of the stalls helps mitigate privacy concerns.

“It’s kind of like a Buc-ee’s bathroom where there’s a solid door in each of the stalls,” Eckardt said. “I guess I saw that as- potentially- a way to address some of those concerns.”

Residents said several minor issues have culminated in creating an uncomfortable living experience. There have been complaints of spiders in      North Hall, no convenience store in the complex, no thermostats and a lack of floor space in rooms.

Administrators said they have no knowledge of work orders for pest issues and that pest control treats the complex every Thursday.

What residents see as a lack of amenities is      simply a difference in design, Eckardt said. With Parliament featuring more community spaces per floor than other residence halls and an experiential “maker space” with 3D printers, Eckardt said Parliament has plenty to offer residents, and additional features like private bathrooms would have resulted in a substantial cost increase for the university and residents.

But with residents already paying up to $800 more per semester in Parliament than in Guinn or Stark, and sophomores being required to live in the complex if they do not qualify to commute, students said they expect more.

“We have community bathrooms, and there’s these issues, yet it still costs more than Guinn and Stark where we had no issues, we had no pests, and we had no flooding,” North Hall resident Raven Gallenstein said. “I know me and my roommate are going to have to move out next semester. We’re going to break our contract because it’s going to be a lot cheaper for us to live off campus in an apartment, now that we’re both juniors and eligible to move off campus after this [semester].”

Despite their concerns, residents said there are aspects of living in Parliament they enjoy.

“They do have a really nice kitchen, it’s way more open and it’s maybe twice to like three times the size of the one in Guinn, which is fantastic,” North Hall resident Cameryn Urbanosky said. “The whole front area is really nice, and then they have a lot of nice amenities and stuff, like, they have hammocks for us, and ping pong tables. Everything looked good, I think they just weren’t quite ready for us.”

Eckardt said dissatisfaction among some residents could be heightened by preconceptions about moving into a newly built space.

“When you move into a new building, you have high expectations, rightfully so,” Eckardt said. “It’s a brand-new building, it should be shiny and new, and everything should work. But until somebody’s actually in the space, you don’t necessarily know all of that [issues].

“I don’t think we could please everybody.”

Amber Gaudet and Garett Gantt can be reached via email at agaudet@twu.edu and ggantt@twu.edu.