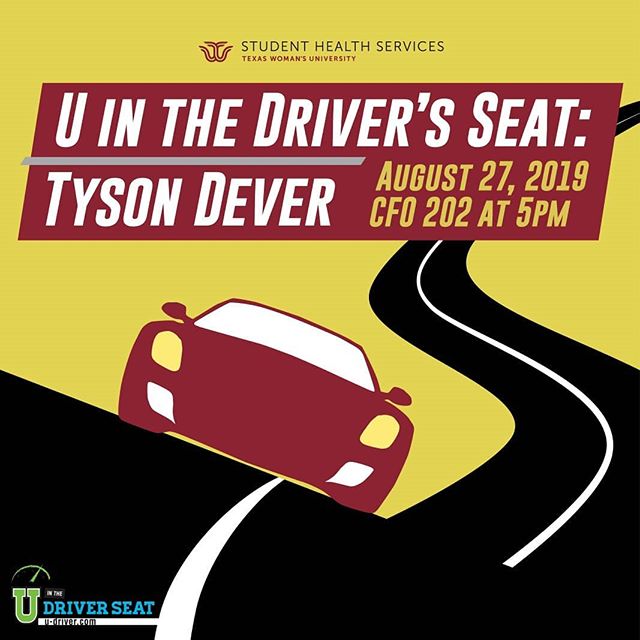 Teacher and varsity coach Tyson Dever spoke at Texas Woman’s University last week where he talked about the adjustments he had to make to his day-to-day living after surviving a severe car accident years ago.

During TWU’s “U in the Driver’s Seat” event, held Aug. 27, self-proclaimed motivator Dever spoke on the day his life changed forever and how he has used the experience to further motivate not only him, but also those around him.

At “U in the Driver’s Seat,” Dever began the evening by showing the audience “The Monkey Business Illusion,” in which viewers are asked to count how many times a basketball is passed between players in white shirts among a group of six people. The tactic was to make the viewer focus only on the players, causing them to most likely miss any changes or unusual occurrences within the scene. The audience directed so much of their focus towards the number of times the ball was being passed, many missed the person in a gorilla suit who walked in between the six players on the court and walked off.

“That gorilla represents unseen opportunities,” Dever said. “These unseen opportunities appear on a daily basis that we have to see to recognize, but we’re often too distracted to realize them.” With that, Dever went into his journey thus far and how he’s continued to live life to its fullest potential.

March 11, 2005, Dever had decided to take the backroads of San Marcos, Texas to avoid city traffic. While on the country road waiting to turn left, Dever was struck by a distracted driver in a 33-ton cement mixer truck, totaling his car and leaving him in critical condition. He was left paralyzed from the waist down.

Paramedics managed to get him to the hospital and into surgery 14 minutes after the incident occurred. Dever went through five surgeries that day and was told he had only a 1 percent chance of ever walking again. He remained in and out of the hospital receiving treatment and physical therapy for five months.

“In a matter of seconds, my life was changed forever over something that wasn’t even my fault,” Dever said.

Despite his hardships, Dever said he has refused to feel sorry for himself. Although changes in life may happen, good and bad, Dever believes it is how we portray them that makes the difference.

Having a disability did not stop him from allowing him to reach his dreams of becoming a sports coach, which he had been wanting to be since he was little.

Dever found purpose in his position as a coach and used it as an outlet to uplift students who may have been experiencing hard times in their lives.

“Maybe they’re having a terrible home life or maybe they’ve got things going on in their life,” Dever said. “Whatever the case, I wanted them to know that their troubles don’t define them. I wanted to coach them to be the best that they can be.”

Dever said that a sense of harmony came with not only being the sports coach he had always wanted to be, but also a support system for those he cared about.

“You can either feel bad for yourself and watch your life go by, or you can decide to do something about it and change your life for the better,” legal studies sophomore Rahel Tesfaye said in response to Dever’s optimistic approach at making it through life’s low points.

Near the end of his speech, Dever mentioned the importance of staying focused when driving and how minor distractions can result in major consequences. He spoke to the audience, asking for one thing from each of them- to be the change.

Published in Community and Uncategorized