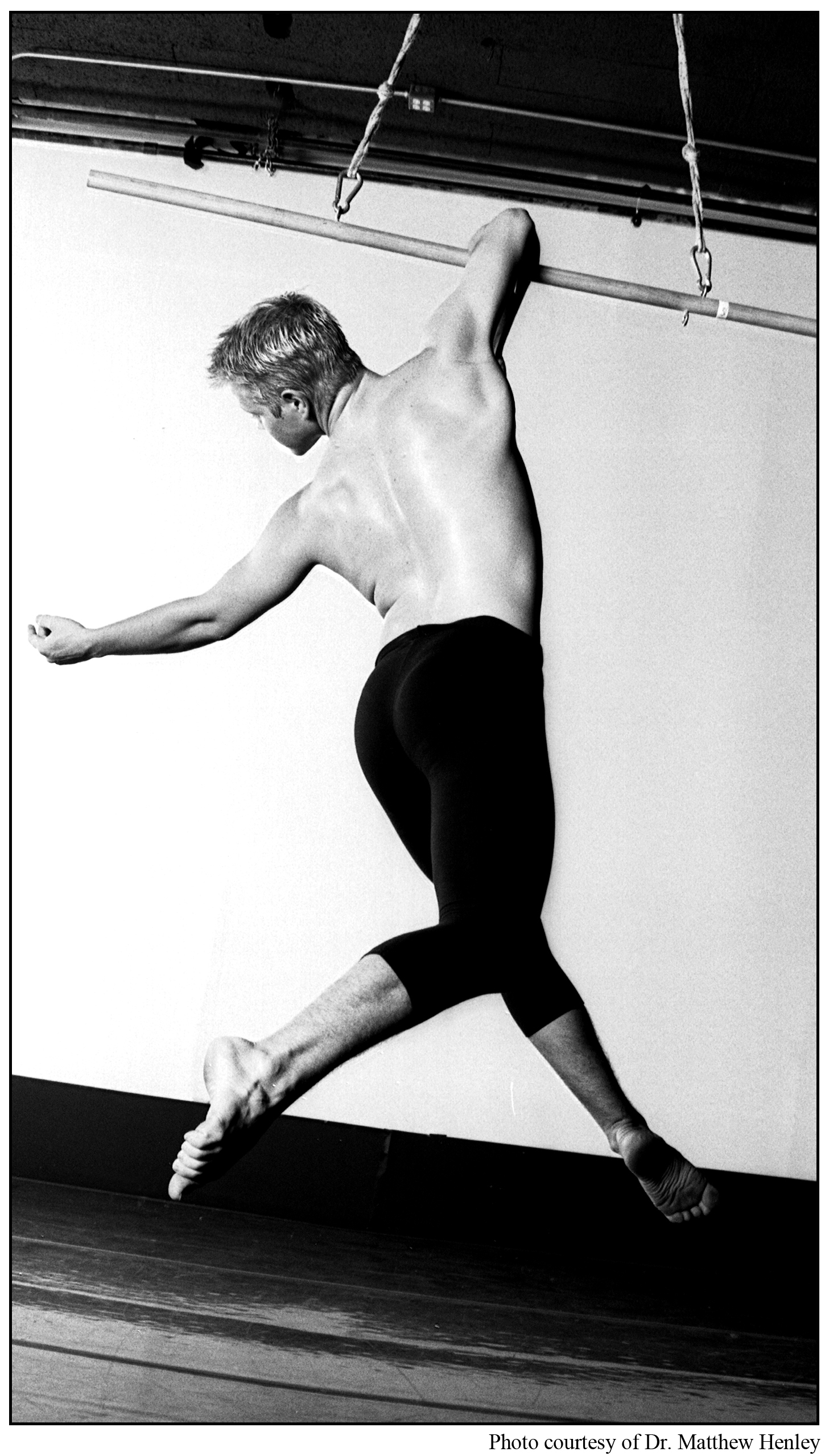 TWU’s associate professor of dance Matt Henley is a unique presence in the Arts Department and at the university itself. Henley joined the university faculty in the fall of 2013 as a visiting professor and became an assistant professor the following year, and he has contributed his expertise to his field.

Henley stated: “I came to TWU because the job’s really well-suited for my background; we have an undergrad program, an MFA program – I was a professional artist, so I can help students as they’re looking to become professional artists, and I have a PhD, and there’s only five programs in the country that have a PhD in dance, so this is one of five. I can also use my research background, so it’s a good mix for me.”

Asked what he enjoyed most in his time at TWU, Henley shared: “I think it sort of has to do with the opportunity to bring all the parts of my professional life to the job.”

He added: “The ability to rely on all sorts of parts of my background and be able to use them to teach students at all different levels is really satisfying for me.”

Henley’s educational and professional background is extensive. He elaborated: “I have undergraduate degrees from the University of Arizona in dance and religious studies. I worked in New York for eight years, so I was studying and working professionally there. My Master’s and doctorate degrees are from the University of Washington in Seattle. I’ve been pretty happy. It’s not anything like I would have imagined my trajectory. It’s been cool. I’ve been able to teach and perform in Scotland, Hong Kong and Grand Caymans and perform all over the country.”

Sharing his fondest memories of his personal and professional life, Henley said: “It’s funny. My fondest memories are when we’re on tour, and my friends and I would always do the USA Today crossword over bad coffee in hotel lobbies. For some reason, I love that a lot.”

He added: “I remember I worked in Grand Cayman for a month setting a dance on a group of young dancers there that we then took to Aberdeen, Scotland for an international youth arts festival. That was cool, to be in Aberdeen and see women’s folk choirs from Norway and contemporary youth dance companies from the Ukraine and 27-person steel drum bands from Trinidad and Tobago.”

Henley also shared: “I performed at New York City Opera a lot when I was in New York, so to perform in Lincoln Center for thousands of people on a big opera stage was fun.”

Henley has an extensive career as an educator as well. He related: “I did a lot of arts and education work while I was [in New York], so I would teach all over the city, like at some rough junior high schools in the Bronx. To see those kids get excited about taking dance classes or becoming interested. They think of dance in one way, but to be introduced to it in another context that they found exciting was really cool.”

Henley said of his approach to teaching: “I’m passionate about it, and I understand that not everyone else is, so I try to find ways to make it engaging to everyone but also to offer enough beyond that so that people who are also passionate about it can see deeper ways to keep going.”

He continued: “My doctoral work is in educational psychology. I’m interested in how the body participates with learning and thinking and communicating. My dance background is in the arts, but I’m also interested in that same stuff in the world of education. Right now, the Quality Enhancement Program’s logo is ‘Learn by doing,’ and that’s essentially what I study, the cognitive and neurophysiological underpinnings of what it means to learn by actually physically engaging.”

He also added: “I think there’s a lot of intelligence contained in the body and expressed through the body, but a lot of times intelligence is assessed through your ability to read and write, like if you think about standardized tests or writing papers. We’re always assessing and valuing our students on how well they write, but not everyone writes the same. Language can be a challenge for some people, but I don’t think they should feel dumb because they can’t write very well. They might manifest their intelligence in another way, so I try to reinforce that message.”

Henley shared that the size and student population here at TWU has helped to make the university an ideal environment for him. He explained: “Coming from the University of Arizona and the University of Washington, which are both 40,000 undergrads – it’s like a UNT-sized campus – so coming here, I’ve felt a lot more connection, not only to faculty in other departments, but also with administration, other staff and other entities on campus. It feels like TWU is a really great size; it’s large enough to where there’s a lot going on, but it’s small enough that you can feel connected to all of it, or at least that’s the way I’ve felt. There’s almost a family feel at TWU; it feels like there’s a community.”

Henley also said that he was interested in the work that could be done through the Woodcock Institute. He stated: “I’m really excited about the Woodcock Institute. I’m hoping to begin doing some more research. A lot of that money comes from royalties from a standardized cognitive assessment, so I think it would be interesting to have a bunch of dancers take that cognitive assessment and look at their results, if they differ in systematic ways from a ‘normal’ population. I’m sort of getting research started again.”

Speaking on upcoming projects for the dance department, Henley said: “There’s an activity called place-making. It’s when artists collaborate with city or state agencies to think about how the arts can participate in how a city identifies itself or wants to brand itself. Denton is such an interesting place right now, in terms of shifting demographics and current issues. You have fracking, downtown has been redeveloped, and there are all these different class and age and race groups, all sorts of things that are going on. We’re talking about the ways in which the arts, and dance in particular, can bring some people’s stories to the front. Individuals or small groups of people, sometimes their stories get lost, and dance is a really great way to embody those stories. We’re thinking a long-term project, like over the next couple of years.”

He added: “Just south of campus is Quakertown Park. It used to be a small town of freed slaves, as they came out from further east. They settled there. It’s tied into the history of TWU. TWU was just a finishing college when it first started. All the families lived downtown, and they didn’t want their daughters walking through Quakertown on their way to school, so they evicted all of those people and moved them to the other side of the tracks and built a park. It’s this really interesting history that’s part of TWU and part of this area. [Associate Dance professor] Sarah Gamblin takes her choreography students out, and they learn the history of the site. There are old maps that show where things used to be, like where the butcher used to be and where the church was. They go and think about what it is to combine history, your experience and others’ experience. There are things we’re doing that we’re building on for a larger sort of project.”

Published in Campus, Community, In print and LATEST