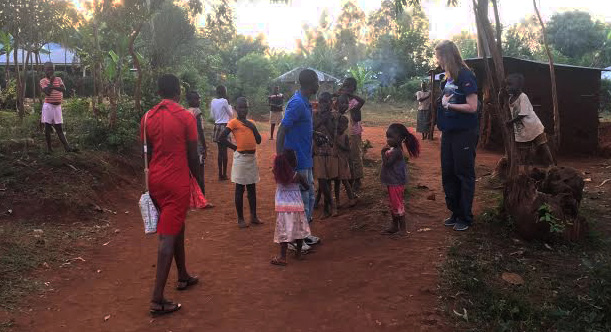 Walking through the dirt streets of Menara, a Kenyan village, Lauren Jones made her way from the clinic to her firsthome visit of the day to see what medical aid she could provide.

Jones, a senior Nursing student, and ten other nursing students from TWU’s Dallas campus served on a medical mission in Kenya over the summer break. These students decided to serve after hearing about TWU Dallas professor Nola Schrum’s organization, Bless the Children African Missions.

Jones said: “This was something I always wanted to do as a kid so when Mrs. Schrum told me that it was going on I said ‘let me know what I need to do and I’ll be there.’ I was never scared, I was just so excited to have the opportunity to go.”

Working in teams, the medical missioners ran clinics in a central location and dispatched personnel to visit villagers in their homes accompanied by translators.

Schrum said: “The students triaged patients and they would assess them and get a history and then they would decide on a medication that was appropriate. They had supervision by seasoned, experienced nurses and faculty. They saw many, many sick people with malaria. I saw more sick people this year than I have in ten years.”

Jones and her classmates encountered villagers with dehydration, HIV and AIDS, hypertension, dermatitis, intestinal worms, arthritis, infected cuts and impaired eye sight among other ailments. Jones explained that only villagers with money to spare or who had extreme medical problems, such as a stroke, were able to seek medical attention throughout the year when a clinic did not provide free care, leaving some villagers to sufferfrom tooth aches or stomach pains for years.

Jones said: “I think what was most unexpected to me was the emotional impact. In the medical field,we learn about death and we knock on death’s door — almost every clinic, you stand between the door of somebody passing over to the other side and saving their life.  To be amongst that population of people and for them to be so vulnerable and to have nothing — a lot of them didn’t even need medical care, but just you being TWU nursing student Kristan Kessler speaking with children between visiting patients in their homes in Kisumupresent. I think it surprised me that we were needed in other ways besides medical care.”

TWU’s team of medical missioners were also given the opportunity to visit an orphanage in the Kisumu slum for children three to 14 years old living with HIV and AIDS.

Jones said: “We walked through stinking sewage, trash and garbage, through these dirty slums to get to this tiny school and I cried from the bottom of my stomach, like I’ve never cried before. It was amazing to see a place that thrived for children amongst turmoil, and was just something that I’ve never Photo courtesy of Lauren JonesPhoto courtesy of Lauren Jonesseen or experienced before. These kids were so happy even though this was the second biggest slum in the world. It was kind of like a piece of heaven in the midst of hell. It was amazing, I’ll never forget that.”

Schrum explained Jones and her peers from TWU demonstrated excellent nursing skills while working in Kenya.

Schrum said: “Their skills increased, their confidene increased, they were marvelous and I can’t say enough good things about them.”

Published in Campus and Dallas & Houston