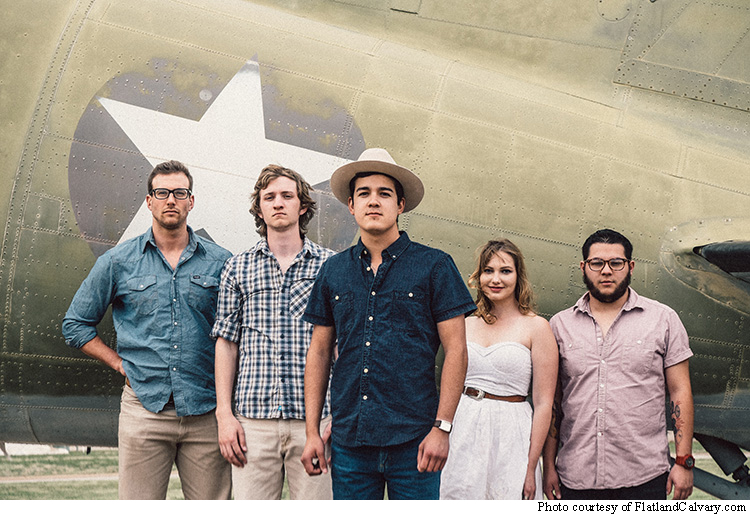 A week away from their first album debut, the rising country-folk-Americana band from Lubbock, Flatland Calvary hit the stage at Rockin’ Rodeo Denton last Friday.

They released their first recording “Come May,” almost a year ago. Since then, Flatland Calvary has been playing shows in the Lubbock area and is now hitting the road on the weekends to play at venues across Texas. Vocalist and lead guitarist Cleto Cordero shared: “We are literally like a family. We treat each other like brothers and sisters and we hang out even when we are not playing.”

In their five-song EP, Flatland Calvary offer lyrics “[longing] for intimacy, inevitable heartbreak and the occasional summer fling” to their listeners with an unforgettable sound that pulls listeners back for more.

Cordero shared: “I want to write stuff that hits people in the feels. It doesn’t have to be sad, it could be everyday stuff. I always tell everyone that I am a terrible liar, so 99 percent of the songs I write are about  something that either I’ve been through or someone I know has been through. Songs that you hear and you think ‘I have to hear this again,’ that is what I want to write.”

On Friday April 1, Flatland Calvary will be releasing their first full album, “Humble Folks,” and they will have a CD release party at the Blue Light Live music venue in Lubbock. The band has released a single from its new album, “February Snow,” which can be found on their website for free.

Their unique sound holds true to the “easy on the ears” part of their mission while their lyrics complete the “heavy on the heart” goal absolutely perfectly.