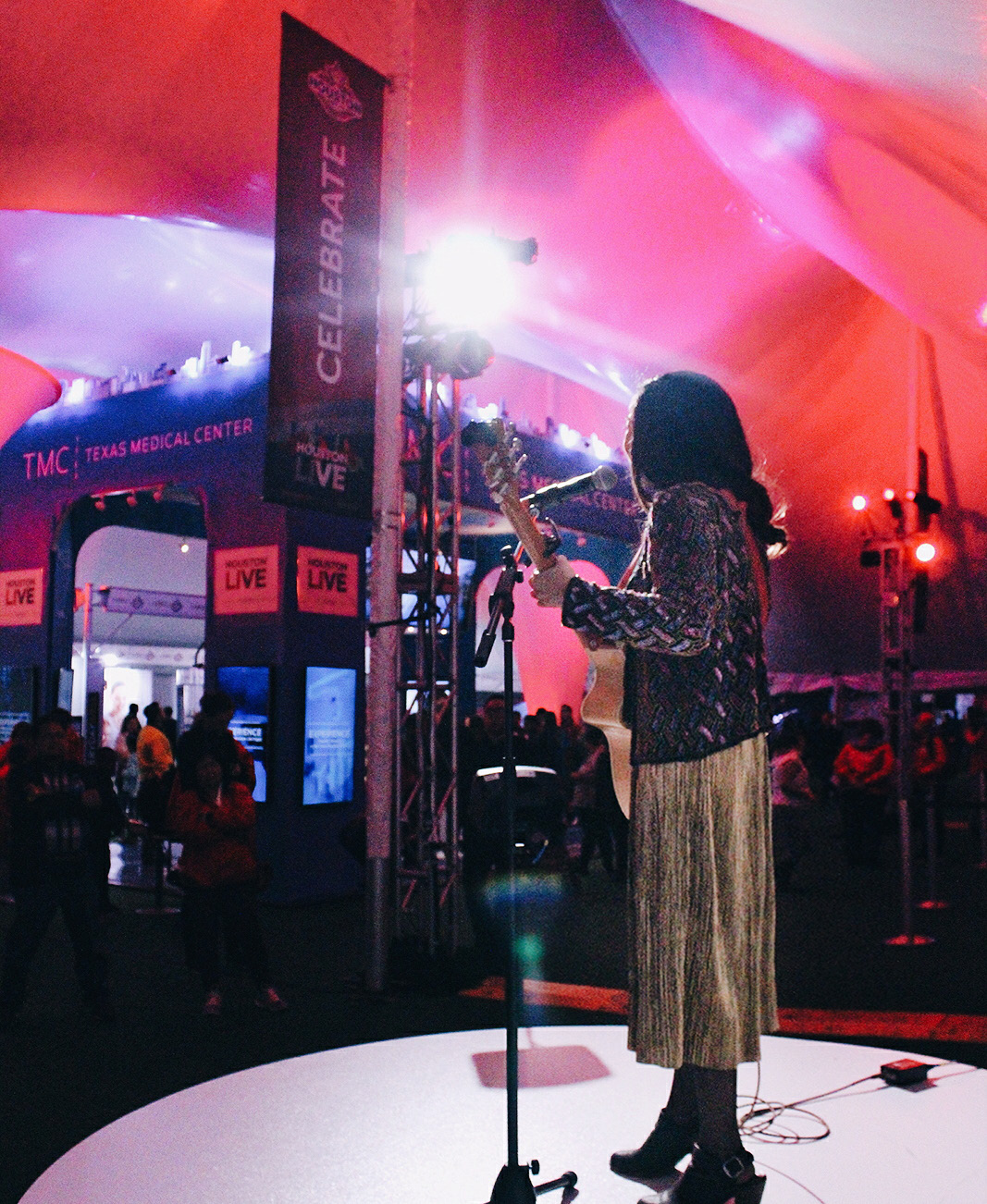 Finding herself among 400 individuals auditioning for the first Super Bowl Festival, TWU alumna Ressa Gallardo was ecstatic upon becoming one of the 75 chosen to perform at the Houston LIVE Exhibition.

Beginning her musical career as a child signing karaoke at Filipino family gatherings, Gallardo ignited a passion that carried on into singing at her local church and choirs and even picking up gigs at weddings and parties. Gallardo reflected on her childhood and said: “I was intrigued with how music could bring so many people together, and that was what inspired me to perform as a child.”

Fast-forward a few years and Gallardo found herself enrolled in her first college guitar music course that soon enriched her musical performances, specifically during her solo performances.

Enrolling into TWU’s Music Therapy program, Gallardo initially wanted to utilize her Music Therapy degree in the acute care setting to treat premature infants. However, her current interests are leading her to consider going back to graduate school and setting up a private practice to accommodate a wider client population.

Gallardo added: “Pursuing the degree I’ve chosen opened my mind to how much music impacts our society and the way it can positively change a person. The music skills I’ve gained and improved from studying at TWU led me to becoming a more confident musician.”

Among the six universities offering a Bachelor of Science in Music Therapy, TWU’s program may be competitive and tedious, but Gallardo encourages current students to “utilize and harvest all the skills you’re learning in college, because music is such an influential art form that can open many opportunities for you in the future.”

Having graduated in May of 2015 with a Bachelor’s of Science in Music Therapy, Gallardo took a small absence from performing and chose to spend some time traveling instead. While in Asia, she came across some advertising for the Super Bowl Festival. However, it wasn’t until a few weeks later that Gallardo realized her schedule was flexible with the audition dates, so she decided to audition for the festival. Gallardo said, “I knew this was going to be one of the best performance opportunities of my life.”

Being excited to perform on a national venue such as the Super Bowl Festival, Gallardo added that she was also a bit nervous and that “if someone told me I would get the chance to do this opportunity a year ago, I would not have believed them. That’s Villavasohow surreal and meaningful this opportunity is to me.”

Gallardo began her performances at the Houston LIVE Exhibition on Sun., Jan. 29, with a following performance on Tues., Jan. 31. She will continue to perform on Thurs., Feb. 2 and Sat., Feb. 4 prior to the 10-day festival’s closure on Super Bowl Sunday. Gallardo’s performances will include acoustic renditions of hits from popular artists like Adele, Jason Mraz and Charlie Puth.

The Super Bowl Festival is in its initial year of establishment and is a 10-day festival leading up to Super Bowl LI. The festival performances include Houston area music artists like Gallardo, as well as dancers, jugglers, poets and magicians. Gallardo commented: “Performing in the Houston LIVE Exhibition at the Super Bowl Festival led me to meet so many other great talents in Houston. I never knew my home city had such a huge variety in talent.”

Super Bowl LI will take place on Sun., Feb. 5 between the New England Patriots and the Atlanta Falcons. Kick-off is scheduled for 5:30 p.m.