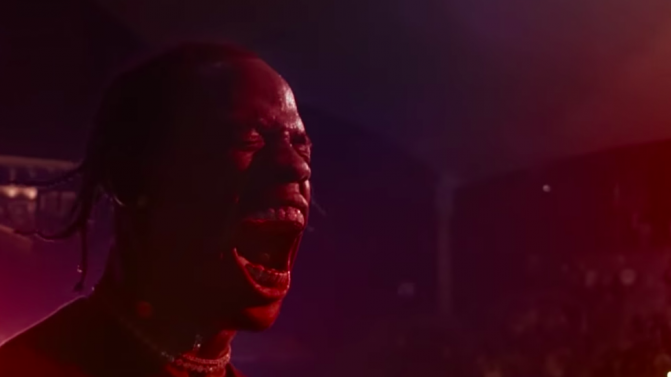 Travis Scott’s new Netflix documentary, “Look Mom I Can Fly.” provides a surface-level look into the rapper’s life and is not worth your time.

Many of Scott’s fans were excited to see a behind the scenes peek into the life of their favorite rapper, and so was I. While I would not call myself a fan, I was interested in seeing the making of his 2018 album, “Astrowold,” and learn more Scott as an artist.  Besides the few songs of his that I like and his having a daughter with Kylie Jenner, I do not know that much about Scott, and I was hoping that the documentary would provide insight.

But I was disappointed. The whole point of a documentary is to provide viewers a deeper look into a topic they may not know about. After watching the 1 hour and 25-minute film, I finished the documentary confused.

My main issue with “Look Mom I Can Fly” is that it had no structure. I know the intent of the movie was to showcase Scott’s journey with fatherhood, creating Astroworld and controversy, but it was basically random clips spliced together.

Besides a random stage montage of Scott jumping into the crowd shown at the beginning of the film, viewers are not really introduced to the rapper. Many of the moments in the film felt thrown in. The documentary did a bad job of introducing and transitioning into new clips.

One moment you are watching him talk about the old room he shared with his older brother at his grandmother’s house, and the next clip shows him getting on a plane to go to a show. Before you can even take in what is going on, the scene changes to something completely different. The film does not really explain why he’s at his grandmother’s house, and this continues to happen throughout the documentary.

Every aspect of Scott’s life is glazed over in the film. I cannot imagine what it would be like to watch the film as someone who didn’t know who Scott is. I was barely able to survive with my minimal knowledge of Scott.

Despite the horrible structure of the movie, I will admit there were some good moments. Stormi Webster is one of the biggest stars to come out of the film. All of the decent clips in the documentary always included Scott’s interaction with his daughter and family.

Astroworld is an old amusement park that Scott loved to go to as a kid, and I thought it was great that the movie provided a couple of flashbacks of his childhood. I wish the film expanded on more of those clips.

The only time in the documentary where audiences can see a different side to Scott is when he is with his family. Towards the middle of the film, there is a scene where Scott carries Stormi as he is watching the crowd before a performance. As he and his daughter are looking over the crowd, there is a flashback of Scott’s mother carrying his as a child.

The clip ends with the crowd chanting Stormi’s name, and honestly, I wanted to bawl my eyes out when I saw that. At that moment, you can tell he is happy to share this with his daughter.

Besides the few good moments sprinkled in the Netflix special, “Look Mom I Can Fly, “ is not worth your time, and you are better off just crossing it off your must-watch list.