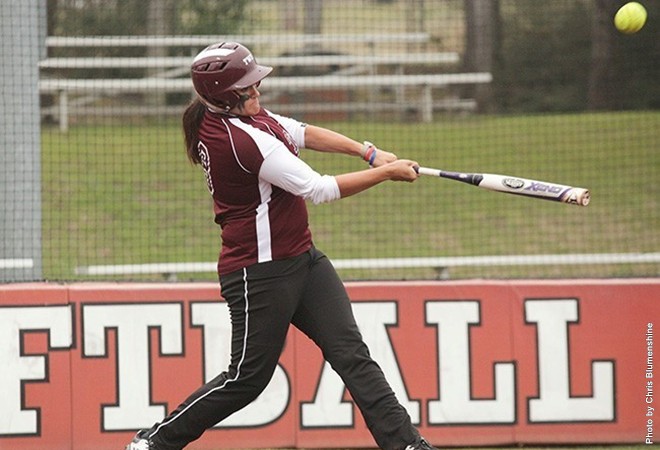 The first two home games of the softball season added two more wins to the Pioneers record after beating Saint Edward’s University on Feb. 28. Even after a two week break from competition, the Pioneer’s preformed up to standard and Head Coach Genny Stidham believes they will do well this season and in conference play.

In the first game, junior Tori Brice pitched for the Pioneers, allowing only one hit by the Saint Edward’s University Hilltoppers, a home run in the first inning. After that Brice and the team kept the Hilltoppers from scoring again for the rest of the game. The Pioneers scored six runs on the Hilltoppers throughout the fourth, fifth and sixth innings leaving the game with a six to one victory.

Coach Stidham explained: “I think I got really excited the first game when we came out with bases loaded  and we didn’t give up a run, that’s a game changer right there. [Laura] Mabary’s throw to get the girl out at second, that’s pretty exciting too. There were several plays today I really enjoyed, I enjoyed both games.”

In the second game, the Pioneers fought hard and won again with a score of nine to three. Junior Hailey Dixon pitched the game and Nicole Nordie, Laura Mabary and Melanie Stephens helped the Pioneers score with 3 RBIs each.

The Pioneers worked together well on base. Occasionally, a batter would hit a ball that the Hilltoppers caught, causing that batter to take an out for the team, but the Pioneers used this to advance runners on base, rather than get one player on first base – one of the many strategies Stidham believes can help the team during this season.

Stidham stated: “If we are going to have a successful season the pitchers have to throw well. But our team has to do what they know they’re capable of, which is moving runners, and we have to continue to stay unselfish in the matter if we’re going to give up ourselves to move base runners. So I think if the team stays true and the team puts the team before all those individuals I think we’ll be successful.”

In anticipation for conference play, Stidham and the team will be observing Tarle- ton’s pitcher and working on how best to play against the TexAnns. Stidham added: “[We will] continue to work on our defense and still work on our hit-and-run game and hopefully we’ll know about stealing bases better than we did today. We haven’t had an issue, but today we didn’t quite steal as many bases as I [was] anticipating.”