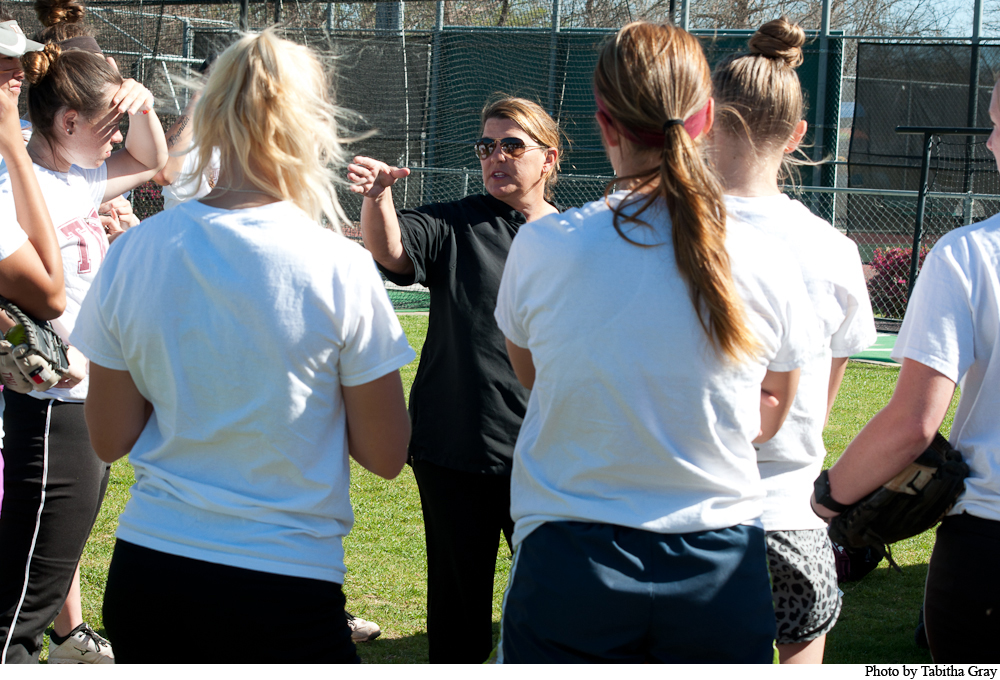 Softball Head Coach Genny Stidham is in her third season with the Pioneers and currently holds a 62-41-2 overall winning record at TWU.

Stidham began her coaching career as a graduate assistant in 1995 at the University of Central Oklahoma, where she was also a player during the 1991 and 1992 seasons.  In 1997 she became the head coach for Central Oklahoma where she coached for 16 years. During her time at UCO, Stidham lead the Broncos to two Lone Star Conference championships, seven trips to the NCAA tournament and took home the national championship during the 2013 season.

In her first seasons at TWU, Stidham led the Pioneers to the LSC Championship Tournament and the NCAA South Central Regional Tournament. She was also awarded the LSC Coach of the Year after last season.

During and interview with The Lasso, Stidham shared why she wanted to become a coach. “It’s one of those things I have known my whole entire life,” she said. “Softball was the sport that I loved and I knew that was something I wanted to do.” She added, “I like strategy and working hard. My favorite part is watching the girls succeed, whether it is learning a new pitch and striking a girl out on it or working hard to hit behind a runner and execute a hit-and-run.”

While coaching at UCO, Stidham had numerous successful seasons and had an overall record of 465-289-2. After winning the national championship in 2013, Stidham became head coach at TWU. “I feel like I accomplished a great deal there [UCO] but it was just time for a change, something new.” Stidham said. “I also liked the fact that Chalese Conners was a female athletic director and [TWU] was primarily a woman’s institution. I decided this was a good place to be – and it is.”

Stidham’s coaching style is dependent on the types of the athletes on the field. Last season TWU recorded dozens of home runs, and this season they have recorded dozens of stolen bases. Stidham explained: “You’ve got to bring young ladies in and you have to be able to trust in them and they have to be able to trust in you and develop into the type of athlete that they want to be. I think a big part is bringing athletes into your program that are willing to work hard and be team members.” She added: “If you want to be successful, you have to develop and cultivate relationships with the young ladies that you bring in.”

Stidham added, “As a coach you always want to be the last team standing. The ultimate goal is to win a national championship, but if I don’t ever get the opportunity to do that again, I feel like I am a success if the girls tell me after four years that they are grateful and they made the right decision.”

When Stidham reflected on her memories from the past two season at TWU, she shared some insight from the 2015 season. She said, “The comeback of the end of last year’s season was special. We were at .500 and we weren’t regionally ranked because we didn’t have a winning record. Basically people didn’t expect us to do well and the girls kept fighting. I don’t know how many wins we came up with, but by the end of the season we turned everything around and we placed second – one game out of first. My favorite part was ending out the season and making it to the regional tournament.”

So far in the 2016 season, Stidham and the Pioneers have a 14-8 overall record and three conference wins.