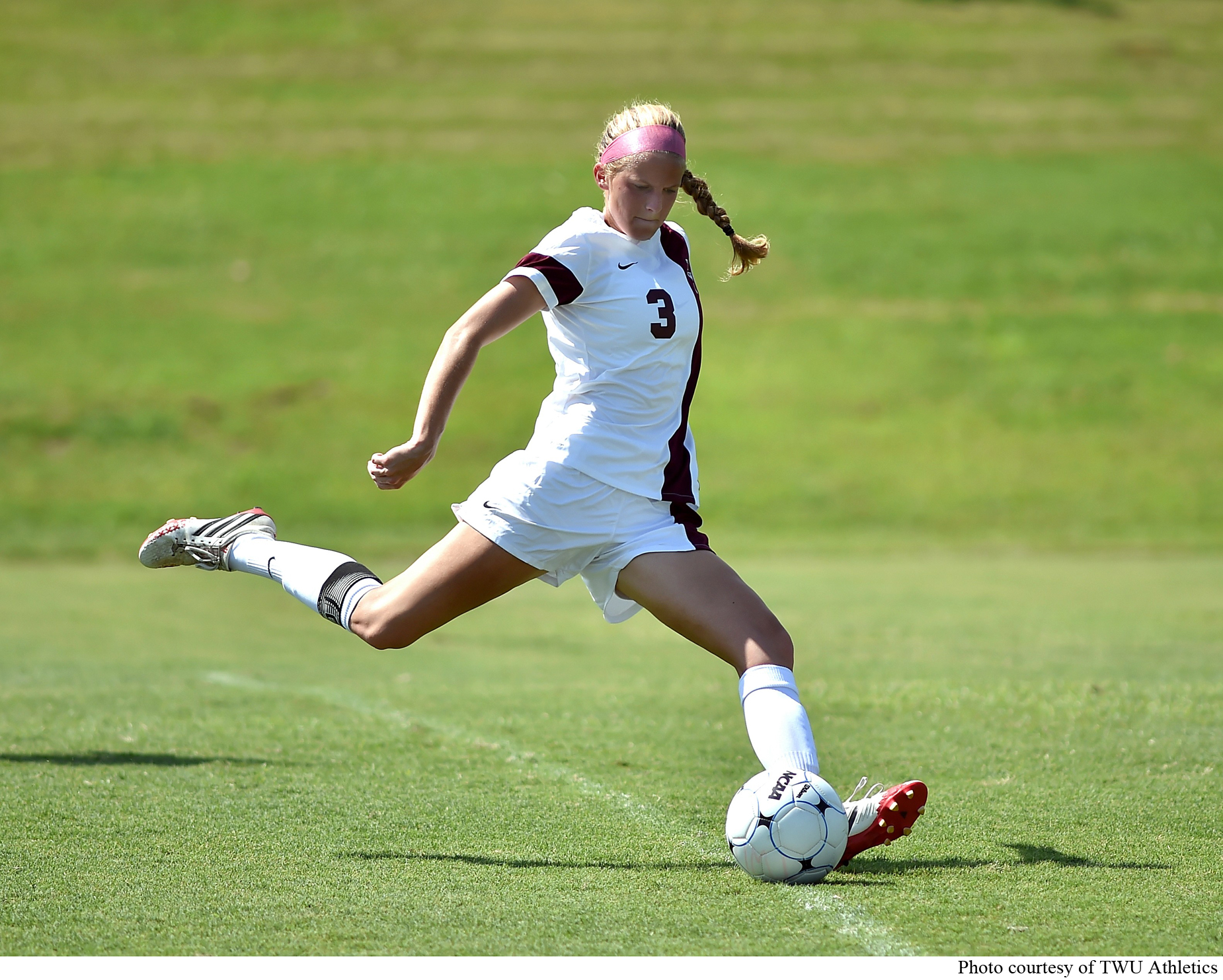 Defender Madison Purdy serves as a captain for her final year as a Pioneer. Purdy is a Mathematics and Education major from Prosper, TX who transferred to TWU after playing soccer for two years at Union University in Jackson, TN. Her parents, Rob and Sally Purdy, helped start her soccer career when she was just five years old.

In an interview she shared: “I went to go watch my older cousin play soccer and I told my parents ‘I want to do that.’ Not growing up around soccer, my dad didn’t know where to start so he actually went to the library and bought a book that was about coaching soccer to the baffled parent and he coached my first soccer team.”

“In sixth grade, my parents made me quit club soccer, because I was practicing three to four times a week including games. [They] encouraged me to try other things like basketball, volleyball, musicals, horseback riding, and skating. I literally tried everything because my parents wanted me to have a fair shot at different things, but I eventually came back to soccer and played on a rec team for a year.”

When reflecting on her career, Purdy mostly remembers her teammates: “The thing that consistently sticks out to me are my teammates and the different players that I got to play with throughout my soccer career.”

She added: “This year we were practicing in Colorado and a tarantula was on the middle of our field. It was really funny; we spent 20 minutes trying to figure out how to get it off so we could practice. Then in the middle of our practice, another one crawled on the field.”

When explaining her transfer Purdy said: “I was looking at schools closer to home in Texas. I picked TWU because of their soccer program and I want to be a math teacher. I always remembered seeing TWU diplomas in my math teachers’ rooms so I knew they had a good math education program as well.”

To balance soccer and classes, Purdy tries to plan classes around practices, games, her position as a young life leader and also her three jobs. She added: “The most important thing is to keep a planner, know what you have in front of you and know when you have pockets of time. This year I have scheduled my classes where I have light days on Tuesdays and Thursdays.”

Purdy concluded the interview with her thoughts on how her soccer career would continue to benefit her throughout her professional career. She said: “Soccer is a team sport, so I’ve learned how to work well with others and that everyone is different and you can’t treat everybody the same. Everyone is motivated differently and it’s important to know how to motivate everyone.”

According to the TWU Athletic website, during the 2014 season Purdy recorded 2 goals, and 1 assists for 5 points, took 19 shots and 10 on goal, made the All-Lone Star Conference Second Team and the Lone Star Conference Commissioner’s Honor Roll (Fall and Spring).

In this year’s season game against Midwestern State University, Purdy recorded the fastest goal in school history. Beating the record of 48 seconds set in October of 2004, Purdy scored 46 seconds after the game started.

Published in Athletics, Features, In print and LATEST