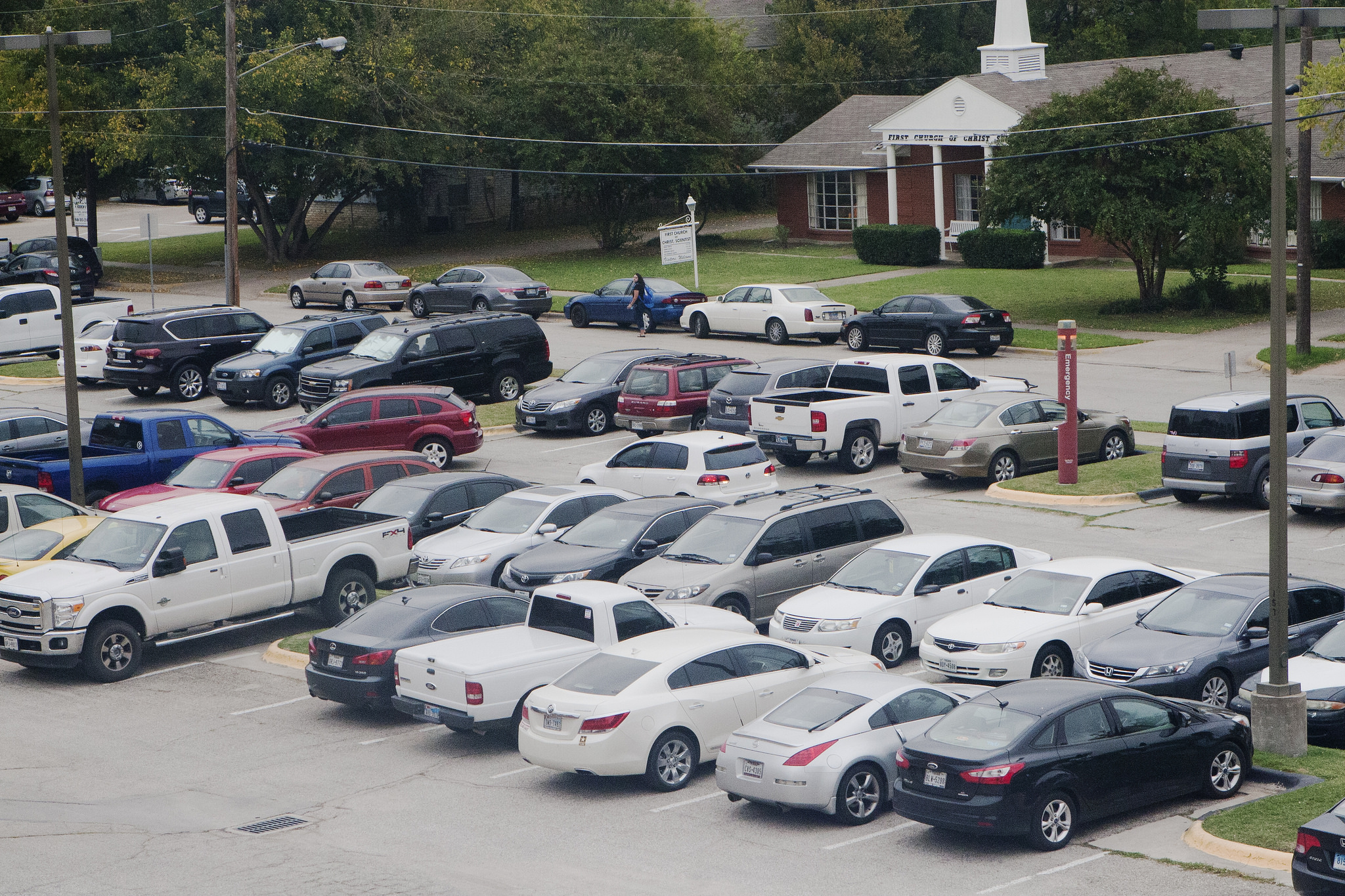 Problems persist as students struggle to find spots, relief may be found in new garage plans

*Originally published in the Oct. 29 issue of The Lasso*

There are very few aspects of college that every person – faculty, student and staff – are affected by. Dining services and reaccreditation are two examples, but a constant problem that grows each year for TWU is parking. As enrollment and car numbers go up, the number of available spots shrinks at the same rate.

On the agenda for the November Board of Regents meeting is a proposal for a new 600-car parking garage.

The issues with parking have risen over the past 10-15 years, with an estimate of eight parking additions or improvements in that time.

According to Vice President for Finance and Administration Dr. Brenda Floyd, there has been a significant push for parking since 2002-2003.

“We have met some of those needs,” Floyd said. “To continue growth, we need to look at other alternatives. There is not an absolute need – we currently have sufficient parking places.”

In the past decade, TWU gained the lot behind the Blagg-Huey Library, the parking lot north of MCL and the commuter lot across from the Arts and Sciences Building. Also, the Pioneer Hall lot was extended north all the way to University St., and houses were torn down in exchange for half of the faculty and staff lot. Just last year, the temporary Frame St. and Pirtle St. lot was installed near the Multipurpose Classroom and Laboratory building to help relieve parking at peak times.

The majority of people at the university know of the old Reagan-Houston lot, also known as the tennis court lot. The lot was originally a temporary lot made of gravel but was made a permanent parking lot due to the increase in parking,.

“When we added the Reagan lot, it was the first time we added a lot in a long time,” Director of Commuter Services Amy O’Keefe said. “That’s when parking really became an issue.”

According to Vice President for Enrollment Services Gary Ray, undergraduate enrollment has grown for the last 11 consecutive years and he is aware that having a car now is considered a necessity.

According to Director of Public Safety Chief Elizabeth Pauley, TWU’s Denton and Dallas campuses have a combined number of 4,205 decal parking spots. When selling the decals, the Department of Public Safety makes it clear that the permit does not guarantee people a spot. However, DPS sold 8,063 permits collectively for both campuses. That is 192.2% of the spots available. The Denton campus contains 3,497 of the decal spots.

“It sounds like a lot,” Associate Vice President, Facilities Management and Construction/Risk Manager Joe Standridge said, “but you have to start thinking about the times and everything. Some days, it’s pretty full, but most of the time, there are plenty of spots out there. Friday afternoons, you could probably have a rodeo out there.”

Peak times for parking have been identified as Tuesdays and Thursdays between 10 a.m. and 1 p.m.

At the same time, drivers with and without decals have been parking street side in the surrounding residential areas, and Pauley recognizes that this has been happening for years. However, parking on these streets may create problems.

“I have not received any complaints or concerns,” Director of Transportation for the City of Denton Mark Nelson said. “Some city officials do see some impacts on the side streets, including Locust [Street].”

To solve some of these issues and prepare for future enrollment numbers, a 600 car parking garage will be proposed at the November Board of Regents meeting.

According to Standridge, the garage would be built in the commuter parking lot across from ASB, absorbing the Marketing and Communications and the Human Resource offices. During this time, the Graduate Art Studios would be torn down and the students relocated into office spaces at the first floor of the garage.

If the garage passes, it would take a minimum of 22 months from start to finish, including approval, bid process, contract approval and building phase. To cope with the removal of parking during that time, there would be a temporary 197-car parking lot erected on the other side of University Drive, west of the soccer practice fields. The temporary lot would have a shuttle running constantly between there and the university.

The parking garage cannot be paid with state funds, and Standridge estimated that the garage would cost around $12 million. Concerns about fees rising would not be a problem, as the source of funds comes from the fund balance money left over from previous years. If fees do go up, the garage is not the cause.

Floyd explained: “There is sufficient money to build the garage if it is approved.”

A contracted company has already begun surveying and analyzing the parking situation on campus and will make recommendations for the future.

The complaint about parking is common among driving students. Commuter Services receives the majority of these concerns, and the number one complaint that goes through the office from students is the lack of parking spots available.

“We need more parking,” junior Jazmine Beadle said. “For a commuter, if you have a class at 9:30 [a.m.], you have to get here an hour earlier just to find parking.”

O’Keefe explained that not all commuters have a flexible schedule that allows them to arrive on campus hours before their class. While doing so can encourage use of the campus resources, this is not an option for all students. After searching for parking, some people may not have time to walk to class.

“On one hand,” O’Keefe said, “it’s not realistic for a university to provide convenient parking at all hours. On the other hand, if people can’t get here when they need to, that’s when I get concerned. And that’s where we are now.”

DPS is responsible for the regulation and enforcement of parking for TWU. However, the relationship between police and parking goes deeper. According to Floyd, 46 percent of DPS’ budget comes from parking fees, both decals and tickets.

“We can survive without the money for the tickets, but it helps,” Director of Public Safety Chief Elizabeth Z. Pauley said. I’ve got three officers right now and possibly two more that I have to ask other departments to pay for their salary and benefits.”

Right now, DPS is operating on 15-year-old figures, and the parking decal fee has not been raised in that same amount of time, staying at a constant $70 for student permits for the academic year. With the parking garage and construction, a company has been called in to evaluate the parking at TWU and the fees. The survey is already under way, preparing new figures for the parking garage and related facets.

Possible alternatives have been discussed, with the top two options thus far being carpooling and public transportation.

TWU partners with the DCTA already to offer reduced fare on the Connect Buses. Students are eligible for reduced tickets and can commute to and from school via the DCTA and DART systems.

One way the university has dealt with the parking problems is through distance learning and off-site locations. Hybrid classes do not meet every week, but may meet face to face on Saturdays when parking is relatively open. Also, class scheduling for the year was more evenly distributed than last.

“We teach classes in Collin County in the Collin Higher Education Center,” Ray said. “There are centers in Plano and we have launched a new center in Alliance so as not to take up a spot here.”

On campus, Commuter Services has created a map of the boundary streets for the Denton campus depicting available street side parking.

Regardless of how the parking problem is addressed, Ray expressed that the Cabinet is concerned with the overall student experience.