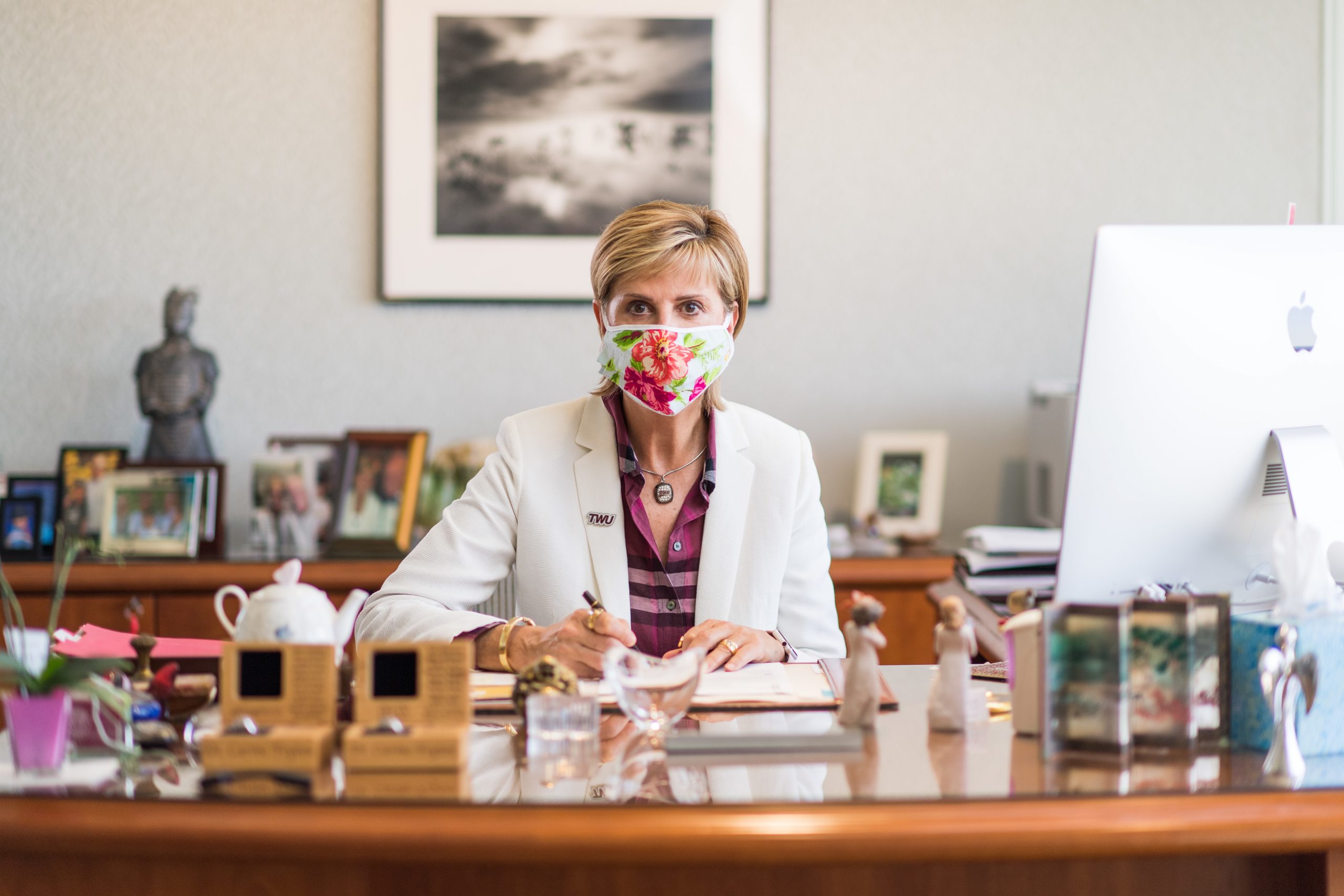 Letter from the chancellor: Writing the story of a more just tomorrow

In his Sapiens: A Brief History of Humankind, Yuval Noah Harari makes the case that storytelling as a form of communication and our ardent belief in those stories—and thus our behaviors, i.e., faith and works—separate humans from all other known species on this planet. He ends by positing that gene splicing, cyborgs, and artificial intelligence lie around the corner as the next story in human evolution. While scientists and philosophers grapple with the technological and ethical challenges of such a future, the U.S. continues to endure plaguing myths of its past.

The myth of hierarchy, for example, as described by Ta-Nehisi Coates in Between the World and Me and, more recently, in Isabela Wilkerson’s Caste: The Origins of Our Discontents continue to play out in tragic ways on national news.

This year, Bryan Stevenson’s Just Mercy: A Story of Justice and Redemption serves as our book-in-common at Texas Woman’s University. Each idea—story, justice and redemption—offer rich dimensions of discovery and within each, we can engage through our own lived experience. In addition to his Equal Justice Initiative, Stevenson’s legacy will include The National Memorial for Peace and Justice in Montgomery, Alabama.

While countries like Germany, South Africa, and Rwanda built memorials to reflect on the atrocities of their past, the United States lacked, until two years ago, any architectural acknowledgment of the more the 4,000 lynchings that Wilkerson describes in The Warmth of Other Suns: The Epic Story of America’s Great Migration.

As you approach what is colloquially known as the lynching memorial it seems familiar, like the columns holding up the Parthenon; but as you enter, what appeared before as columns now hang from the ceiling, evoking disorientation and a profound emotional reckoning. In the spirit of ubudehe—a Rwandan practice of community working together for the benefit of the community—teams collected dirt from each documented lynching site, and builders incorporated that soil in each hanging column. At Texas Woman’s, we have our own history of injustice, as told through the Quakertown story (twu.edu/quakertown). In the spirit of the national memorial and of ubudehe, we are working on a memorial to reflect and heal our collective psyche.

Before the healing can take root, we have to stop the bleeding. Most recently, we are reeling from the shooting of Jacob Blake but also fresh in our hearts and minds is Elijah McClain, Breonna Taylor, George Floyd, Ahmaud Arbery and, going further back in Coates’s telling, Renisha McBride, John Crawford, Tamir Rice and Michael Brown. He says that, “my father’s father was dead and my uncle Oscar was dead and my uncle David was dead and each of these instances was unnatural.”

In higher education, through discovery, learning, service and leadership, we are called to write a new story—our story—a story based on critical thinking and reason. No matter your discipline, you can spend a part of this year taking a serious look at how you might contribute to a new narrative, one built for peace and justice.

In Spanish, vecindad translates as “neighborhood,” but it also holds a deeper, historically rooted meaning. When many Mexican immigrants use vecindad, they express the belief that one person’s struggles become everyone’s struggle, and one person’s success is everyone’s success. This idea is similar to the African philosophy of ubuntu—I am because you are.

These past several months have brought these imported ideas close to home. Safety and success depend on leadership and a commitment from community members to protect one another. This year at Texas Woman’s, I hope you will be part of building vecindad in the classroom—virtual though it may be—residence halls, athletic teams, Greek life, student organizations, and even across our three campuses.

Let the writing of our new story begin with you.

Published in Campus and Opinions