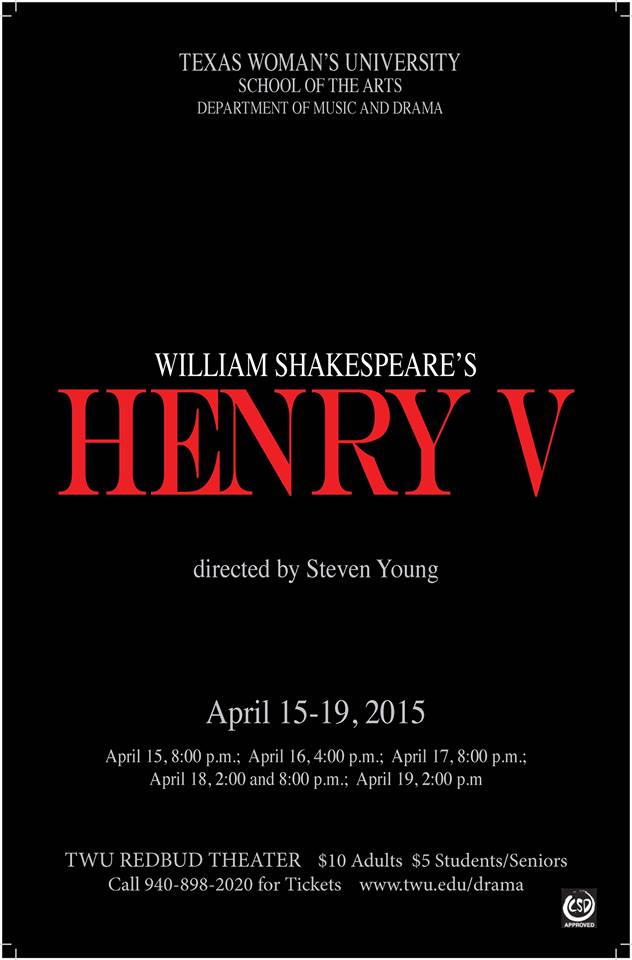 “Henry V” will be playing at TWU from April 15-19 at the Redbud Theater Complex, located next to Hubbard Hall on the Denton campus. The play will be produced at varying times throughout the four days, giving everyone a chance to enjoy the production.

“Henry V” is the well-known Elizabethan historical verse-drama by Shakespeare that tells the story of England’s King Henry V.  The play depicts Henry V preparing for the Battle of Agincourt and the conquests he completes.  It also shows Henry V’s attempt at wooing a French princess. The play treats the audience to some of Shakespeare’s most famous speeches, such as St. Crispin’s Day Speech.

TWU’s drama webpage states: “This exciting tales features thrilling stage combat, wonderful wit, and some of the most rousing speeches Shakespeare ever wrote.”

Assistant professor of acting Steven Young will be directing the play. Young received his Masters of Fine Arts in directing from Illinois State University and has experience in acting, writing, directing and stand-up comedy. He has acted in over 39 Shakespeare productions and has directed over 90 productions in theaters like Cambridge and Stamford Shakespeare Festivals in the United Kingdom and the Chicago Shakespeare Project.

Technical director Michael Stephens will be the set designer; however, faculty, staff and students will all assist in the design process. Assistant professor Rhonda Gorman is the costume designer, guest artist Dave Mckee will serve as the lighting designer, and student Crystal Phariss will be the stage manager with student Chelsea Taylor assisting her.  Students Kolby Campbell and Bronwynne Smith will focus on sound and properties design while student Carlos Iruegas will choreograph the fight scenes.

Tickets are $10 for adults and $5 for students and seniors. The Drama Program has a “pay what you can” timeframe on Saturday at the 2 p.m. production, but only if the ticket is purchased at the box office.

For more information or to purchase tickets visit http://www.twu.edu/drama.