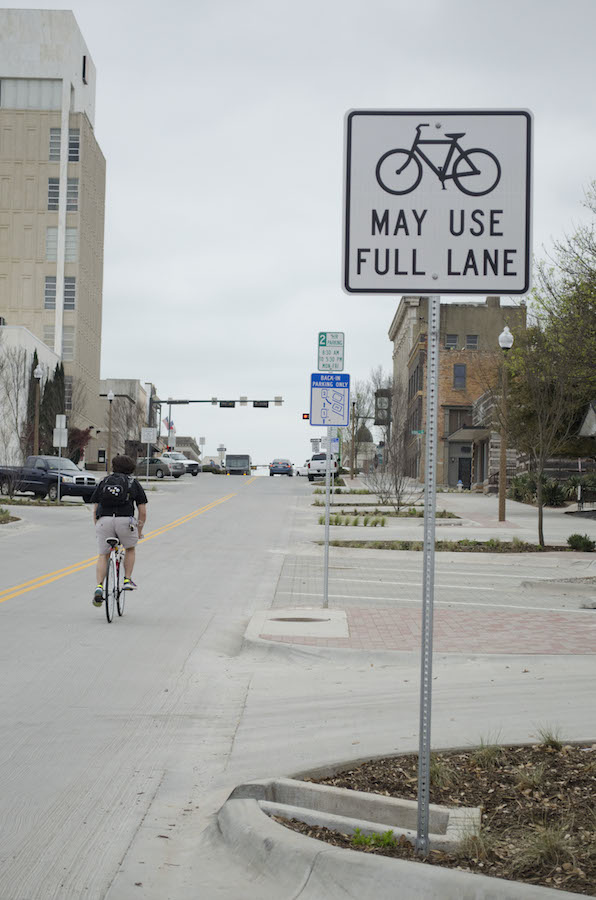 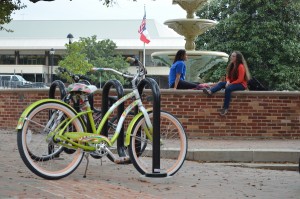 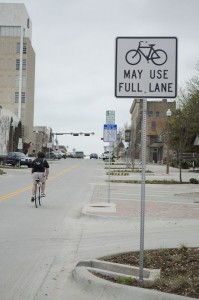 When I was a child, riding my bike was one of the coolest things in the world to me. It gave me a sense of freedom I had never experienced before, and speed I never achieved with my own two feet. The slender frame, pumping up the tires myself, all contributed to that first taste of freedom that comes with transportation.

But there’s a lot to learn when you take a bike to the road and leave your neighborhood. No matter if you are eight or eighteen, there are rules, both written and unsaid, that everyone needs to know.

“I’ve been riding for two and a half years,” junior Nutrition and Wellness major Shelly Reynolds said. “I used to live in Gainesville — when people rode their bikes it was kinda foreign. It didn’t feel safe in Gainesville, people would freak out. People in Denton are used to it, so I feel pretty comfortable.”

UNT Librarian Doug Campbell is an avid cyclist and is also an admin for Bike Denton, a news source for all things related to bicycles and riding in Denton County. Campbell recently put out the call for interest in a Denton Bicycle Coalition. The coalition is meant to be a unified voice for the bicyclists in Denton and would strive for a more bike friendly city.

Currently, there are only four bicycle coalitions in Texas, located in Austin, Houston, San Antonio and The Woodlands.

Some goals and actions of any future coalition may include educating citizens regarding bicycle safety, skills and maintenance, encouraging ridership, and collaborating with TWU and UNT for outreach and education during events.

Reynolds said: “I was too afraid to bike on the streets. You have to use your hand signals and make sure you have the proper gear. I was very nervous at the beginning, but it’s something you have to do and get used to doing.”

On good weather days, Reynolds bikes five miles from her home to school and back again. According to Reynolds, Bell can be pretty busy, so having a bike lane would be helpful.

In February 2012, the City of Denton began its plan to update pedestrian and bicycle linkage components. Elements of this plan are meant to improve accessability and safety for vulnerable road users. The city plans to incorporate bicycle facilities into new projects and collaborate with local enthusiasts to create an annual biking event.

TWU offers free bicycle registration at the Department of Public Safety on campus. This service is used to help prevent and recover stolen bicycles. TWU also has pump stations for airing up tires, one of which is located outside the Fitness and Recreation Center.

“People will come in [to the Fit and Rec] and ask how to use it,” Fitness and Recreation Center front desk supervisor Kayvon Haj said. “It happens every couple of months.”

TWU also provides students with access to a repair station outside of the Union. The station comes with a pump and includes tools such as common wrench sizes, Phillips and flathead screwdrivers, and tire levers, all tethered to the stand.

“When I started, I did a lot of research before riding. It was partly because my mom wanted me to, but I also felt I needed to know,” said Reynolds.

According to ordinance No. 2011-046, a cyclist is considered a vulnerable road user, and in Denton is awarded the same protection as a pedestrian. With this, drivers must give a berth of three feet or more to vulnerable users if there is no bike lane.

For new cyclists, keep safety in mind. Make sure you are always visible and are wearing reflectors and brightly colored clothing. If you don’t know your hand signs, learn them. These will be important to communicate with other road users on stops, merges and turns.

Texas is one of the states that does not have many specific laws regarding cyclists, but instead municipalities made decisions for bicycle laws. Texas does not have any statutes that specifically address sidewalk riding or helmet laws. However, it is important to check city ordinances for specifics.

For more information on bicycling in Denton, visit http://www.cityofdenton.com or check out http://www.bikedenton.wordrpess.com.

Published in Features, In print and LATEST