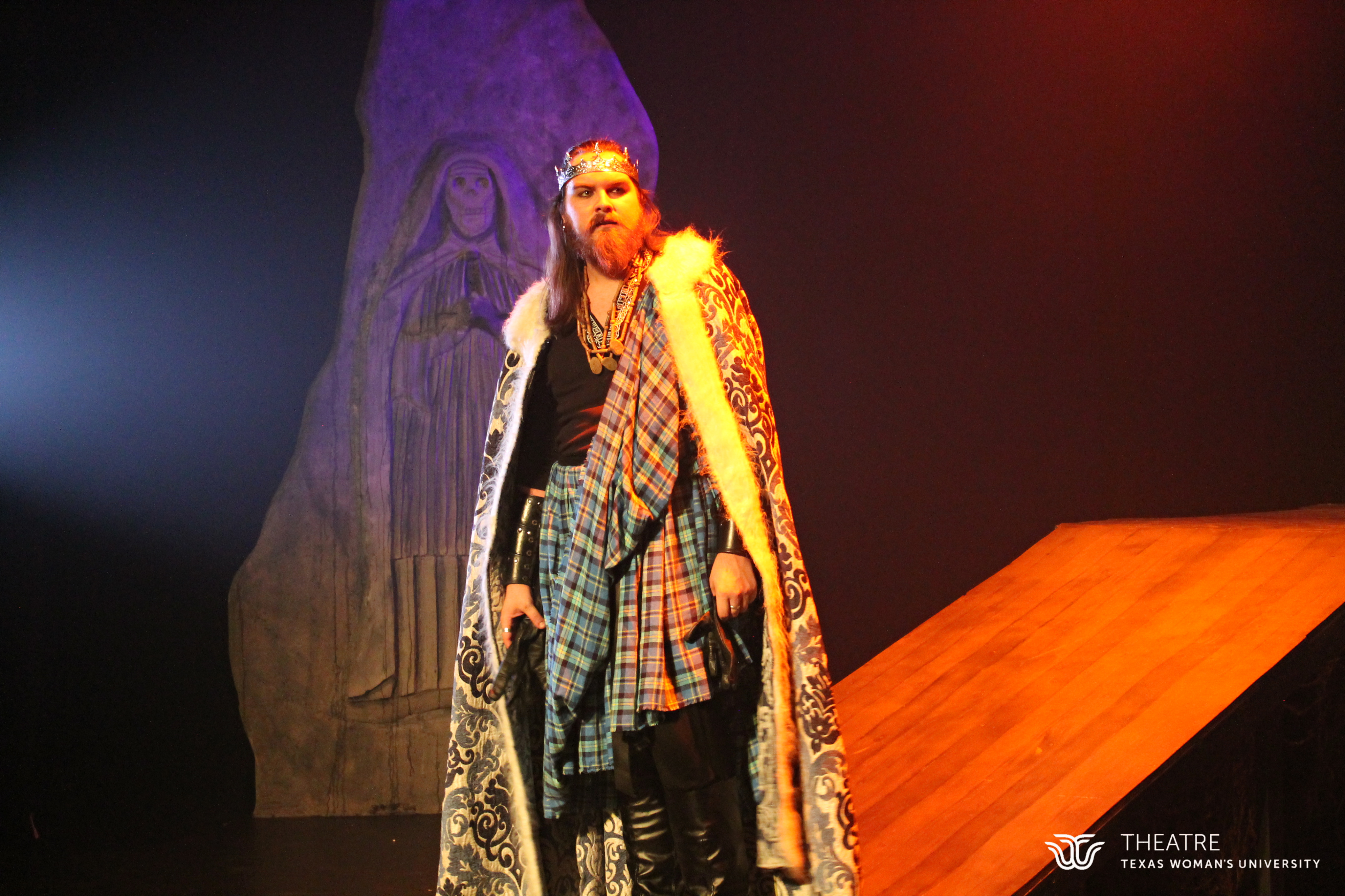 For theater buffs at Texas Woman’s University, something wicked this way comes.

The 2019-2020 season at TWU’s Redbud Theatre opened with Shakespeare’s “Macbeth,” which runs Oct. 16 through Oct. 20. Directed by associate professor Steven Young, “Macbeth” is a time-old tale of the danger of unbridled ambition. When warrior Macbeth receives a prophecy naming him the next king of Scotland, he – with the encouragement of his wife – enacts murderous plans that dangerously alter the lives of those around him and the country he calls home, ultimately driving him to madness.

Opening Wednesday evening, the play’s cast performed for a sold-out audience, delivering a solid run-through of the Bard’s classic tale.

In casting, the show leaves little to be desired. Senior theater major Walker Delk brings an unparalleled passion to the lead role, creating a formidable figure of the manic Macbeth. Delk captures the many faces of the Scottish king slayer, who flits from murderous rage (during Fleance’s escape) to cowering fear (at Macduff’s approaching army) to a constant state of paranoia.

Fellow theater senior Lauren Jordan shines as Lady Macbeth, bringing a commanding presence to the part. The chemistry between the characters is palpable, conveying the kind of intensity that drives murder and the acting talent that finds Delk and Jordan in lead roles again and again.

Though in smaller roles, junior theater major Camden Riefler demonstrates a promising confidence as Malcolm, the next king of England, and theater junior Abel Matthew brings a sly joviality to the role of noble Banquo.

True to the budget of a college theater with a shrinking liberal arts program, costumes were not without hiccups, notably how oversized Delk’s crown was, frequently sliding down over his eyes during a pivotal battle scene. The oversight was only a mild distraction, though, much like the other opening-night hiccups – the failed lip-sync of the voice-over and Katherine Hogan’s mouthing during the second prophecy, the slight struggle to get the cover back on the raised stages’ trapdoor at the end of a scene.

But one walks away from the production not remembering the slight mishaps but the fervor of the performances, which are delivered with the gusto of a budding professional troupe.

Much like the impressive performances of the cast, the set, lighting and sound create an atmosphere reminiscent of the Elizabethan stage, blending modern effects with primitive props.

Like the mad king’s eventual defeat, the production is full of sound and fury, but somehow, meaningful. Young’s “Macbeth” reminds us why the centuries-old tale continues to resonate with audiences: because ambition and power are timeless and ever corrupting pursuits.

To purchase tickets or for information on upcoming plays, visit the TWU Theatre website.