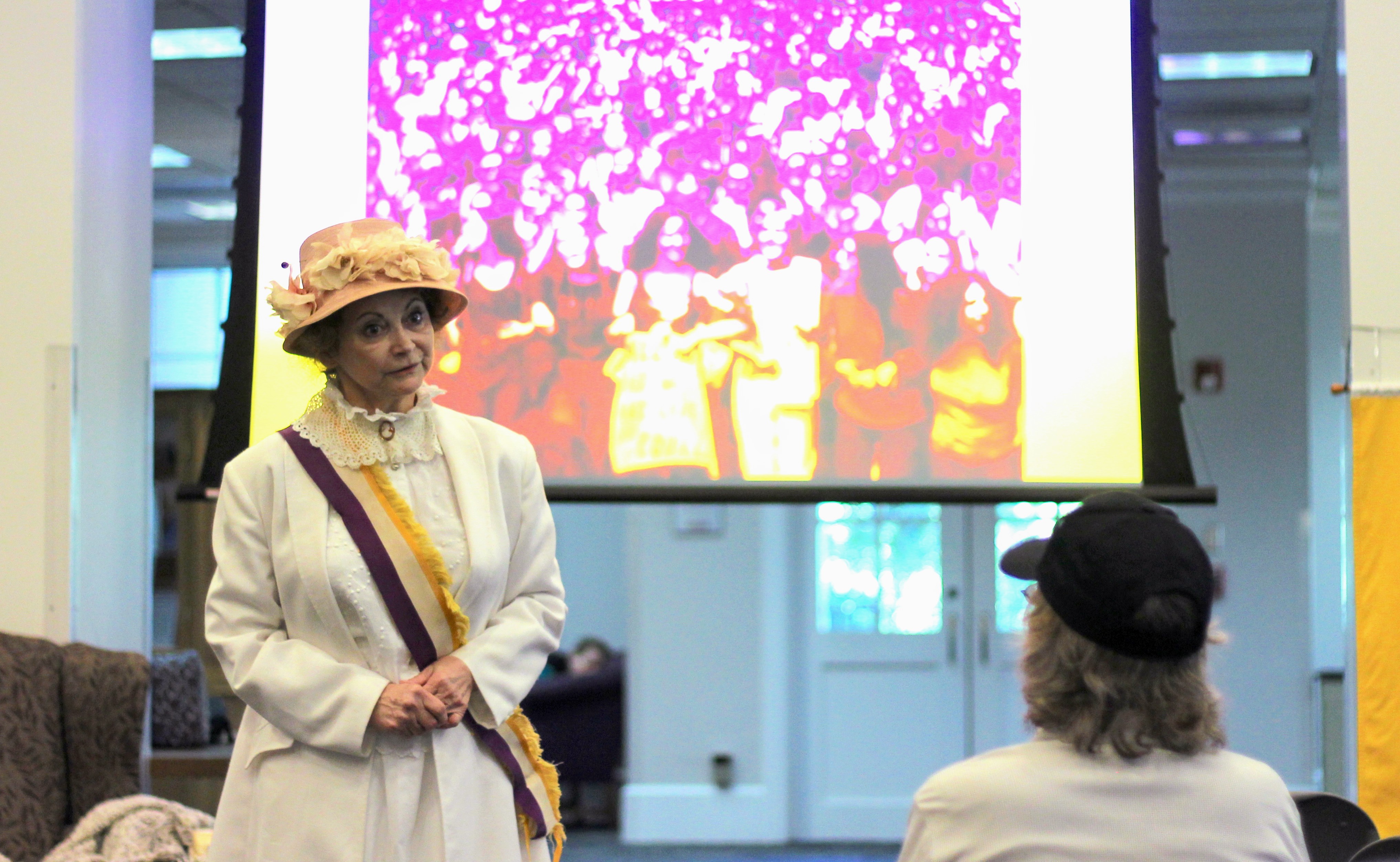 The library held events all day Tuesday to celebrate women and their part in our nation’s history. There were voter registration tables available, a showing of HBO’s movie about women’s suffrage, “Iron Jawed Angels,” and an Alice Paul reenactor. This event also held a panel featuring the Democratic and Republican Chairs for Denton county, Angie Cadena and Jayne Howell.

Dr. Jonathan Olsen, chair of the department of political science, said that the organizers wanted the focus of the event to be about reflecting on the challenges that happened during the suffrage movement.

“Women’s concerns have not been front and center,” Olsen said. “One-hundred years of women in politics, it’s not that long.”

The 19th amendment was passed by Congress in 1919 and was ratified on Aug. 18, 1920. It was an almost century-long fight, some of which was fought on our own campus. According to the TWU website, some buildings at the university are named in suffragettes’ honor, including Stoddard Hall, after Helen Stoddard, and the Mary Eleanor Brackenridge Student Union, after Mary Eleanor Brackenridge.

These women, along with Eliza “Birdie” Johnson, were part of the Texas Woman’s Suffrage Association and were prominent voices in the fight for women’s rights on our campus. Each of these suffragettes were regents for the university, back when it was named the College for Industrial Arts.

“All the women in the suffrage movement were so courageous,” Nancy Bocskor, the director of the center for Women in Politics & Public Policy said. “Many people take that right [to vote] for granted.”

Bocskor said this is one of the reasons why the organizers decided to have the Alice Paul reenactor come to their event.

“It puts a real face on the women’s suffrage movement,” Bocskor said. “I didn’t grow up learning the history of these women. History classes don’t consider what these women did.”

Alice Paul is a prominent historical figure in the fight for women’s equality. She fought for women’s rights at a national and international level, helping to get sex equality in the United Nations charter and the 19th amendment passed. Paul also authored the Equal Rights Amendment which states no rights can be withheld from any citizen on the basis of sex, but it did not get passed.

Paul was portrayed by Taylor Williams, an actress from the American Historical Theater and a litigation lawyer in Pennsylvania. Willams gave the audience a brief but detailed history of Paul’s efforts during the suffrage movement and a timeline of when significant moments in the movement were accomplished.

“My favorite part is when she talked about the hardships [Alice Paul] went through,” Candy Mesta, freshman nursing student, said. “It’s good to know what happened so that it never happens again and so we know that the fight wasn’t something that was easily done.”

Bocskor and Olsen said they hope that events like the Constitution Day celebration will encourage university students to get involved in politics.

In the previous Presidential election, Texas ranked 47th in voter turnout and 44th in voter registration, making the state one of the worst in the nation for citizen engagement, according to a study done by the University of Texas at Austin. Bocskor said that it’s important that university students are aware of this, and that it’s the people who didn’t vote that determined the outcome of that election.

“There are people around the world who die and are beaten for that right to vote,” Bocskor said. “Politics is not a spectator sport. If you want to change politics, you have to get involved.”