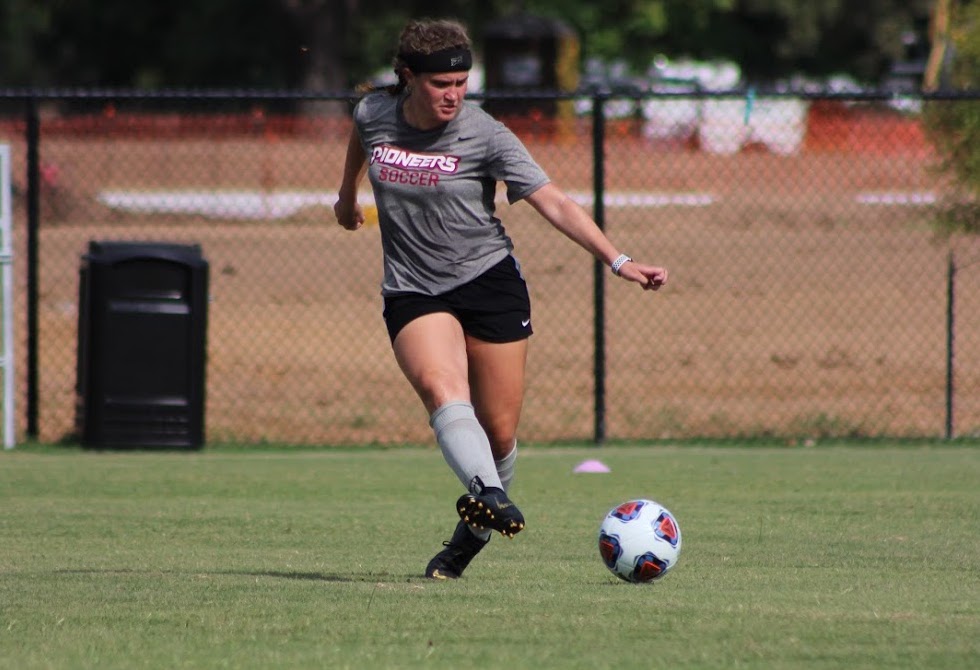 By Katelyn Cusimano on September 5, 2019

The newly-appointed student regent has been juggling soccer and regent responsibilities since August as she seeks to connect with and speak for the student body at all three campuses of Texas Woman’s University.

Lexi D’Abrosca, a junior kinesiology major, government minor and mid-fielder for the TWU soccer team, was selected by the governor of Texas to serve as this year’s student regent and says that she is excited to show athletes everywhere that they are more than just an athlete.

Along with D’Abrosca’s new mantra, however, comes the balancing act between all of her activities. She is also a member of the honors scholar program, the student-athlete advisory committee and the kinesiology club, in addition to her other responsibilities.

“Right now, I’m kind of dealing with the overlap of them [student regent and soccer],” D’Abrosca said. “For example, I have a regent meeting the same day I have a soccer game, in San Antonio. So, right now, it’s dealing with which one do I go to?”

D’Abrosca seeks to find the time for balance, but when there is not enough time in a day for both, she admits that she prioritizes her role as student regent.

“Student regent’s definitely a little more important because it’s a huge honor and privilege just to do it,” D’Abrosca said. “I was selected out of all three campuses, and I know how prestigious that is, so, of course, I’m going to prioritize student regent a little bit more. There’s only one of me, versus there’s 24 other teammates.”

So far, D’Abrosca has sat in on a board meeting with the board of regents, attended the grand opening of Mary’s Hall and given a speech at the first-year convocation without any interference with her soccer schedule. However, she knows that she will soon have to start making choices to miss soccer events for student regent obligations. D’Abrosca said her teammates have remained supportive of her decisions and maintained the same team dynamics despite knowing that there will be times that she has to miss out on games.

“They all think that it’s fantastic, which is great to have, so I know that none of them will be upset or hold it against me or anything like that,” D’Abrosca said. “Just having that great team chemistry and having supportive teammates has really helped.”

One of D’Abrosca’s teammates, Maddy Harper, a sophomore psychology major and defender on the TWU soccer team, echoed D’Abrosca’s confidence.

“The way she [Lexi] explained it, she was saying no athlete has been in this position before,” Harper said. “The fact that she’s so high up and able to put in those ideas that could come from someone like me – or anyone on our team – or even any athlete at Texas Woman’s is a really great thing.”

Harper also attests to the leadership that D’Abrosca brings to the soccer team.

“When I showed up on the team, I knew that she [Lexi] was already a person of importance,” Harper said. “She got a lot of playing time, and she was already out there leading the team, you know, being really vocal and in soccer, that’s a huge thing if you can be out there on the field and dictate or direct where everyone’s going.”

According to Harper, this trait is what makes D’Abrosca such a great fit for the role as student regent.

As a classmate and friend of D’Abrosca, dental hygiene junior Blair Baumann also speaks highly of D’Abrosca’s leadership and passion in the classroom and in her extracurricular activities on and off the field.

Taking on the role has only changed D’Abrosca for the better, according to Baumann.

“I think the biggest change I’ve seen in her [Lexi] is that she’s just so excited for the future of the university,” Baumann said. “I see this newfound pride in her for the school, which was always there, but she’s excited to see the development of our future plans and our future buildings and she’s excited about attending these ceremonies and meeting these people and to get to know our university so she can better represent it.”

D’Abrosca affirms that she not only is excited for the future of the university but is also excited to serve as the liaison between the decision-makers of the university and the students by learning and voicing the opinions students have.

The TWU soccer team will have their first game of the season at home against East Central Sunday, Sept. 8 at 7 p.m. To see D’Abrosca and the team in action, catch her playing at that game, or she will be at a table that she says will soon be set up at the Student Union for students to come to and voice any opinions or concerns they may have about the university.

Featured image: Lexi D’Abrosca kicks a ball to her teammates during soccer practice at The Texas Woman’s University soccer field in Denton, Texas on Wednesday, August 28, 2019. Photo by Sarah Pham.

Published in Athletics, Campus and Features