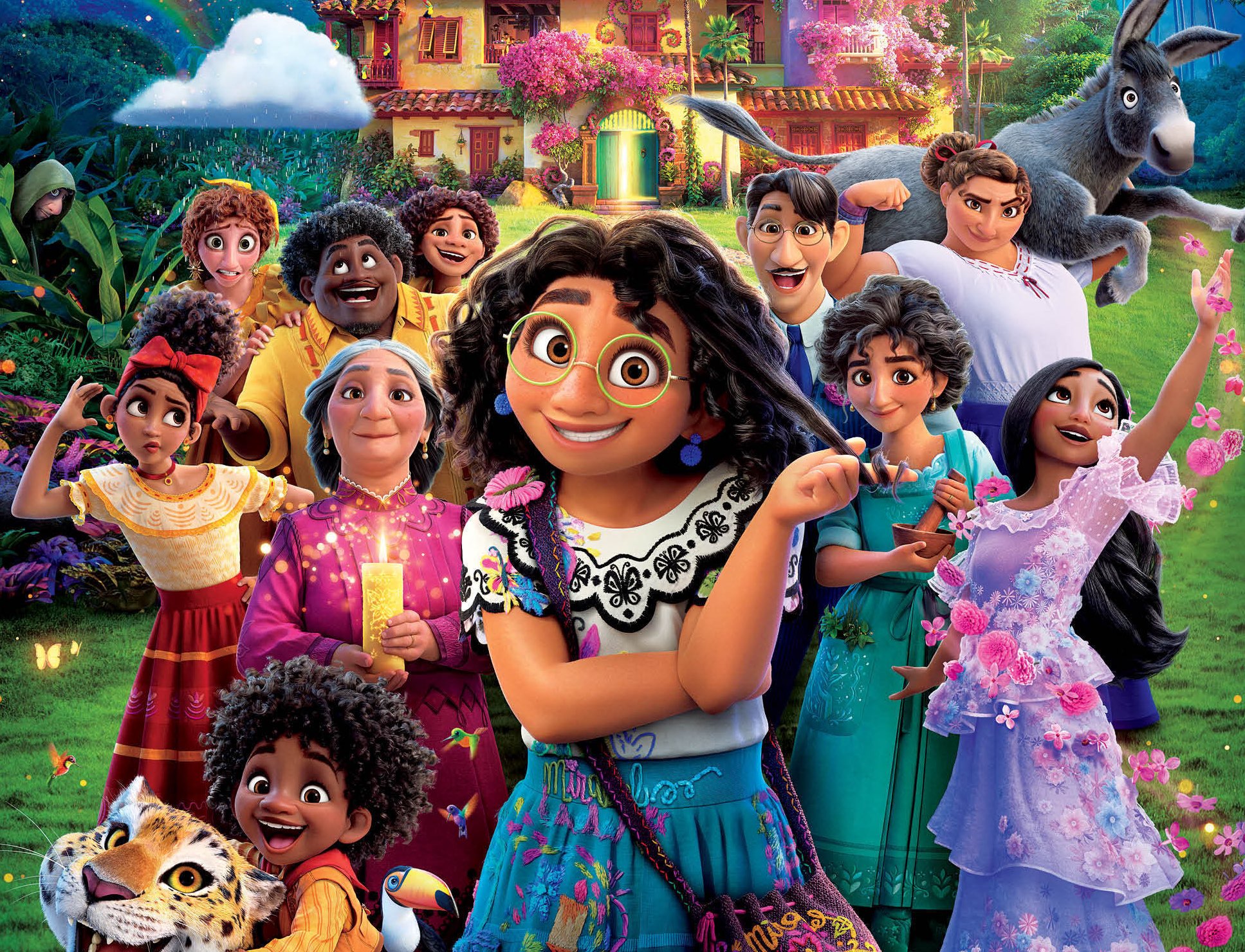 Disney’s “Encanto,” the media giant’s latest outing in the landscape of children’s films co-directed by “Zootopia’s” Byron Howard and Jared Bush, has been received well by kids and adults alike, receiving accolades left and right in the past couple of months.

The film covers the family Madrigal, a multi-generational dynasty endowed with magical abilities such as unnatural strength and shapeshifting, and its sole ability-lacking member, Mirabel Madrigal, as she attempts to solve the recent mystery of the family’s failing magic.

The stripped-down scope is a more recent approach for Disney’s projects, an interesting direction that risks feeling half-baked, and with the story’s weighty subject matter the new approach had the potential to be mishandled and reductionist. However, a combination of competent screenwriting, well-casted voice actors, and mind-blowing visuals made for a suitable introduction to heavy topics and mature storytelling within a fun animated film of mostly high quality.

Evident from the get-go is the amount of effort and care put into the film’s visual aspects, as the viewer is introduced to the beautiful quaint town that the Madrigal’s made themselves the magical guardians of, with a vibrant color palette unmatched by its contending animated films and even previous Disney works.

The design was handled deftly by the animators, details such as visible strands of hair inspires awe and the varying skin tones discourage any accusations of white washing within the film’s character design. What is more impressive than the visuals is the unprecedented execution of the film’s narrative, which sticks to one location the entire film and does something that is uncommon in kid’s films: the villain is not an individual, but an abstract concept.

The film does an excellent job of using Bruno’s character as a scapegoat for both the family Madrigal and the narrative for the first half of the film before his character is fleshed-out into a misunderstood, neurotic man whose power of seeing prophecies has made him an outcast of his own family.

Bruno’s power illustrates the true force behind the Madrigal’s disintegrating magic, which is the underlying insecurities that each family member suffers from as an extension of the abilities such as Luisa’s inability to shake off the pressure of being the dependable family member, Isabella’s desire to be perfect in the eyes of her grandmother, and Abuela’s pressure to keep the family’s magic manifesting as unsustainable expectations. The relatability of the antagonistic force of meeting certain expectations makes the tragedy of Madrigal’s fracturing family a deeply compelling tale.

The film does suffer from a few issues though, such as how the narrative can only be taken so far when it comes to making the film suitable for children. The film has a wide ensemble cast and aside from some of the bigger players such as Mirabel and Bruno there are several who suffer from the constraints of the film format, serving as either cardboard caricatures or wasted potential. The same could be said about a few songs off the soundtrack, such as the unremarkable “Waiting on a Miracle” and Isabella’s ballad “What Else Can I Do?”

However, there is a reason that the film’s soundtrack has been making the rounds on social media lately. The beautiful and moving “Dos Oruguitas” is a wonderfully sung Spanish duet that incorporates the culture that surrounds and inhabits the film’s narrative and setting.

Similarly, the Luisa-driven track “Surface Pressure” elevates past the average vocals of the verses with the singing during its chorus and the personal subject matter of inadequacy and the fear of burnout.

The crowning jewel of the soundtrack must be the ensemble musical number of the film, “We Don’t Talk About Bruno,” a song so evidently written by Lin-Manuel Miranda through its excessive use of various melodies that eventually congeal together, creating a storm of sound that genuinely works as the catchiest tune in the film.

Overall, the people behind this Disney product must be applauded for their execution of such a whimsical yet personal film, not simply for doing so much more right than they did poorly, but because there was such high potential for the narrative to go awry.

The diversity exhibited throughout the film is also a welcome change from tradition, trading the usual consistently light skin tones for a respectable amount of variation. Though the film is not keen to delve deeper into its subject matter than it must, it is a promising step towards Disney moving past a formula that grows more antiquated as the art of animated film continues to evolve and into more intriguing storytelling that maintains great family fun simultaneously.

Jesus Reynaldo Valdes can be reached via email at jherreravaldes@twu.edu.