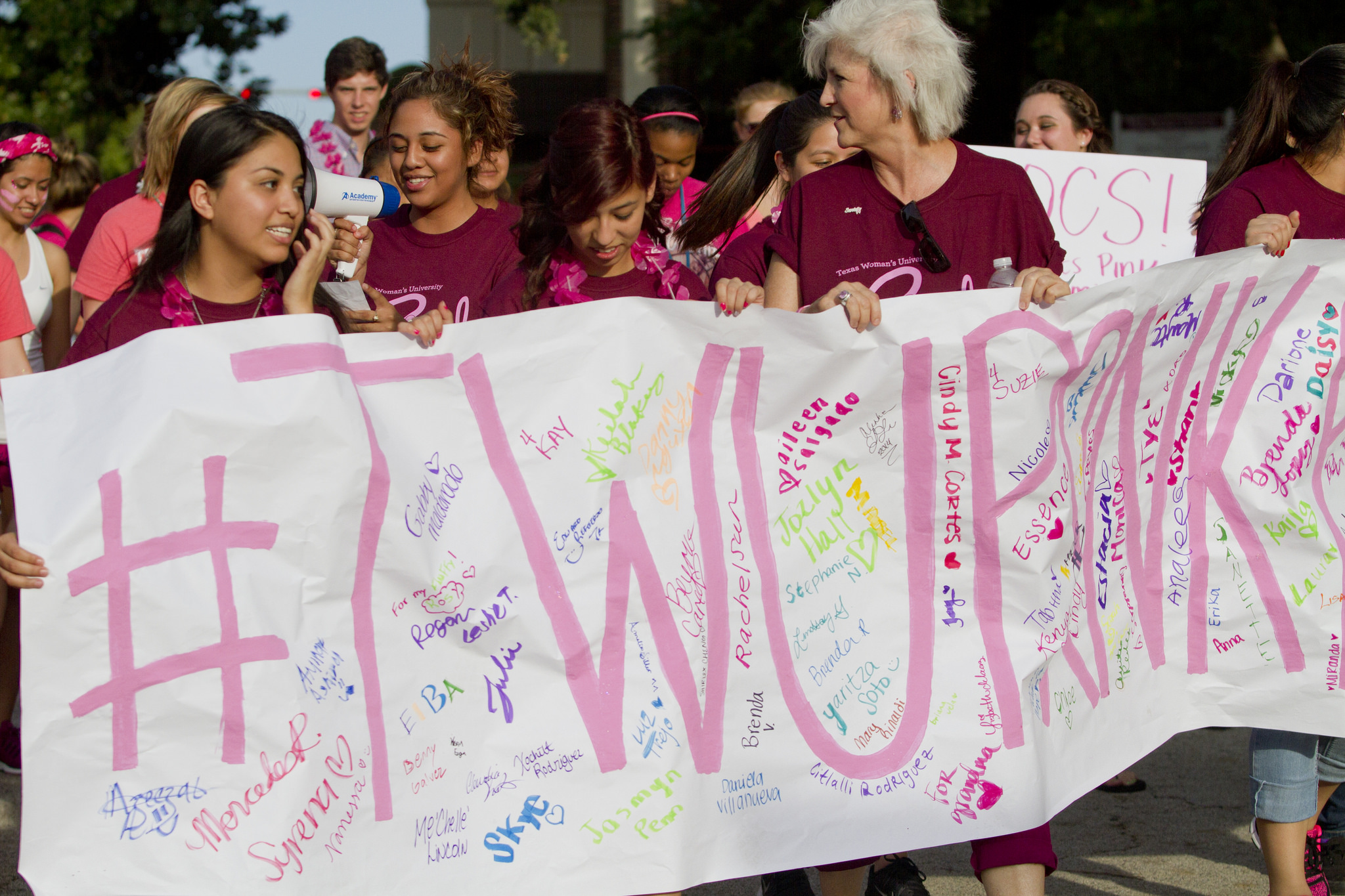 *Originally printed in the October 8, 2014 issue of The Lasso*

October is the National Breast Cancer Awareness Month. To encourage thoughtful consideration about the female student health on campus, Assistant Director of Health Promotion Sonia Redwine and members of the Greek organization Sigma Lambda Gamma have worked together to plan Pink Promises, a walk in honor of breast cancer survivors and a call to awareness about this prevalent issue.

Last night, at 5:30 p.m., students met at the steps of Hubbard Hall to prepare for the annual Pink Promises walk for breast cancer. It was open to the TWU community and free to those who attended. Students were drawn in last minute as they saw groups decked in shades of pink gathered together. T-shirts and bright pink leis commemorating the event were handed out as students started arriving until supplies ran out. Students signed a banner to carry for the walk covered in student’s names and breast cancer sufferers/survivors.

Vice President of Program Development for Sigma Lambda Gamma sorority Juana Ojeda helped to plan for the event on behalf of the organization’s philanthropy. She contacted Redwine starting in July to plan for the event. She shared: “I’ve never been so passionate about breast cancer. Compared to last year, I feel more passionate and I have more knowledge about it. I just want to continue to spread awareness to everyone, and maybe with the sorority, next year do something bigger.”

According to Breastcancer.org, one in eight women in the U.S. will develop invasive breast cancer. For TWU, which has a predominantly women student population, this means that of the 13,500 or more female students attending the university about 2,000 of those women will develop breast cancer. This makes breast cancer awareness especially important to student health here.

Dr. Tina Mims, a visiting lecturer for the TWU School of Management has overcome her own battle with breast cancer. Mims’ experience is a powerful testimony and an example of how one should potentially handle such a life changing diagnoses.

In a phone call interview before the walk, Dr. Mims shared some of the lessons she learned through her experience. Mims found out she had breast cancer in 2012 after receiving the results from a biopsy on a suspicious lump. She had put off her health maintenance for two year due to caring for her ill father who past six months before. Dr. Mims shared that the period was very stressful for her and her body was undergoing changes that probably contributed to her developing the hormones that would attack her body.

There are several different factors that can contribute to developing the cancer and can just as easily be unrelated to genetics as it actually is. This emphasizes the importance of maintaining and monitoring your health if you are a women. Mims recommends that even if a mammogram registers a lump on your breast, but the doctors do not believe it is cancerous, get it checked if it is unusual or uncomfortable for you. Mims states: “We are advocates for our own health.” It is hard for doctors to determine what is normal or typical for each patient that comes through. Mims says that everything is important, patients should be able to share the slightest of things.

With all the information that women may be sharing with more than one doctor, Mims says you should treat them as if they were on a team, much like a business model. The best advice she could give to young women about maintaining their health as a patient is to be actively involved in the decisions that doctors are making on your behalf. She explains: “You are the hiring manager, they report to us, it’s a collaborative team effort.”