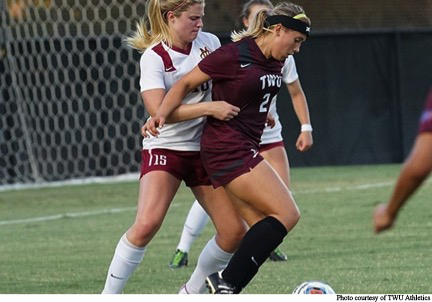 On Tuesday Oct. 27, the Pioneer volleyball team faced off against the DBU Patriots and came away with a win. The game set the Pioneers’ season record at 19-5.

The Patriots put up a solid effort throughout the match. In each set, both teams struggled to take and maintain the lead. The Pioneers won all three sets, though, with scores of 25-23, 25-17 and 19-5.

Pioneer head coach Shelly Barberee said in a TWU press release: “We played really well and it was a fun game to watch. DBU hasn’t lost at home prior to this game and we picked up a good regional win. I am very happy with our performance today after struggling in the two wins this past weekend.”

On Friday Oct. 30, the Pioneer volleyball team met with victory again as they played against the Texas A&M-Kingsville Javelinas. The win gave the Pioneers a season record of 20-5.

The Pioneers took charge in the first set and scored 25-9 against the Javelinas. The Javelinas put up a fight in the second and third sets, but the Pioneers ultimately won both sets with 25-21 and 25-20, respectively.

In a TWU press release, Barberee shared: “We played really well and picked up a huge road win because they are right behind us in the standings. We came in here with a game plan and stuck to it. We served really well and recorded 10 team blocks. I am proud of the girls.”

The Pioneers’ next game will take place Tuesday Nov. 3 at 7 p.m. at the Kitty Magee Arena.

On Halloween, the Pioneer soccer team put up an effort but ultimately came up short against the Angelo State Rambelles, with a 1-0 score overall to set the Pioneers’ season record at 9-6-2 and their Lone Star Conference record at 4-4-1.

The Rambelles scored their only goal within the first three minutes of the game. The Pioneers attempted numerous shots on their opponent’s goal, but none found the net. However, they were able to stop additional attempts the Rambelles made.

Pioneer head coach Babak Abouzar said in a TWU press release: “We played really well against one of the best teams in country. We made one mistake and they capitalized. Angelo State hasn’t lost at home in couple of years and we were so close in getting at least a result. We have one game left in the regular season and we need to finish strong.”

This past Sunday, the Pioneer soccer team squared off against the Midwestern State Mustangs and came away with an overtime win, scoring 2-1 and setting the Pioneers’ season record at 10-6-2 and their LSC record at 5-4-1.

Both teams battled fiercely for the lead in the first half, but neither was able to score. The second half saw the Pioneers’ senior forward Natalia Diaz scoring on the Mustangs’ goal. The Mustangs soon tied the score, and the game went into overtime. TWU won when sophomore midfielder Megan Coppedge scored off of a free kick.

In a TWU press release, Abouzar stated: “I am proud of the girls. It’s a great accomplishment and their hard work and dedication this season paid off.”

He added: “We were both fighting for the third spot in the standings. Natalia put us on top with a great goal off a corner kick, but Midwestern State sent more people up front and tied the game. We regrouped in the overtime and executed on a free kick. Megan had a good shot at the PK mark and she ended the game.”

The soccer team will go on to participate in the LSC on Thursday Nov. 5, Friday Nov. 6 and Sunday Nov. 8.

Published in Athletics and LATEST