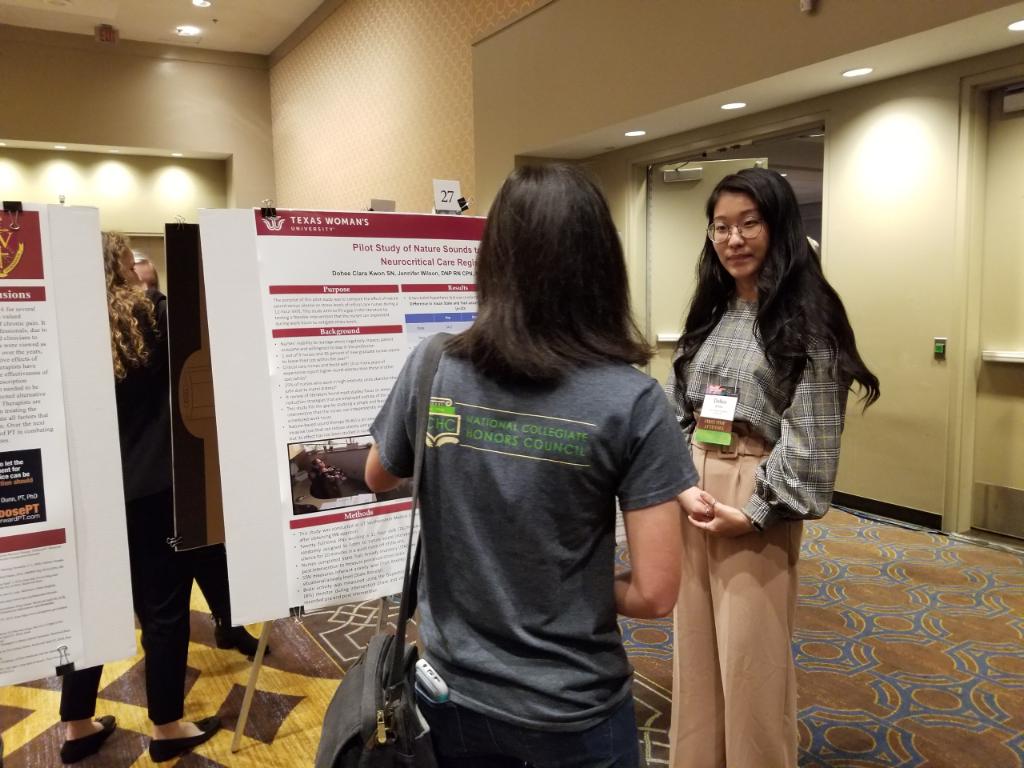 As the group of honors students wait in the hotel lounge for the bus to take them to the airport, Clara Kwon decides to check her email. She’s had to miss a couple of days of school for the conference, and she wants to make sure she didn’t miss any emails from any of her professors. Unexpectedly, the first email she sees in her inbox is from one of the National Collegiate Honors Council presentation coordinators.

Kwon, a nursing junior major at the Dallas campus, won second place in the Health Science Research category at the NCHC poster session in New Orleans early this month.

“I didn’t expect it at all,” Kwon said. “There were so many crazy research studies there that I was just looking at the titles and was like ‘Wow, this is very impressive for an undergrad.’“

As an honors student, Kwon has to complete a capstone project before she graduates. To help her come up with an idea for her capstone project, Kwon applied to the Engaged Nursing Students Partnering in the Research Experience (ENSPIRE) internship and became a student research intern at the Neuroscience Nursing Research Center at the UT Southwestern Medical Center.

When she started her internship, Kwon said there was a nurse doing research on the impact of music on the stress level of patients. Kwon was inspired by the project and wanted to see if music could be used to reduce the stress levels of nurses.

“Nurses are leaving the profession at an alarming rate, and I wanted to see if there is something we can do while they’re working their 12-hour shift that can help alleviate some stress and anxiety that goes behind the high turnover rate,” Kwon said.

Kwon worked her mentor at UT Southwestern to make the project more achievable and something that could be completed in a year of allotted time. For the project, Kwon recruited 20 critical care nurses and sent them to a quiet room where they were randomly assigned to listen to nature sounds or silence for 20 minutes.

Kwon measured the nurses’ perceived level of anxiety and their brain activity while they were in the room. She found that the nurses who listened to nature sounds had lower brain activity, but they didn’t perceive themselves to be less stressed.

“It wasn’t what we expected to find, but it opened up a lot of discussions, especially while I was doing my poster presentation about where the study can go next,” Kwon said. “It opened up a lot of conversations and gave us a lot of questions that I think future nursing honor students who come through this internship could elaborate on.”

Dr.Jennifer Wilson, Kwon’s capstone adviser, suggested Kwon consider presenting her research at the NCHC conference. Kwon submitted an abstract of her project and got accepted.

“Her result were promising, providing support to continue this topic,” Dr. Wilson said. “It’s exciting to think about all the different directions this topic can go in the future.”

Kwon said people at the conference gave her a new perspective that she didn’t think of and helped her contemplate possible directions for the study. She hopes to use the newfound insight to build off the research.

“When I first started the internship, I was petrified and had no idea what research was especially in the field of nursing,” Kwon said. “But now it has become something I am passionate about and want to do.”