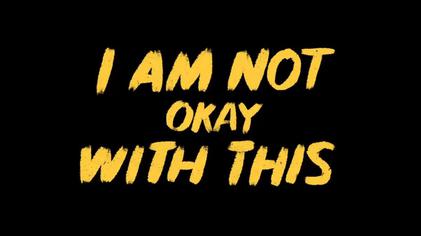 Being a teenager, for lack of a better word, sucks. Acne, bullies, drama, romance, family life, and ever-growing responsibilities are just some of the battles teenagers have to face every day. The last thing an emotionally unstable, stressed-out 17-year-old needs is to find out they have superpowers.

“I Am Not Ok with This,” a Netflix original series, follows Sydney Novak (Sophia Lillis) through her utterly bizarre and detailed diary entries. We see Sydney’s everyday life as she struggles with family trauma, her sexuality and the fact that, whenever she has an extremely negative emotion, she subconsciously makes things levitate. Despite this rare and uncommon gift, Sydney is never portrayed as anything but a regular teenage girl with flaws and struggles just like everyone else.

This realistic portrayal of high school life affects the characters closest to Sydney. Dina (Sofia Bryant), her best friend, and Stanley (Wyatt Oleff), her partner-in-crime, are shown engaging in rebellious behaviors and making typical mistakes. This down-to-earth tone is carried throughout the entire first season, making the experience even more relatable and hilarious to keep up with.

The production itself has some major pluses that keep the story flowing smoothly without taking away from the action. Both the cinematography and the soundtrack strikes a perfect balance between suspenseful thriller and teenage rom-com. This paired with believable acting from Oleff and Lillis keeps the storyline intriguing and the viewer emotionally invested until the very end.

Although it has a realistic story and numerous positive elements, “I Am Not Ok with This” also has some harrowing let-downs. The dialogue itself airs on the side of cheesy and stale which, paired with the slow-moving storyline, makes it seem as if the details were thrown together last-minute.

Despite its weaknesses, though, “I Am Not Ok with This” manages to tell the extraordinary tale of an average teenage girl without romanticizing the high school experience or minimizing the growing pains that come with adolescence.

Catty Tomaszewski can be reached via email at ctomaszewski@twu.edu