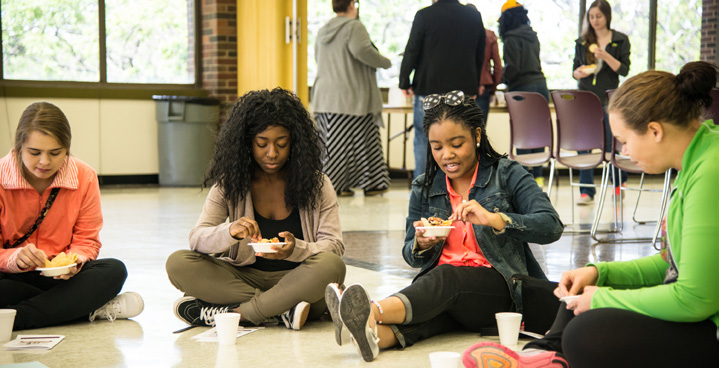 Imagine walking into a room occupied by three distinct groups of people. Those in Tier 1 are comfortably seated at tables garnished with tablecloths, silverware and cloth napkins, and on each of their plates is a substantial, protein-rich meal. The people of Tier 2 eat sandwiches while standing around a table, absent of chairs and napkins. Those in Tier 3 sit on the ground, eating chips and salsa with their hands.

Upon entering this room, a number randomly assigned to you determines which tier you will join. Where would you hope to end up?

This scenario is precisely what participants in the Hunger Banquet experienced on Wed., April 5. Rhetoric PhD Candidate Erika Johnson facilitated the Hunger Banquet in conjunction with the Quality Enhancement Plan Scholarship Program.

Matteson defined food insecurity as not having enough food, not having healthy food, or not knowing where one’s next meal will come from. Reportedly, 69 percent of U.S. college students are food insecure.

Johnson explains the connection between food insecurity and the random assignment of tiers: “Oftentimes it’s not anyone’s fault that you’re food insecure. It can be a situation of circumstance. When you’re born into poverty, it is an uphill battle,” said Johnson. “I found that a lot of students don’t know what questions to ask to get help, and they don’t even know who to ask.”

Matteson added, “My goals were to show students that there is a problem on campus, that’s its not normal to be a starving college student, and that they do have the power to change it. When you think of starving students, you think it’s their fault and that they spent too much money on junk food or beer or something not important… That’s not really the case. Students are making decisions between textbooks and food, or housing and food.”