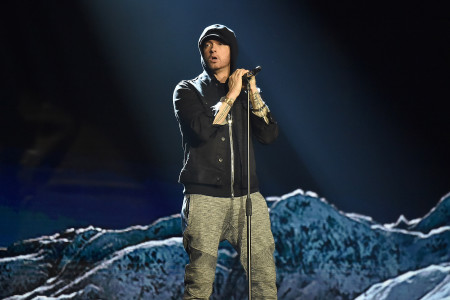 As someone who doesn’t listen to Eminem, nor has ever had any deep, fiery desire to do so, I can truly say that I still do not have any interest in his particular craft after listening to his new album “Music To Be Murdered By.”

I can’t wholeheartedly say that the album was not good, but I also cannot confidently admit that it was a well-rounded piece of work. Though I’ve never listened to any previous Eminem albums and my perspective might be a little more skewed or obtuse than the typical listener of the artist, the album just doesn’t deliver anything fresh or interesting. It happens to, unfortunately, miss a lot of the targets it aims for, which is slightly disappointing considering it is the work of such a well-known veteran artist that is often praised for consistent delivery.

The biggest issue with this album is that Eminem managed to make his intentions clear, but his feeble and, at times, cringy execution nearly ruins the whole vision. The particular song that comes to mind is “Stepdad”— a number that tells about Eminem’s childhood experiences involving his abusive stepdad and how he wished he could have gotten rid of him. The story it tells is undoubtedly heart-wrenching to hear but is also hard to listen to with Eminem chanting “I hate my stepdad” in an odd and elementary rhythm at every minute.

In no way do I mean to sound insensitive or invalidate the rapper’s grim childhood, but I do believe that there could’ve been a better way to musically express the narrative. Conveying emotion is something I know Eminem is often praised for and that he can do well like in his song “Kim” where he raps about his on-and-off partner Kimberly Anne Scott and the frustration he’s manifested after another failed attempt at a relationship with her. The song is blatantly brutal yet so emotionally raw and though it’s quite an alarming track, it’s performed and executed so well.

Having a song like “Kim” under his belt really shows what he can do when it comes to expressing his hurt and disdain, so it was a little disappointing not hearing him do as well with that kind of topic this time around.

It was this and the number of outdated beats and backtracks used throughout the collection that did prove itself quite off-putting. In an age of head-bopping baselines and perfectly-timed synths, such music productions have become the in-thing and what people want to hear. Listening to an album that lacks that particular kind of flavor makes the whole project fall a little flat.

However, despite these negatives, there are some meaningful positives that Eminem did manage to deliver with the album. “Music To Be Murdered By”’s eighth track, “Darkness,” recounts the 2017 Las Vegas shooting in the perspective of the perpetrator and dives into the recently emplaced fear among artists and concert goers of live performances as they have more often been the sites of mass shootings. In the music video for “Darkness,” the end screen shows, “WHEN WILL THIS END? WHEN ENOUGH PEOPLE CARE.,” and encourages viewers to register to vote in order to help change gun laws in America.

Seeing someone as big and influential as Eminem use his platform to bring attention and awareness to how serious the issue of gun violence is, is a facet that could very well reach and inspire many people. Going even further to remind the audience to partake in the upcoming elections shows that he truly cares for the wellbeing of the country and is invested in the importance of politics. The song gives a genuine show of character and also serves as the album’s inspiring saving grace.

Overall, “Music To Be Murdered By” is not one that’s easy on the ears. Aside from the quite powerful and significant gun violence PSA, the album is full of iffy lyrics and instrumentals that don’t catch very much of the listener’s attention. One can only hope that Eminem’s composition goes up from here, keeping in mind his known artistry and packed potential.