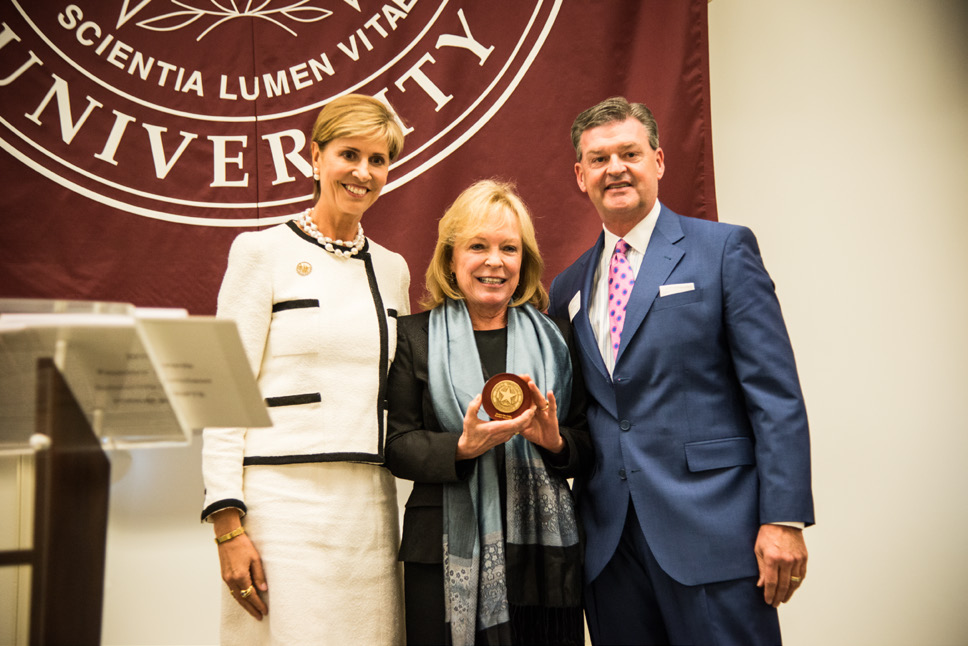 The Founders’ Award commemorates the university’s founding date of April 6, 1901 and celebrates community leaders who have gone above and beyond to support TWU. Recipients may fall into the category of individual/family, business/corporation or foundation/organization.

Griffin was honored for her contributions to education and for her leadership in Rotary International. As a faculty member in the Department of Reading and later as the Director of Teacher Education, Griffin made a substantial impact on TWU through her commitment to education.

“I wrote my own job description, and TWU was a match. I was allowed to climb,” said Griffin during the presentation of awards.

Griffin was also noted for being one of the very first women to join Rotary International. Her leadership in this organization has paved the way for countless women who share her commitment to improving their communities.

TWU Director of Legislative Affairs Kevin Cruser introduced Crownover as her 2008 to 2014 Chief of Staff. Crownover served in the Texas House of Representatives from 2000 to 2016.

Honored for her advocacy in public and higher education, Crownover has made a major impact on TWU and the greater Denton community. In 2015, she wrote the legislation increasing TWU and UNT funding by millions of dollars. She also played a substantial role in securing funding for infrastructure at both TWU and UNT.

This year, Crownover was also named “Advocate of the Year” by March of Dimes for her commitment to passing HB 790, a 2005 bill that protects Texas newborns by substantially extending the number of genetic disorder screenings they undergo.

Crownover took a moment to reflect upon opportunities afford by the Texas public higher education system and upon how these opportunities have shaped her and her family. “This is about opening doors for other people so that they can have those same opportunities…I’ve always described what [TWU does] as changing lives, one at a time,” she said upon receiving the award.