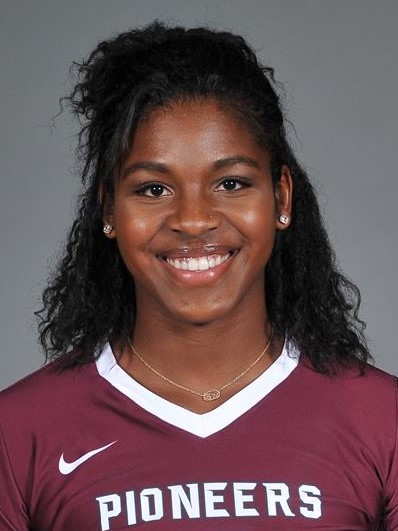 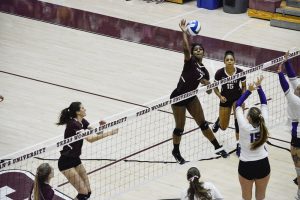 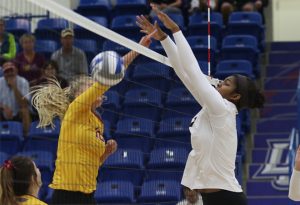 Experimentation quickly turned to greatness when Haley Collins decided to give volleyball a try. Growing up in a culture focused on athletics and academia, Collins discovered a passion for volleyball and science.

Award-winning and record-setting Senior middle blocker and outside hitter Haley Collins has grown as an athlete, scholar and individual since beginning her freshman year in the fall of 2015 at TWU. According to TWU Athletics Collins career highs consist of “125 kills, 433 attacks, 3 assists, 3 service aces, 41 digs, and 37 block assists.” Not only does Collins have an impressive athletic resume, she also has noteworthy academic achievements as well. According to TWU Athletics, Collins academic achievements consist of the “Lone Star Conference Commissioner’s Honor Roll (Fall and Spring) from 2014-2016, and the Division II Athletics Directors Association Academic Achievement Award in 2015.” Collins said what drew her to TWU was the open-mindedness of the campus and how “no form of knowledge feels forbidden here. The diversity component is excellent and there’s a culture of academic focus.” Collins has always been academically, as well as athletically, driven and said, “When choosing a school to play volleyball for, I didn’t feel ashamed of putting my degree first, and was encouraged to pursue opportunities that could benefit my future.”

One of Collins’ idols is American astrophysicist, Neil DeGrasse Tyson, who once said, “There is no greater education than one that is self driven.” Collins said she looks to Tyson for inspiration because of his contributions to scientific research. Collins shared, “He has shifted my perspective and inspired me to make informed, logical decisions throughout my college career.” Collins believes that studying anything is possible, including volleyball: “There are small intricacies of the game that can be perfected over time that turns teams into undefeated machines, and I think that’s amazing.”

Believing determination is the key to success, Collins knows preparation does not always guarantee the desired outcome. She noted that being an athlete has grown her patience, saying, “As an athlete, you don’t always get the results you predicted from how hard you’ve been working; that concept extends into a large facet of life, and has taught me to focus on the value of my work instead of the immediate result.” Collins also said she believes keeping a positive attitude when it comes to trial and error as an athlete helps her look at errors as opportunities for growth and chances to improve.

Collins said she is excited to be a senior because she can put her preparation and practice to work.

Collins stated that she believes in the culture she and her team are building: “We are establishing a culture of excellence here that is going to become a legacy, and there’s no other group of 12 on this planet that could do it like us.”

Published in Athletics, Features and In print