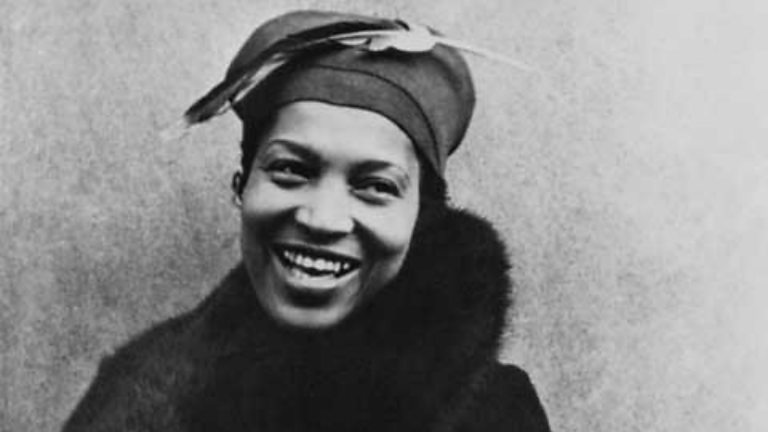 In 1925, then 34-year-old Zora Neale Hurston made the journey to New York City to attend Barnard College at Columbia University (her peers knew her to be 24). Arriving on the cusp of the Great Migration and at the height of the Harlem Renaissance, Hurston quickly found herself at the center of the movement, living and working alongside young black writers like Langston Hughes and Wallace Thurman.

But Hurston’s legacy as a folklorist has done little to reflect her time as a prominent creative in Harlem’s African American cultural movement. While many Harlem Renaissance writers’ works were rooted in the settings, culture and politics of the movement, most of Hurston’s short stories and novels were set in the rural south, particularly the idyllic Eatonville, Florida, of her childhood.

The publication of nine found stories from Hurston’s Harlem days, however, are bringing new revelations about her authorship to light. The collection, aptly titled “Hitting a Straight Lick with a Crooked Stick,” adds new depths to what some scholars have considered a one-dimensional legacy.

“As people have looked at the body of Huston’s known work and assessed the legacy of that work, they have tended to think of Hurston as a rural author because we had only one urban story, so it seemed like an anomaly,” Dr. Genevieve West, chair of the English, Speech and Foreign Language Department at Texas Woman’s University and editor of the new Hurston collection, said. “In fact, there are nine urban stories, which really changes the way you look at her body of work. Those nine stories really kind of rewrite the assertion that Hurston was ignoring the Great Migration – that she was kind of creating this idealized, rural world to counter the urban upheaval of the Great Migration.”

“Hitting a Straight Lick with a Crooked Stick” collects all of Hurston’s short stories from the Harlem Renaissance into one volume, including eight tales that were rediscovered in forgotten periodicals and archives. Through relationships and satire, Hurston explores race, class and gender in the heyday of Harlem culture.

The stories are organized chronologically, allowing readers to see how Hurston’s use of language evolved throughout the 13 years the stories span.

Everything about the collection is deliberate. West speaks of the importance of intention in editing and collecting the stories, describing how she and her research assistant, Allyson Hibdon, spent hours transcribing and collating, weighing the significance of every mark on the pages of Hurston’s earliest known printings of each story.

“We used the earliest printing of ‘John Redding Goes to Sea’ [but] there was a reprint of it where she did a little bit of tinkering, so there’s a slightly different version out there,” West said. “One of the lost stories that’s in the volume had been reprinted elsewhere, but we found passages of the text that were not included in the version that’s been printed. When these kinds of things happen, we don’t know – is it that they were working with a different version, so it was an incomplete version or was it an editorial mistake?

“Things just happen, and so there are some substantial differences between the stories as they appear and as they’ve appeared other places. The goal for me was just to get back to Hurston’s original intention.”

That dedication to the preservation of Hurston’s legacy is one reflective of West’s reverence for the author. For West, the project has been decades in the making.

As a graduate student at the University of Florida, West completed her dissertation on Hurston. West dreamed of publishing a collection of Hurston works that would impact her legacy, but feared she’d missed her chance.

“When I was a graduate student, and I started working on Hurston about 1993, and Hurston’s letters had never been collected,” West said. “Her stories had never been collected, her essays had not been collected, and so in graduate school, I’m thinking about dream projects, and I wanted to do the letters. At one point, I even published what we call a calendar of correspondence, and it was a list of all of Hurston’s letters, both the ones that came to her and the ones she sent, and where you could find them around the country.

“That was kind of my move toward that, and then Carla Kaplin came along and she did a beautiful volume, so I was like ‘OK, there’s that.’ Even in graduate school, Henry Louis Gates came out with ‘The Complete Stories,’ and I thought ‘Cross that off the list’ but now, I actually have gotten to do that. That was my dream project, and the stories are kind of my dream project.”

Talks with the Zora Neale Hurston Trust and publisher Amistad Press began in 2009, but West said “intensive work” on composing the collection began about 18 months ago. West received an arts and humanities grant through Texas Woman’s University, which provided her with a research assistant.

Though a longtime Hurston scholar, West found herself confronted with new revelations about Hurston’s authorship.

“I think a number of them [the stories] are really funny, and we get to see Hurston play with language in a way that we don’t necessarily see other places,” West said. “A lot of the stories that are recovered are written in the kind of mock-biblical form, so they have chapters and verses, and the language in them is this hilarious mix of high and low, biblical and secular. I knew Hurston knew her Bible [but] I didn’t quite understand how well Hurston knew her Bible, and so that’s really kind of been exciting and interesting for me.”

One facet of Hurston’s authorship the collection confirms is the subversive nature of her prose, tackling political issues with tongue-in-cheek rhetoric and biting wit.

“I think a lot of what she did, she had to do subversively, and that’s really the title of the book – making a way out of no way,” West said. “Finding a way to challenge norms and expectations but making you laugh while she does it, making you enjoy the process, making you care about the characters while she does it – those are the things that I think are really powerful.”

For West, it seems dreams of establishing herself as a renowned authority on Hurston will continue to come true. West is working with a collaborator to compile a collection of Hurston’s essays she hopes will emphasize the importance of the lost stories to Hurston’s legacy and, she says, “what a mistake it would be to dismiss them.”

For Hurston, too, new discoveries bring hope. Her work fell out of the limelight for several decades, in part because what critics saw as her politicized use of dialect.

From being celebrated as the critically acclaimed author of “Mules and Men” to the woman who died in obscurity and was buried in a then-unmarked grave, Hurston’s legacy contains multitudes that continue to evolve, her prose echoing from Harlem’s bluesy speakeasies to Eatonville’s sleepy marshes, bringing to life the voices of 20th century America.

Published in Features and Lifestyle