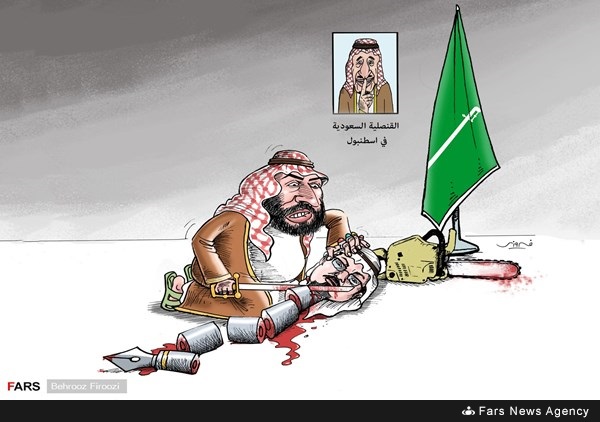 When the power of the pen results in murder

Words have power, and Saudi Arabia officials seem to recognize that since they killed journalist Jamal Khashoggi.

Yes, I know that is a bold statement to make, and a dangerous one if I lived anywhere but the United States, but I truly believe that Khashoggi’s death was not unplanned. Khashoggi was a well-known journalist who had exiled himself to America after a falling out with the Saudi royal family. He began writing columns and speaking about the faults in the Saudi Arabian government. There is yet to be an explanation about why he fell out of favor with the royal family, but something already seems fishy if he went from being pals with the people who ruled Saudia Arabia to forcing himself out of his country to talk about how bad the prince’s policies are.

Reportedly, Khasoggi entered the Saudi consulate in Istanbul to retrieve the necessary paperwork to marry his fiancé, who stood waiting on the curb outside the consulate for him. “Coincidentally,” 15 Saudi officials and agents arrived in Instabul by private jet that very same day. His fiancé was still there two hours later when black vans were seen leaving the premises. If you have seen any crime show ever, you know that black vans are never a good sign. The vans were reported to arrive at the home of a nearby Saudi consul.

Of course, there was instant suspicion that Saudi Arabia officials, including the prince, had masterminded this attack on Khashoggi, but BBC news states that “for more than two weeks Saudi Arabia consistently denied any knowledge of Khashoggi’s fate.” Prince Mohammed of Saudi Arabia claimed that Khashoggi left the consulate a few minutes after he first entered. Keep in mind that they are making these claims based on the security film from the consulate. Then, Oct. 20, a Saudi offical admitted that Khashoggi had died in a chokehold when he resisted attempts to bring him back to Saudi Arabia. Saudi officials apologized for his death, claiming that it was a “rogue operation” that was responsible for his murder.

However, evidence begs to differ. Turkey revealed audio and video footage of Khashoggi’s torture before his murder. While Saudi Arabia admitted it was a murder, it refuses to admit that its beloved Prince had anything to do with it. This claim seems rather unsupported when said prince said in a call to the White House that Khashoggi was a dangerous Islamist. Let me remind you that this is the same prince who Khashoggi severed a relationship with and then moved to an entirely different continent after their fall out. If you ask me, Khashoggi must know something about the royal family that they do not want to be leaked out, which left them with only one option-elimination.