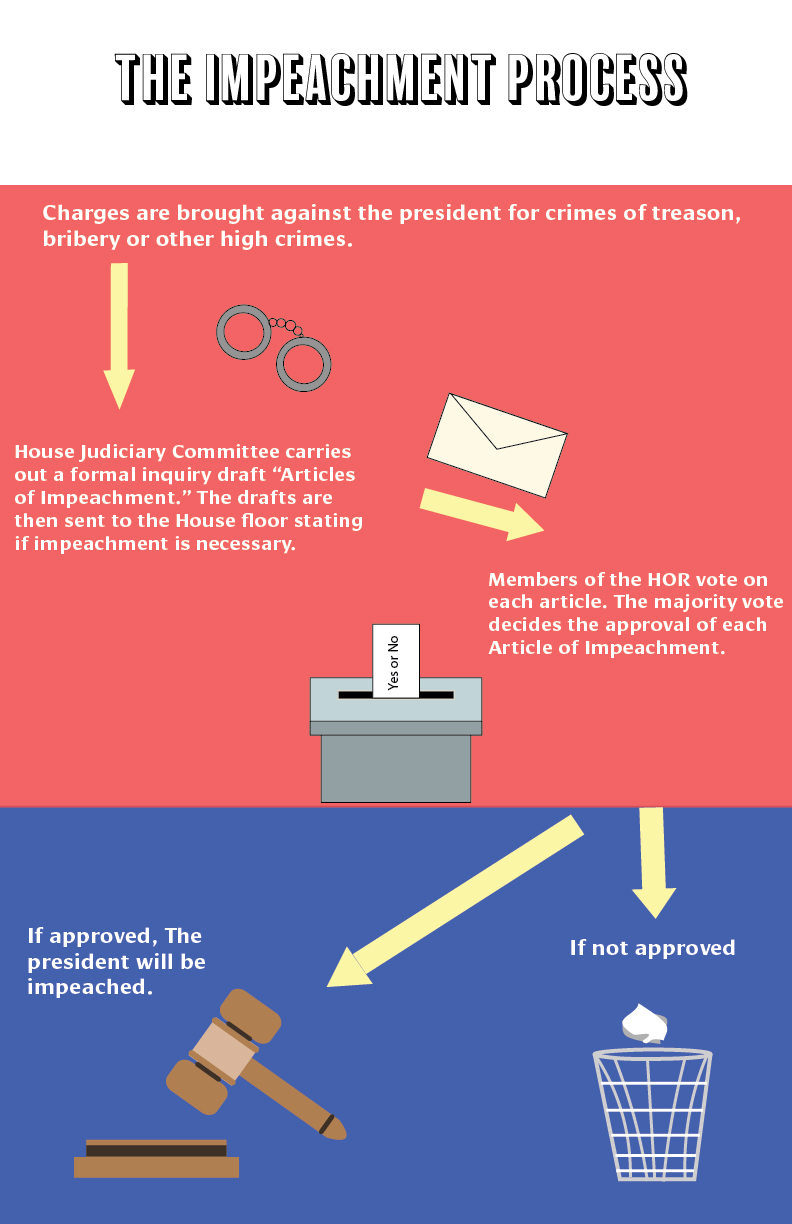 Speaker of the House Nancy Pelosi has opened an impeachment inquiry investigating the U.S. President Donald Trump’s recent phone call with Ukrainian president Volodymyr Zelensky, in which he asked Zelensky to investigate Presidential candidate Joe Biden’s family, one of Trump’s potential competitors for the presidency in 2020.

Debates have since sprouted up about whether what the president did was an impeachable offense or not, which the impeachment inquiry is set up to determine.

“If the House does move forward, the Speaker will likely have the House vote on a resolution that assigns the Judiciary committee to review evidence,” Texas Woman’s University political science professor Jennifer Danley-Scott said. “If the Judiciary committee decides the President committed offenses worthy of removing the president from office, they write up the offenses. Each offense is formalized into an article, and the list of articles is the ‘articles of impeachment.’”

The House of Representatives currently has a Democratic majority, while the Senate, where the process would move next, has a Republican majority. The House first has to vote on each article — and if a simple majority passes any of the articles, the president is considered impeached. Then the Senate has to vote.

“The Senate’s job is to decide whether the president should be removed,” Danley-Scott said. “The senators sit as a jury with the US Supreme Court Chief Justice presiding. The House impeachment managers argue for removal of the president based on the articles, while the president’s lawyers defend the president.”

“It seems likely that there will be articles of impeachment drawn up,” Danley-Scott said. “One of the articles is likely to focus on obstruction of justice, since the House Intelligence Committee is arguing that the White House didn’t give Congressional committees the August whistleblower complaint within the timeline outlined by law.”

One thing Danley-Scott noted as interesting was that, despite general division amongst parties, over 400 representatives and all 100 Senators voted in favor of the White House releasing the whistleblower complaint.

“It shows the parties agree that Congress has the right to these types of documents, even if they don’t agree on much else,” Danley-Scott said.

Opinions from constituents vary, though the results of polls asking for opinions on whether or not the impeachment inquiry is the right courses of action have been historically unprecedented.

“Presidency is about being a leader, not a troublemaker,” said Grace Dison, TWU pre-nursing junior. “If impeachment is necessary to keep this country peaceful, then it is the right decision.”

In the past when the process of impeachment began, it generally faced majority disapproval, but the averages of recent polls show that approximately 51 percent of Americans are in favor of the impeachment inquiry. Forty-six percent support the President being removed from office.

“It’s a little late for them to even be starting this process, considering we’re about to be electing a new president,” said Gabriella Bautista, TWU sophomore pre-nursing major, said. “So it feels kind of delayed and not needed, though I wish it were a thing a while ago.”

To follow the status of the impeachment inquiry, CNN has a webpage set up to provide live updates.