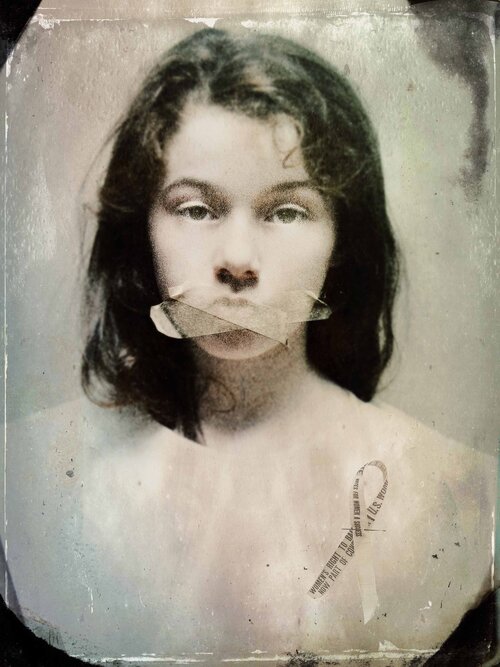 Meg Griffiths, a TWU assistant professor for visual art, and Frances Jakubek an independent photographer, met at a photographic gallery in New York, called AIPAD, during 2019. After having dinner together and a few conversations later, they decided to embark on a journey to create an educational tool through images.

Starting Oct. 26 and running through the end of the fall semester, the duo’s large-scale photographic endeavor, “A Yellow Rose Project,” will be on display around the TWU Denton campus. Although this project was designed to celebrate the 100th anniversary of women gaining the right to vote, the goal was to leave an everlasting impact to encourage others and spark meaningful conversations. Griffiths asked various-level female artists ranging in ages from 20 to 70 to use their images to reflect on the 19th Amendment which went into effect Aug. 26, 1920.

Suffragists wore a yellow rose pinned to their shoulder to show their support for the women’s suffrage movement. However, anti-suffragists were to wear a red rose.

“We chose the yellow rose for that reason because it’s very tied to history,” Griffiths said.

K.K. DePaul’s artwork “Silent No More” and “Women’s Victory” depict the fight women had to take in order to have a voice, and the achievement of women eligible to vote. However, voting only opened up to white women and there were many more years of confrontation before women of all races could vote.

Not only is the history behind the yellow rose significant for women taking a stand against a patriarchal government, but it represents many issues still prevalent in today’s society.

“As women, we have the right to vote, as well as the right to not be manipulated, sexually abused, harassed, stalked, abducted, raped, and purchased, ” Kopenhaver writes in her artist bio.

Voting is an important way for citizens to have a voice in the government and with the 2020 presidential election around the corner education on voting is essential, Jakubek said.

“Bringing the conversation to the forefront is a really important part of this project,” Jakubek said. “With all of us focusing on it [the art] from a lot of different perspectives, it’s really just stressing the importance of how we need to take advantage of it [voting] and especially right now.”

Jakubek‘s artwork specifically showcases the “confusion and frustration” it takes to go vote. Each image is a distorted version of a voter registration form from multiple states. She hopes her images spark inspiration to improve voting accessibility and create a smoother registration process.

Griffiths said she hopes women from all different cultures will look at this artwork and be moved to go vote or become a part of a community.

“A big part of the project is making this safe space for conversation,” Jakubek said.

Each image on display will have a QR code for you to scan, you will be directed to see the artist’s bio and more information about each image.

For more information go to https://ayellowroseproject.com/.