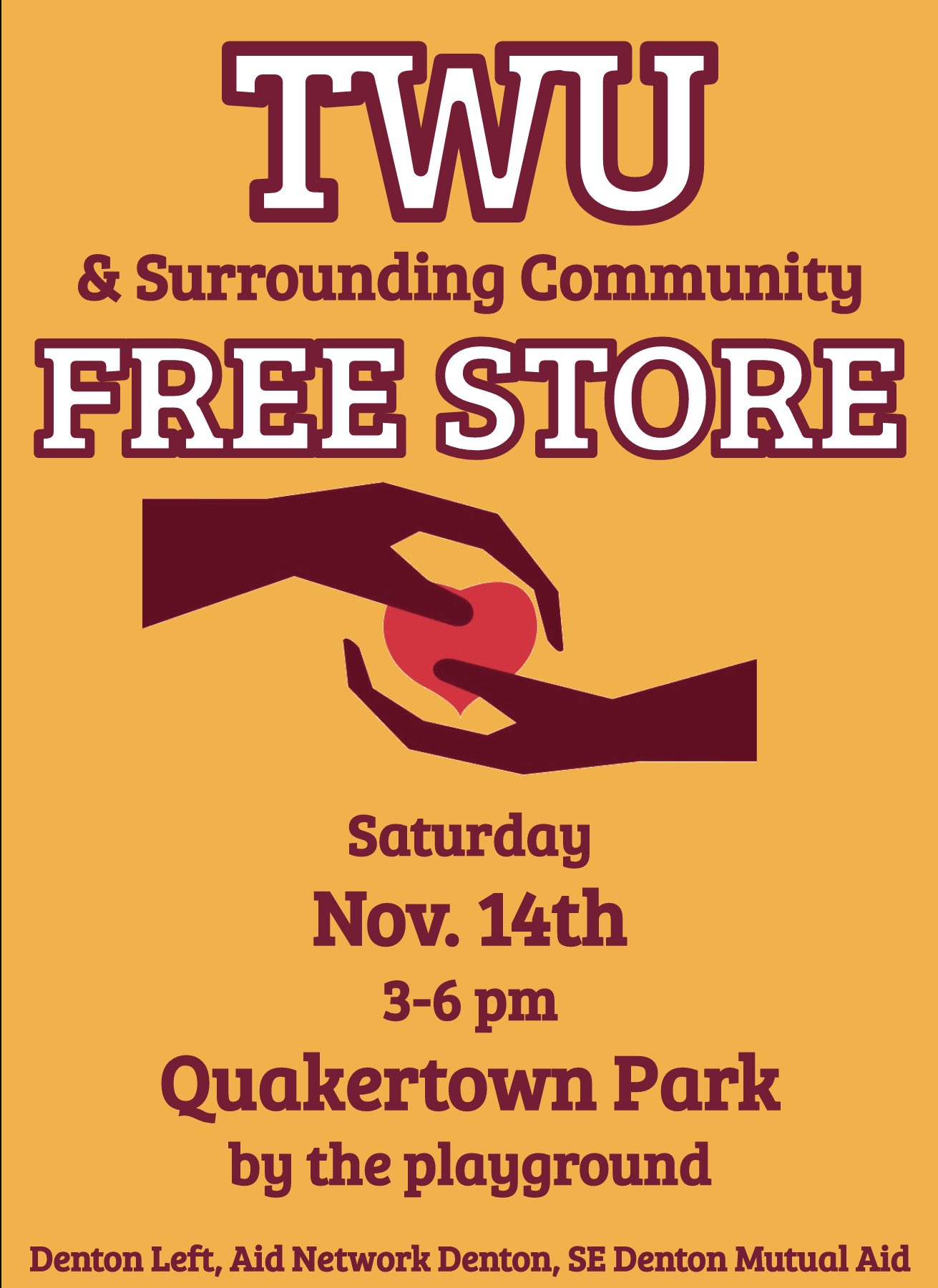 Denton-based leftist organization, Denton Left, hosted their monthly free store in collaboration with affiliated Texas Woman’s University students Nov. 14 from 3-6 pm at Quakertown Park where items such as clothes, food, hygiene products and school supplies were available to attendees. This was the fifth free store the organization hosted this year, each aiming to help the local Denton community by providing basic necessities at no charge.

The Denton Left organization describes themselves as a “big tent leftist” organization and works towards uniting the left-wing activists of Denton to promote the ideas of socialism, and to help the people of the city “in ways that the capitalist system may have failed them,” according to their Facebook page. They accept all individuals who align with socialist and anarchist values, as well as stand against capitalism, bigotry and oppression.

After volunteering during one of the South East Denton Mutual Aid’s free store projects and observing its operations, the members of Denton Left decided to begin hosting their own free store that was easy to maintain and effectively facilitate community redistribution.

“Our goal is to create a community that is capable of and has the commitment to taking care of one another, whether it’s during a global pandemic or the everyday crisis of capitalism,” an anonymous member of Denton Left said. The Denton Left member has requested to stay anonymous to avoid any possible harm due to what they say was a threatening incident in September where a member was punched in the face by a supporter of President Donald Trump.

The organization considers the store a lateral mutual-aid project and gathers items from local individuals and fellow aid initiatives, while most of the available food is budgeted monthly. Denton Left advocates for locals to drop off things they don’t use and pick up anything they need.

“We don’t think of it in terms of ‘donors’ and ‘recipients,’” the member said. “It’s more of a community exchange of resources than a charitable thing. We believe in building strong communities where people look out for one another.

“We also believe in creating modes of distribution and redistribution that go beyond the government and the marketplace.”

This was Denton Left’s first time hosting the event with affiliated TWU students, choosing to work with them after hearing from the students that the area near the campus would be receptive and would most likely benefit from an event like a free store. The organization said that after taking into consideration the hardships of learning how to survive in a capitalist system and the fact that students did not qualify for stimulus checks, they wanted to help relieve the stress of “being forced into normalizing a pandemic for the profit of institutions.”

Denton Left said they find it essential in hosting the store around this time of year not only as the holidays approach but also as they observe individuals experiencing ongoing troubles—even more so now that many are feeling pressured to celebrate and provide for their friends and family in the midst of a pandemic.

“We think it’s important to build the capacity for people to take care of one another whether all of us or only some of us happen to be vulnerable at any given time. As a society, Americans tend to think more about being there for one another during the holiday season, but we want to be here when the good cheer runs dry.”

For more information on the upcoming free store or Denton Left, visit their Twitter.