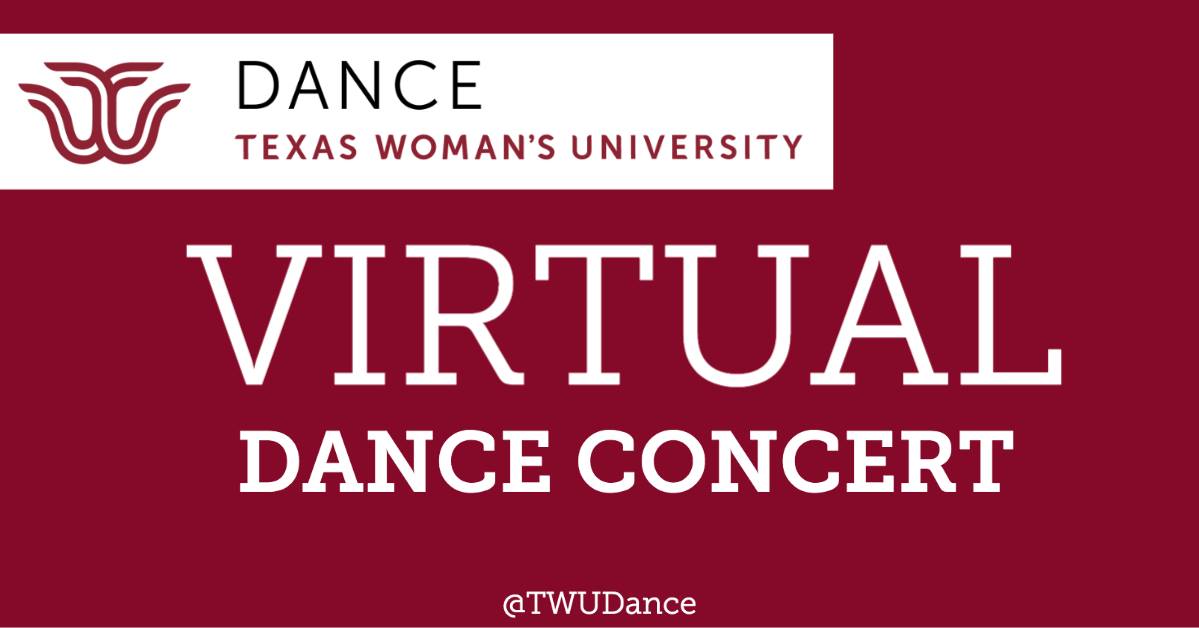 The anticipation grows heavy as the countdown begins, eyes glued to the screen. Friends and family drop their messages of support and elation as they wait for the web page to launch the live concert. Soaring quickly in real time is the viewer count, tallying up the large audience that have all come to watch Texas Woman’s University’s very own dance students present their routines for all to see.

The Texas Woman’s University dance department held their first virtual concert “Virtual Concert: 1200 Seconds” Friday, April 24 and premiered it live on both their Facebook and Instagram pages. In lieu of the remaining semester performances being cancelled due to the school’s shutdown, the department decided on a virtual concert for dance students to still be able to share their projects with the student body. The concert ran for 1200 seconds, or 18 minutes, and presented itself as a slideshow of one-minute routine videos submitted by students.

It is unknown where the original idea for a virtual concert emerged from, according to professor of dance Sarah Gamblin, but the department carried through with the plans when they had begun to “hate” that students were not able to showcase the pieces that they had been working on all semester.

“We just really wanted to provide them an opportunity for students to culminate their work and to continue and finish a creative process that they already started,” Gamblin said. “So, we worked with the limitations.”

Had it not been for the shutdown, three live dance concerts, as well as TWU’s International Dance Company’s events, would have had dates set for their premiers. The dance team was also supposed to attend this year’s American College Dance festival. However, when the COVID-19 pandemic began to escalate, and the school put on-campus operations to a halt, the events, too, were ordered to be called off while the American College Dance Festival was cancelled two days before its start date.

Due to the virtual concert having no fee and being 100% remote, it proved a smooth and uncomplicated task to pull off, according to Gamblin. Preparations for the event included choreography students filming themselves performing and dropping their videos into a Google Drive where they were then compiled into one file for a viewing audience.

On the other hand, due to the concert being free, the dance department experienced a financial loss as a majority of its funding comes from concert ticket sales.

“For a small department like ours, that revenue is significant,” Gamblin said. “All of that has been lost.”

The virtual concert showcased a variety of dancing styles, representative items and images and background settings that the performers used to get their messages across. Students like third-year dance major Irving Maldonado Salinas used a single lighter aflame in the dark to represent the belief that “everything is influenced by the environment.”

“It came to me that this dancing flame would not be the same if darkness did not surround it,” Maldonado Salinas said. “The flame would not even be on without the support that I provide when holding on to the ignition button. My intended meaning is that coexisting with our surroundings can create relations to live in harmony.”

Meanwhile, graduate dance student Riley McCallum used the concert’s platform to express “how the male gaze of the artist skews the form of the human body in comic books.”

“In my last work, this was transformed into a live-action event,” McCallum said. “Having to adapt it for film was interesting considering how male gaze was originally a film theory and at this point, I have taken it through multiple mediums to come full circle back to film.”

A majority of dance students have put emphasis on their advocacy for creating art especially during this time of quarantine while many people have extra time on their hands. They view artmaking as an effective expressive outlet and a meaningful use of time.

“Hone into new ways of living,” Maldonado Salinas said. “Explore within yourself to find what you need to be the brightest light. Find time to be calm and happy with oneself to spread the love that comes from within.”

McCallum also shared his thoughts on the concept of using quarantine time to delve into one’s imagination and using it to direct a creative project.

“People can still have this powerful experience with art but as a maker,” McCallum said. “Play in whatever medium they can and not worry if others will like it. I think this will generate a lot of coherence for people during this time of great uncertainty.”

Gamblin said she hopes for the dance department to host another virtual performance in the future with possibilities of giving the event a specific theme or inspiration as well as longer submission videos. As for this concert, she said that she found it gratifying connecting with students during this time and being part of their creative processes despite the event’s limited preparation time.

The “Virtual Concert: 1200 Seconds” is still available for viewing on the TWU dance department’s Facebook and Instagram accounts. Donations can also be made to support the TWU Dance Scholarship Fund.