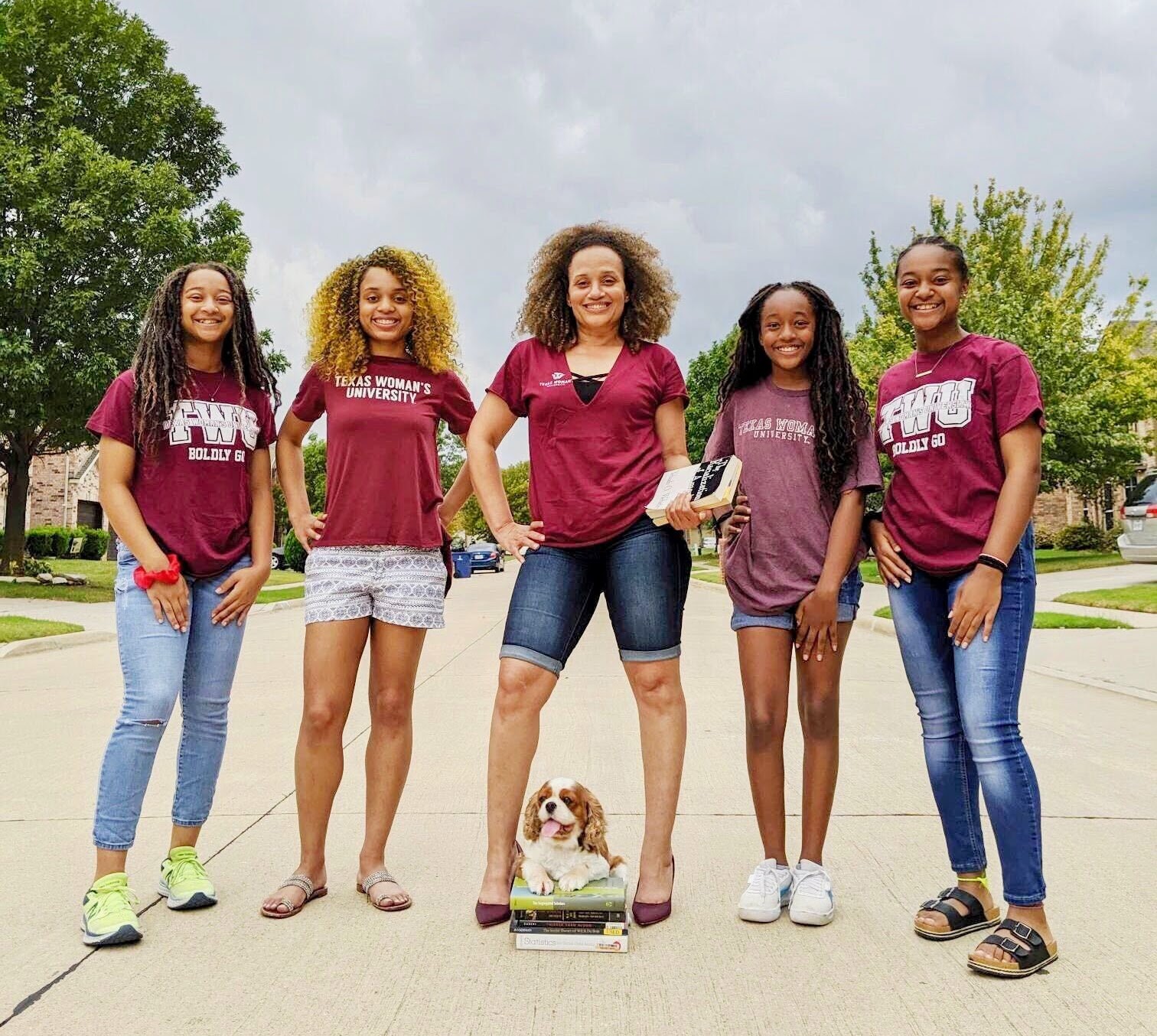 Student-parents search for balance amid transition to online learning

By Catty Tomaszewski on September 9, 2020

Senior fashion and textiles major Jennifer Stanley is just one of many non-traditional student parents at Texas Woman’s University juggling studies, children, and the pandemic at the same time.

Stanley and her 3-year-old son Zeke have been quarantined more than most during this pandemic because of their high-risk status. Although Stanley said she’s grateful to have the option of online classes that will better protect her and her son, the sudden shift in their routine has been difficult to deal with.

“We were in the routine of him going to school and me going to both work and school while he was away,” Stanley said. “All of a sudden that just stopped. He’s used to being around his friends and his teachers and him not being able to get what he’s used to was really hard.”

To deal with her and her son’s needs, Stanley said she uses healthy coping strategies as a mother to calm down and take control of complicated situations.

“Whenever little kids are that young, they show their stress by either having different emotions or tantrums,” Stanley said. “Just try your best to be patient, not only with your child but with yourself. I’ve had many moments where I had to say ‘This is not working, let’s take a step back from the day.’

“We will both do something like painting or drawing where we are spending time together but also helping us calm down and let out our emotions in a healthy way. Even something like cooking a meal together, just something where we’re working together to nourish our minds and bodies. It’s okay sometimes to take a step back and just be at peace.”

Despite still having a year before graduation, Stanley said she’s concerned about not being able to walk and get her diploma.

“I’m scared because I want my son to be able to see me graduate, I want him to have that memory.”

Sociology doctoral student Kemi Johnson Pratt is also a mother that, despite the challenges she’s faced during her daily routines and the current pandemic, has continued to pursue her academic dreams.

“I don’t think I could do this if I wasn’t among the TWU community,” Johnson Pratt said. “My professors are incredibly supportive and challenging, the work is challenging. I couldn’t have asked for a better place to grow, learn, and deal with all of this all the stuff that comes from going back to school.”

Johnson Pratt said she was diagnosed with COVID-19 earlier this summer and completed her summer classes despite getting gradually more ill as time passed. She knew she had to speak with her daughters about her condition and addressed the worst possible scenarios.

“I was so sick, and I had to sit down with my children and tell them I might not come through this,” Johnson Pratt said. “I said ‘I’m either healed before God or I’m healed on earth. Either way, it’s completed.’

“I had to talk to them about if I don’t come through this, here are my desires for you and that is to continue.”

Johnson Pratt is now in stable condition, however, she said she is still recovering.

Although the situation has been serious, her daughters have found ways of providing comic relief and company to their mother during these hard times. They created a podcast to discuss social issues and opinions with their friends, which allows Johnson Pratt to provide research that either counters or supports their opinions. They also have left her encouraging notes, set aside study times together, and have adopted a new member to their family: a Cavalier King Charles Spaniel named Duchess.

Although TWU has provided general services to students, such as the Pioneer Center for Student Excellence and Counseling and Psychological Services, Stanley feels there is still a need for resources, specifically for non-traditional parents at this time.

“It would be great to have a virtual support group just for non-traditional parents where you can log in and freely talk,” Stanley said. “They [TWU] offered the Emergency Relief Fund which really helped, but I also feel like if they had a separate grant for families that would be so helpful. Even though my classes are online, I’m still having to pay for childcare and trying to figure out how to pay for the rest of my tuition and housing.”

Stanley said she’s proud of other non-traditional student parents for continuing to pursue their academic goals despite the pandemic.

“There’s no parenting book, blog, or website on how to parent during the pandemic,” Stanley said. “There’s been plenty of times where I’ve thought ‘I’m just the worst mom ever,’ but you have to remember that there are no directions and we are all figuring it out as we go and trying our hardest.

“Our children see us push through not only being a parent but also being a student and taking care of them during all this. They’re going to look back on this time and have a lot of respect for us. Just knowing that my son is going to see that from me gives me encouragement.”

Catty Tomaszewski can be reached at ctomaszewski@twu.edu.

Published in Coronavirus and Lifestyle