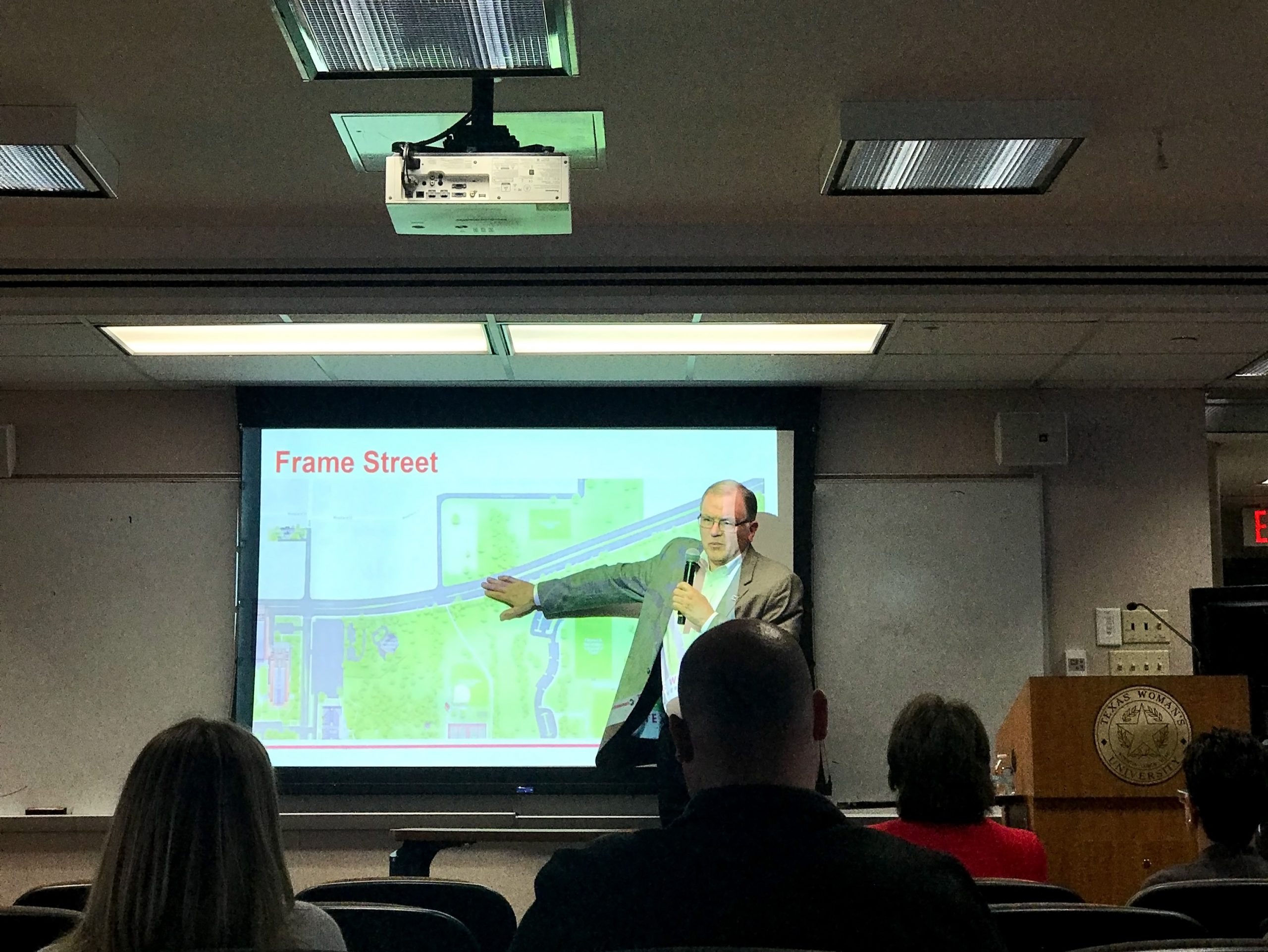 Administrators reviewed university-wide changes for the 2021 and 2022 fiscal years in two days of hearings Feb. 5 and 6. Though the discussions were meant to allow students to weigh in on changes before they are presented to the Board of Regents, only one student showed up for the hearings, which covered proposed increases in tuition and parking rates, changes in parking allocation and changes to housing for residents.

Several students did view the event, which was live streamed for remote students and those that could not attend the hearings, online.

Jason Tomlinson, vice president for Finance and Administration, said the university uses the Higher Education Price Index, which studies the cost of inflation for colleges and universities to determine the rate by which TWU would need to increase tuition to maintain current academic standards. At 2.5%, TWU’s proposed increase for 2021 falls just under the latest HEPI estimate of 2.6%. Since estimates have yet to be released for 2022, TWU averaged the past three years of HEPI estimates to arrive at the 2.93% increase proposed.

“I want to be clear and tell you that I’ve vetted this very carefully with each academic unit that is requesting an increase because I know that it’s expensive to get an education and people are taking loans,” Dr. Carolyn Kapinus, interim provost and vice president for Academic Affairs, said. “We don’t want people to incur more costs than they have to. On the other hand, we do have to make sure we have the resources we need to deliver the highest quality education possible, so it’s very important to balance both of those factors.”

Kapinus said many of the requesting units have high equipment fees while others, like Education, incur exam fees for student teachers.

Higher rates would also support departments receiving student fees, such as Fitness & Recreation and Instructional Enhancement, which funds services like the Write Site and the Pioneer Center for Student Excellence.

Administrators presented the Parking Committee’s recommendations of rate changes during the hearings, including a 186% increase in the price of parking permits for commuters.

Faculty and staff reserved permits will be available for $350.

The rate changes account for the increasing decline in the sale of parking permits since the 2016-2017 fiscal year. The new rate structure will generate the $1.5 million needed from the sale of a projected 7,900 permits.

“Some of that [permit sales] has gone down because of construction on campus as well as being able to use the church, which we’re very grateful for, but basically, you’ve got to generate that revenue over 8,000 parking permits sold,” Tomlinson said.

Tomlinson said the proposed cost for permits is less than the rates proposed by a parking consultant who evaluated the expense of operating parking on campus, and the changes have been discussed with student leaders and in RHA town halls.

Tomlinson also discussed recommendations from the Parking Committee and students about how to improve parking on the Denton campus.

Among the changes being considered are to pave an area between Jones and Grove Street, where construction workers currently park, adding more spaces to the east side of campus.

Tomlinson said adding the lot would allow the university to consider resident requests for parking near Parliament Village and still accommodate commuters who need access to the center of campus.

A contractor is evaluating how many parking spots could be built in the proposed space.

Tomlinson said the university is also considering what to do with a contractor-built lot northeast of the intramural field that houses about 75 spaces, which could serve as a remote lot with a lower price point or as a resident lot to help the 100-car overflow from Lowry Woods, Stark and Guinn, with shuttle stops.

Other recommendations being considered include:

Tomlinson said there has been some debate over whether allowing students to buy two permits would unfairly favor those with more disposable income and would pose the same issues all-decal lots created – more competition for spaces.

Nursing major Madyson Gross, a resident of Parliament Village’s South Hall and the only student to attend the hearings in person, said she has been in talks with administrators about how to address concerns about parking.

Gross is missing several muscles and ribs and has nerve damage following surgery, which makes what she said is sometimes more than a 10-minute walk to her dorm room difficult.

“I don’t consider myself disabled, but I know there’s a lot of students with smaller issues like mine that have issues walking to and from,” Gross said.

Gross said she comes home from work at 1 or 2 a.m. and feels unsafe walking across campus at night.

“They say you can ask for cops to come and pick you up, but the cops are not feeling friendly about that, and I don’t necessarily blame them [because] it’s not their job, really,” Gross said.

Gross said the option to park anywhere after 4 p.m. is not convenient for residents like her who often work late into the evening.

Gross is among more than 700 students who have signed a Change.org petition to “Change parking in Parliament Village at TWU.”

While Tomlinson said they are working with the petition creators to form solutions to concerns, the current parking situation creates less conflict than previous allocations.

“We’re still working on it – it’s a process in development, but we get less complaints today on parking than we have since I’ve been here, and I’ve been here for two years,” Tomlinson said.

TWU will rezone dorms beginning this fall, with Parliament Village moving from sophomore housing to freshman dorms and sophomores occupying Guinn and Stark.

“We did some focus groups, and the students who participated in that felt that the amenities associated with Parliament Village were more ideal for first-year students, whereas the amenities of Guinn and Stark were more ideal for continuing students,” Dr. Monica Mendez-Grant, vice president of Student Life, said. “In Guinn and Stark, students have control over the air conditioning as well as private restrooms, like a suite. In Parliament Village, there’s more community space associated with the pod that they think would be a better match for first-year students.”

Mendez-Grant said students are being informed of the changes as part of the priority housing sign-up process.

To view all recordings of the student opinion hearings, visit https://livestream.com/TWUDenton/TWU-Tuition-Hearings.