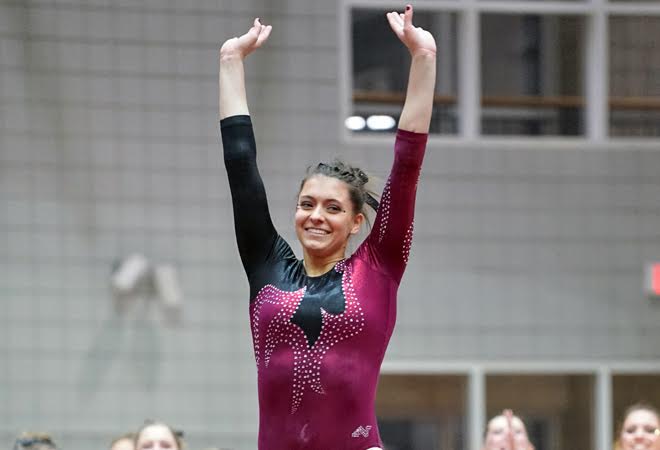 Star gymnast speaks of move from spectator to competitor

A smile and then one deep breath before Schyler Jones climbs atop a brown gymnastics beam, where music plays and she begins her routine.

Growing up as a club gymnast in Denton, Jones attended many of TWU’s gymnastics meets as a spectator, watching her former teammates and even her sister, Spencer Jones, compete on the school’s behalf.  Jones joined the team in 2015 and has competed as an All-Around gymnast since her arrival.

Jones said: “I kind of grew up going to TWU meets, but I never thought that maybe that would be me one day.  My sister was on the team my freshman year and that was really cool. I was excited to compete with her again and the [collegiate] atmosphere was totally different from club gymnastics.”

Since coming to TWU, Jones has been a valuable asset to the team, contributing to team awards and some individual awards including second place at the 2016 USA Gymnastics Collegiate National Championships. Jones has earned a career high of 39.200 as an All-Around and her performances have helped TWU succeed in competitions. When Jones first joined the team, she was excited to transition from club gymnastics to the collegiate level.

Jones said: “Everything you do is to contribute to the team score and not really individual anymore. So I was just excited to put my routines out there, I was a little nervous, but more excited than anything. It’s great, I still have moments in my mind I play back.”

Jones encourages other athletes looking to join collegiate gymnastics not to be discouraged by lack of teams or scholarship opportunities.

“Gymnastics scholarships are really competitive because there’s not too many schools that have gymnastics, but my mom helped me and my coaches. We contacted as many schools as we could and asked if they had any positions open and went on visits, but it was clear to me that I wanted to go to TWU. It is a very difficult road because there’s not too many gymnastics teams, but I say go for it. If that’s what you want to do keep looking and keep working at it and coaches will see your potential.”