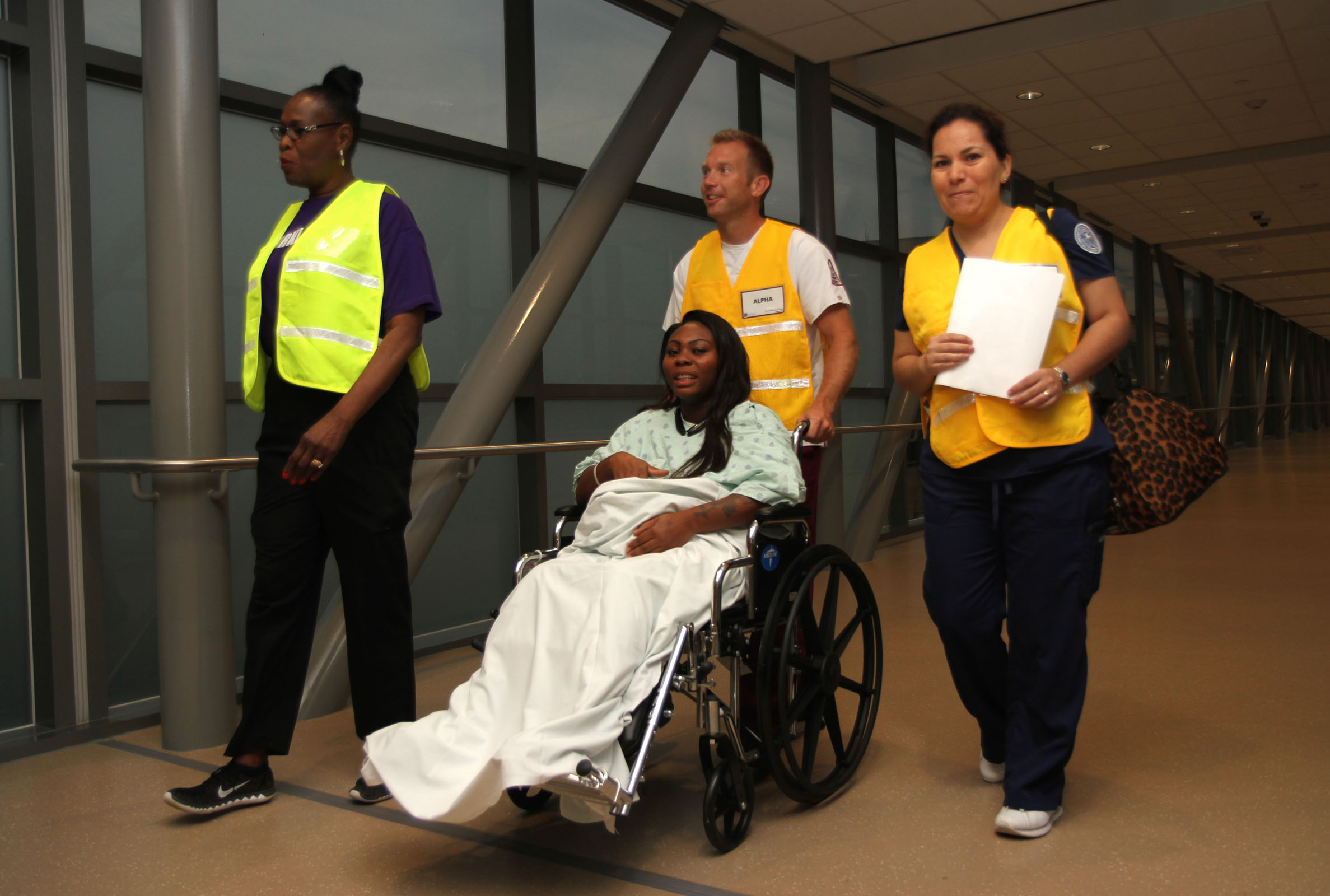 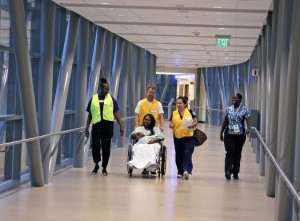 DALLAS — Building on the university’s more than 60-year relationship with one of the nation’s largest public hospitals, about 70 Texas Woman’s University nursing students from the Dallas campus assisted Parkland Health and Hospital System in making the historic move to its state of the art new hospital Aug. 20-21.

TWU nursing student Jeremy Guthrie was part of the “Alpha Team” that moved the first Parkland patient across the Mike A. Myers Sky Bridge to the new facility. A photo of him assisting in this move was featured in the Dallas Morning News and in local television media coverage.

“It was a fascinating experience to see the dynamic of what’s involved in moving such a huge hospital to an even bigger hospital,” said Guthrie, who volunteered in patient transfer. “It was an extraordinary day and a preview of the communication and patient skills necessary for my future nursing career.

The effort to have students and faculty involved in Parkland’s move was led by Stephanie Woods, associate dean of nursing in Dallas who also serves on the Parkland Hospital Board of Managers.

“I felt it was important for our students to participate in this once-in-a-lifetime opportunity to help a major hospital move to its new location,” Woods said. The new Parkland hospital was the largest public hospital construction project in the nation.

“Our students were simply outstanding,” Woods said. “They were patient, doing whatever anyone asked. I am so very proud of them. During the move numerous Parkland staff complimented our students on their willingness to help and their professionalism.”

TWU’s relationship with Parkland began in 1954, when the university’s nationally ranked nursing program began at the Dallas hospital. The relationship continues to the present day, with TWU nursing students performing their clinical rotations at Parkland, many graduates continuing and advancing their careers at the hospital, several alumni serving in prominent positions at Parkland and some Parkland nurses and other leadership officials teaching at TWU.

“We are so appreciative of our long partnership with Parkland and how working together we are able to impact the quality of health care in Dallas and beyond,” Woods said. “To be able to assist Parkland in one of its historic milestones shows how significant we are to each other, and how our meaningful relationship will continue well into the future.”

Over a 36-hour period from Aug. 20 to Aug. 21 Parkland Memorial Hospital moved 626 patients to the new Parkland Hospital — a 2.1 million-square-foot, state-of-the-art facility. More information on the new hospital can be found at www.newparklandhospital.com.

Published in Features, LATEST and News