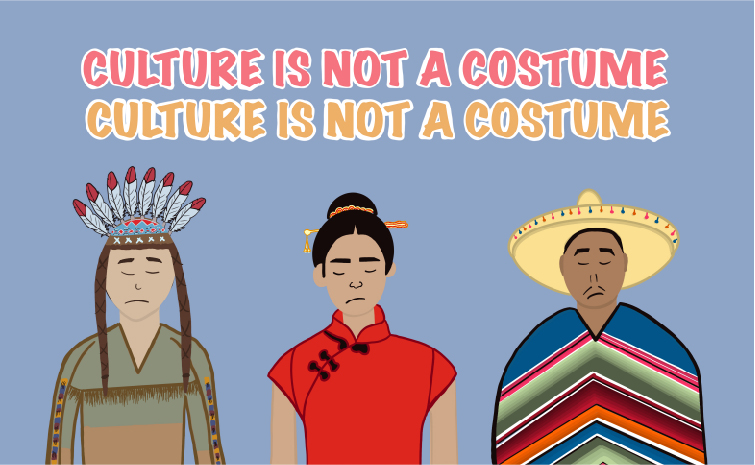 Indigenous culture is not a costume

Every year, Halloween gives us the opportunity to dress up and express ourselves through festive costumes. While ghouls, brujas, and dressing up as Dracula are harmless ideas for costumes, dressing up as an “Indian princess” is not – it’s cultural appropriation.

There’s a huge issue and real harm in thinking that indigenous culture is something we can partake in. It’s simple – culture is not a costume.

Cultural appropriation is the “use of a culture’s symbols, artifacts, genres, rituals, or technologies by members of another culture,” Rogers, 2006. Unlike costumes, indigenous people can’t stop being who they are – it’s who they are every day. For a country that has an infamous history of genocide and erasing indigenous culture, it’s dehumanizing.

Indigenous peoples have experienced centuries of oppression and violence and still continue to do so. Currently, there is a huge crisis of missing and murdered indigenous women across the U.S. Indigenous women are 10 times more likely to be killed than the average national murder rate. Even then, a study found that there is a serious lack of accurate data from the U.S. Department of Justice. The Urban Indian Institute discovered that only 116 out of 5,712 cases were recorded into the database.

Additionally, indigenous people have yet to receive proper reparations of the stolen land we currently live on. What’s worse is that still – they have to defend the land against those who threaten it.

Unfortunately, indigenous people are not the only group that is subjected to cultural appropriation. People of color, particularly black people, have experienced humiliation when people think it’s okay to co-opt parts of their culture (see: wearing ethnic braids while many have been ostracized for their natural hair).

Not only is it insensitive, it is morally degrading. The same goes for wearing “leis” for “island” themed parties or that Mexican sombrero you think is “cool.” When these groups of people attempt to voice their outrage against appropriation, they are often silenced or ignored.

It is important to recognize that stealing someone’s culture is not what you think it is. It’s not appreciation nor is it a celebration. It’s extremely painful for marginalized people to see their culture being worn when they’re continuously being minimized by society.

It’s important to ask ourselves: “What harm are we creating by taking someone else’s culture?” Indigenous culture has endured and continually suffers at the hands of oppression. While you have the privilege and convenience to take off the costume – others cannot. Cultural appropriation is an attack on their very existence. There is a responsibility of teaching and educating others to respect other cultures. We can admire other cultures while still being respectful.

Cultural appropriation has no place in our society, especially during Halloween.