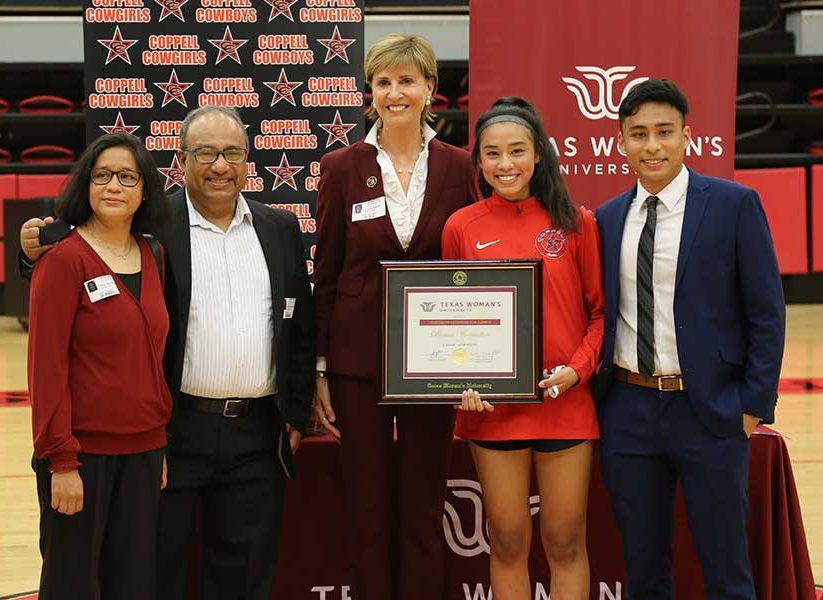 Manandhar was awarded the university’s most prestigious scholarship because of her academic and service achievements. She launched a non-profit organization in 2016 alongside her brother called “Soccer for Nepal.” The organization gives cleats and other soccer gear to Nepalese individuals of all ages and has so far provided 500 pairs of cleats.

“One of our biggest missions back then was just to get equipment to kids in Nepal,” Manandhar said. “In 2009, we visited Nepal and we saw little kids on the ground, little kids playing soccer on not even any grass. They didn’t have any shoes and there was glass all over the fields, and we just kind of saw how privileged we were and then really wanted to do something.”

Manandhar also volunteers at the Coppell Toy Drive, Hats for Hope and the Coppell Community Garden, and is involved with the National Honor Society. She is also a member of the Junior World Affairs Council and a co-creator of the clothing brand “Share Health Shirts” alongside her brother as well.

“’Share Health Shirts’ is an augmented reality brand,” Manandhar said. “On the back of the shirts, there is a QR code, and then once you scan it, there’s an augmented reality message. This brand was originally thought of to help with mental health, and then during the pandemic it kind of put a smile on people’s faces. A lot of our proceeds go to mental health organizations like the American Foundation of Suicide.”

Manandhar currently plays soccer for Coppell High School’s girls soccer team and is planning on majoring in computer science at Texas Woman’s University in the Fall of 2021.

“I am super excited to go to TWU in the Fall,” Manandhar said. “I feel like going into my field—which is computer science—as a woman and a person of color, I just think the support I would have would be tremendous.”

The scholarship is estimated to be worth $52,000 and covers all tuition and fees for four years along with an annual stipend. The scholarship was awarded by Chancellor Carine Feyten during a surprise visit to Coppell High School.

“Binivaa is an outstanding leader, academic and an athlete who already imbues the qualities of our campus culture,” Feyten said. “This scholarship award is not just based on academic prowess—it’s the entire person.”