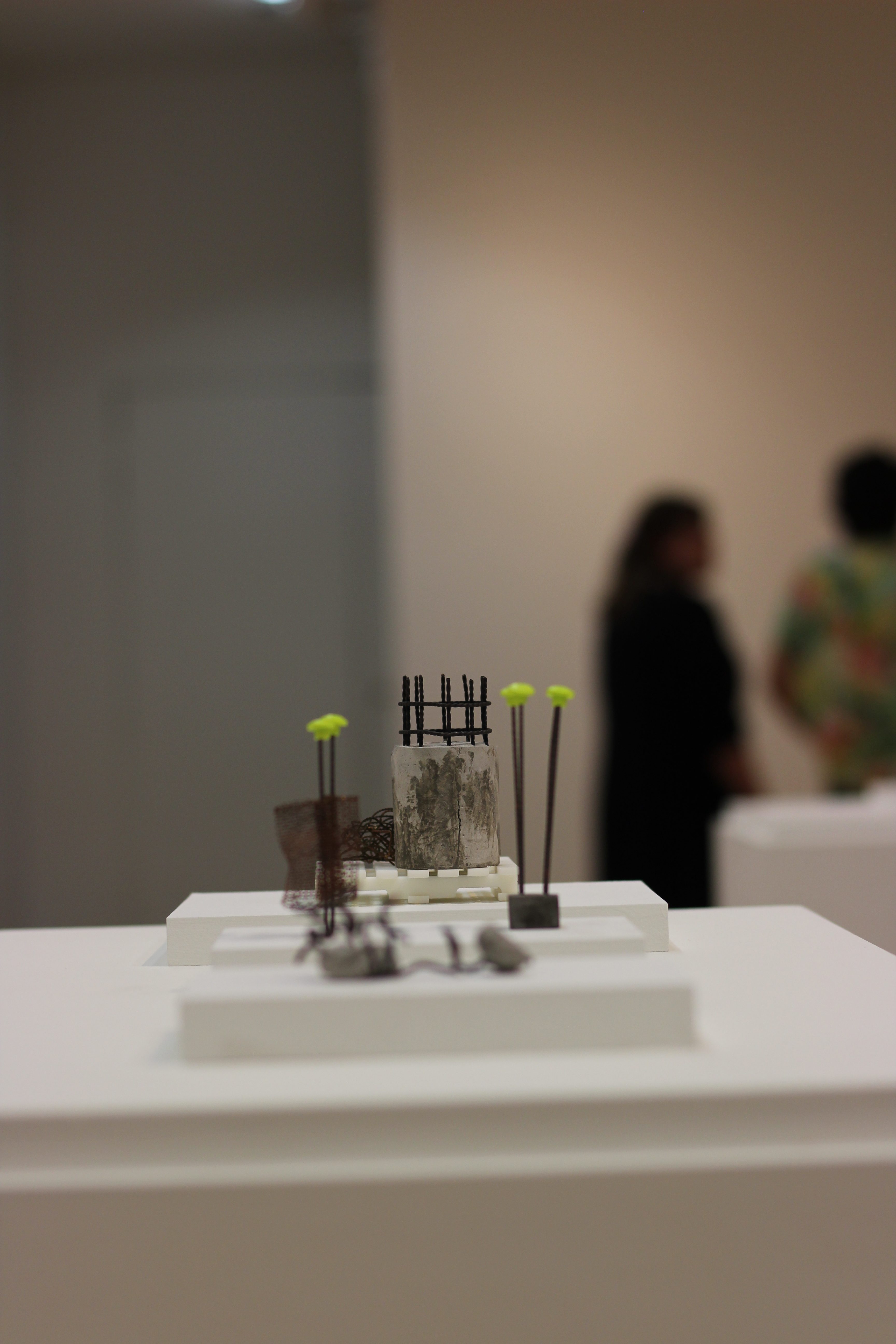 The Texas Woman’s University Department of Visual Arts held a reception on the Denton campus in honor of an exhibition for Dallas-based artists Natalie Macellaio and Giovanni Valderas.

The reception was held last Thursday, Aug. 29 to celebrate the opening of the two exhibitions in East-West galleries located in the Texas Woman’s University’s Arts building. Valderas and Macellaio are both graduate students from UNT and have also taught art classes. Both the artists were in attendance and available for questions and discussions about their art.

Macellaio is a reconstruction artist whose main focus is metalwork. Her exhibit had metal contorted into different shapes lining the walls of the gallery. People came in and stood in front of her pieces and many asked her questions about the meaning behind them.

Macellaio says she gained experience with metal from working as a jeweler but decided that the industry was too “into the money.” Instead, she began to use metalwork hand-in-hand with her passion— art. Macellaio said the series on display currently is inspired by construction.

“We constantly tear down and rebuild everything to accommodate going someplace in a quicker manner,” Macellaio said.  “I’m just really interested in the repetitiveness of it and how long stretches need to be created.”

Macellaio has a passion for working with metal because she says it holds a cultural significance. According to her, the world we live in has a desire for silver and gold because of the monetary value of them. She wanted to show a different side to these materials.

“[Society wants] to show off our wealth through silver and gold,” Maciello said, “I’m sort of doing it the opposite way using concrete, nickel, steel and copper.”

Maciello got the inspiration for this series because she drives often and sees a lot of construction. She said there were a few times when she pulled over on the side of the road and took pictures of fencing and things that inspired her to create the art she did.

Valderas drew inspiration from his predominantly-Latino hometown, Oak Cliff. Valderas said he has learned to not be afraid to embrace his culture, and that this has a big impact on how he creates art.

Valderas’ expression of culture caught the attention of Vanessa Dorado, art education senior who was in attendance at the reception.

She said she came to the reception and saw the art was in Spanish and immediately called her friend to come and see it.

One of the most popular pieces on display in Valderas’ exhibition is “Casita Triste,” which translates to “Sad Little House.” The houses are brightly colored piñatas with faces on them.

Valderas said he got the idea after he saw that the community he grew up in was changing. He saw gentrification and displacement happening when large developers would destroy older houses to build modern houses that the original owners could not afford.

“I started seeing in the neighborhood there was a certain dialogue that was happening,” Valderas said. “[People were saying] how great it was that the new development was coming, but no one was talking about the families that were getting displaced.”

The gentrification in the poverty-stricken neighborhoods of Oak Cliff is an issue Valderas feels is important to discuss. He said the vision for the Casita Tristes started as an idea of empowering a community that has been consistently marginalized.

Valderas also has pieces that match the Casita Tristes in eccentricity, but have words and phrases on them that might be confusing to some admirers, such as “No hay pedo” and “Ay te miro.’

Valderas felt he was doing the students he was teaching a disservice by not showing them art that reflected who they were and decided to make it himself. Valderas said the phrases in his art are slang that was commonly said between him and his friends growing up, and that it’s a mixture of Spanish and English.

“[The slang] is inherently ours,” Valderas said. “It was the neighborhood’s language. The gallery became my neighborhood.”

The exhibition for Natalie Maciello and Giovanni Valderas will be open until September 27. For more information on the exhibition, visit the Department of Visual Art’s website.