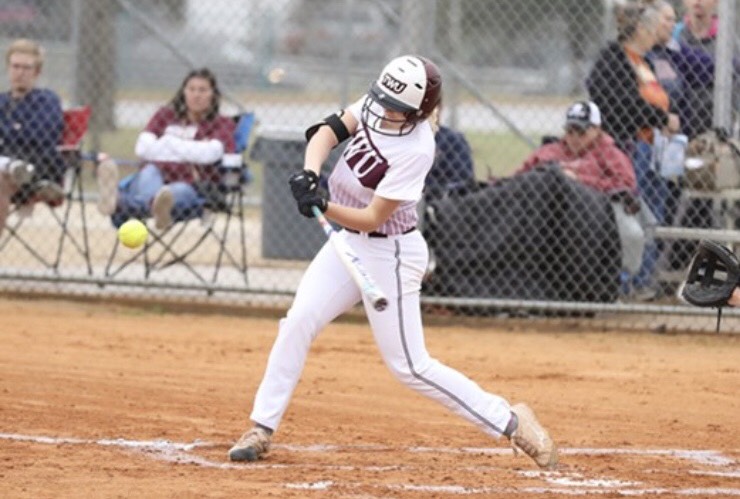 A love for competition 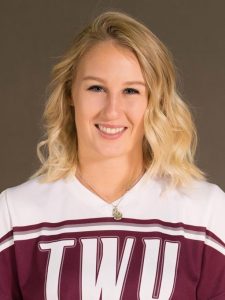 Number 17 on the field, sophomore Hazel Puempel started running the bases at four years old. What started out as a love for competition on the T-Ball field, Puempel found that her passion would follow her for many more years.

In the 2017 season Puempel started and played a total of 54 games. According to the TWU Softball webpage, Puempel held a 3.75 batting average, had 39 runs on 54 hits, hit 11 doubles, 32 RBIs, and 3 home runs. First baseman recorded a .970 fielding percentage with 12 assists and 277 putouts. Puempel was second on the team in batting average and hits in 2017. She also held a spot on the Lone Star Conference Commissioner’s Honor Roll in the Spring and Fall.

Aside from her love of competition, Puempel expresses love and closeness amongst the team. “Anyone can have a bad day and someone will be there to pick them up. I love my team and the relationships I get to build with all of them. It’s a lot of fun.” says Puempel. With any sport comes off days, Puempel says, “Sometimes we fall into slumps and the only way to get out of them is to work through them, but it’s then that we rely on one another.”

Having multiple games throughout the year and juggling school work on top of practices and games can be challenging to balance, says Puempel. Taking a few hours out of the week to just focus on school work seems to be the key for this first baseman. “Anytime I have free time I’ll usually try and work on homework or study” says Puempel. Just like many college students Puempel admits that she binge watches Netflix and takes the occasional, but much needed, nap.

With a major in Business Administration but soon to be Finance, Puempel explains that softball has taught her to adapt to change.

“Life will always change in one way or another and we have to learn to adapt to those changes.” says Puempel.

Starting off on the T-ball field to being first baseman who also pitches a little for the TWU softball team, Puempel says she is proud of where she is and is blessed to have made it so far: “I’m proud of how much I’ve grown as a player.”

As for Puempel’s future you can catch her on the field on March 7 at 4 p.m. and 6 p.m. at the TWU field competing against Oklahoma Christian. Later games on March 9 at 6 p.m. and March 10 at 1 p.m. and 3 p.m. against Texas A&M-Kingsville at the home field.

“As for softball, I just plan to continue to compete and have fun. I hope to get better every year.” says Puempel.

Published in Athletics and Campus