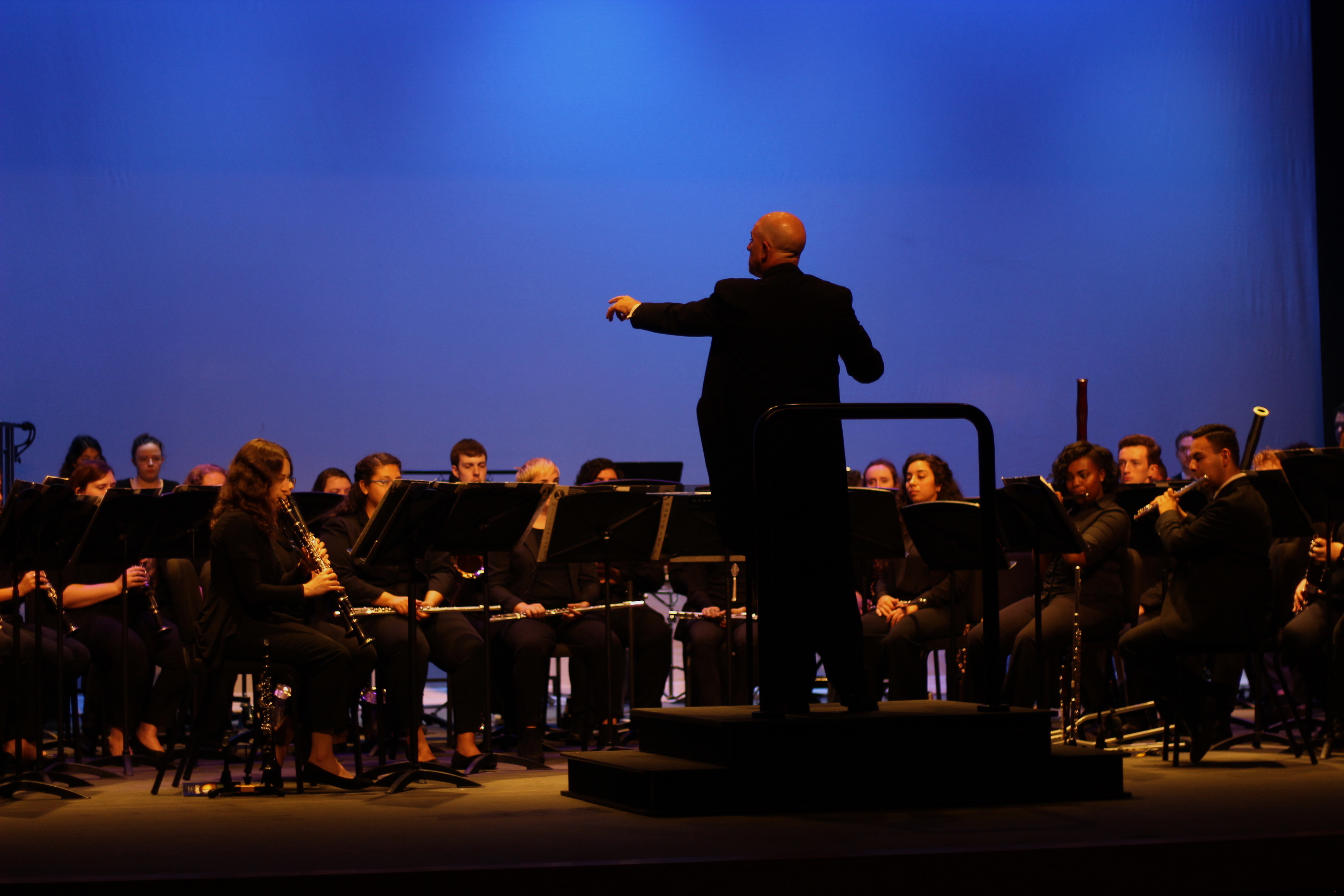 Dim, fluorescent lights surround the hall, reflecting off the colony of silver and brass that occupies the stage. Hands work skillfully and chests heave as performers follow the pace of the baton-bearing conductor who leads the symphonic harmonies. Though not the typical string and bow ensemble, the wind chorus fills the atmosphere of the Margo Jones Performance Hall with comparable elegance and grace.

Brought to the stage by students proficient in wind and percussion, the Texas Woman’s University’s Wind Symphony held their first concert of the year Oct. 3 at 7:30 p.m. where the ensemble played a total of six songs.

The wind symphony showcased a collection of musical scores all following the theme of natural elements including earth, wind, fire and water, as well as the addition of a fifth element: space. Each song performed represented a different element, delivered by a sea of clarinets, flutes, trumpets, trombones, oboes, bassoons, saxophones and various percussion instruments. Some pieces of the program introduced featured instruments such as the harp, the double bass and the piano.

“This was my first time going to a TWU wind symphony concert, and I was blown away,” first-year music therapy major Celia Nowlin said. “Being a pianist and vocalist, I don’t usually get to experience many instrumental ensembles, so I always enjoy being able to listen to a wind symphony or orchestra.”

The night’s show was conducted by Dr. Carter Biggers, the director of bands and assistant professor of music. The event organizers planned for TWU music education graduate student and assistant Melinda Najera to take the podium and conduct the second song of the night, “Sheltering Sky.” However, Najera’s mother passed away recently and she was not able to make it to the concert. Despite this, Dr. Biggers said that Najera insisted the Wind Symphony continue with the scheduled program and showcase the song.

Second-year music therapy major Shachar Albalancy said she enjoyed “Sheltering Sky” the most and its dedication to Najera.

“It was my favorite piece,” Albalancy said. “It was so beautiful, and I could feel the emotions in it.”

Some attendees said they came to support fellow classmates and friends and heard about the events through those within the symphony as well as the TWU events calendar.

The concert turnout filled the seats of the Margo Jones Performance Hall. Many of those who came said they enjoyed the show and would suggest Wind Symphony events to friends and fellow students in the future.

“They have such a unique sound, and they played such fun repertoire,” Nowlin said. “It really is captivating to experience.”

Featured Image: The Wind Symphony Ensemble follows the conductor during a dress rehearsal at The Margo Jones Performance Hall in Denton, Texas on Wednesday, Oct. 2, 2019. Photo by Sarah Pham.