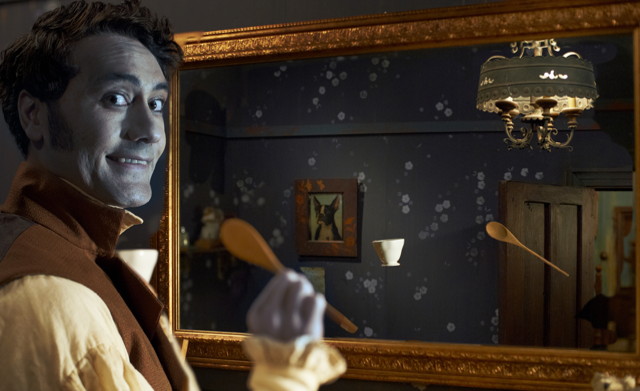 What We Do in the Shadows

Viago, Deacon, and Vladislav are just some flat mates in New Zealand. Oh, and Petyr, but he’s usually in the basement. They argue over who does dishes, they sleep all day, attempt to party at night, feast on human blood (preferably virgins, though they’re so hard to find), and avoid crucifixes at all costs. Just some regular, vampire flat mates.

What We Do in the Shadows is a hilarious mockumentary from New Zealand, a great mix of horror and comedy. The movie portrays a variety of different perspectives surrounding a vampire, from the building blocks of nightmares to Dracula-inspired to the more modern party vampire. Did I mention the vampire/werewolf feud?

The film also explores the relationships of vampires with humans. When Petyr makes a victim a vampire, the guys aren’t too happy. Nick, newly converted, tries to keep ties with the human world, and while everyone likes his friend Stu (everyone agrees Stew is better), Nick’s big mouth informs what seems like half of New Zealand of his new undead state. Which of course is met with unbelieving, attraction, and a vampire hunter in the house (Spoiler: he kills Petyr).

All of the vampires have different problems, some silly, some tender. Viago always bites the victims main artery, causing blood to spurt everywhere. Vladislav hasn’t been the same since a bad break-up, thus can’t hypnotize anymore. Deacon never does his chores. They look ridiculous because they can’t see their reflection, and can’t party because the club has to invite them in. And of course they stay immortal while the ones they love wither away and die. For the undead, after-life really sucks.

The movie hits the horror side really well too. There were countless times I jumped out of my seat: waking up Petyr, chasing victims through the house, the werewolf fight were the cameraman is torn apart (great timing on that one).

I didn’t realise until after I left the theatre that one of the directors, Jemaine Clement, who introduced the movie at the screening, played Vladislav.

Yeah, the movie sounds a little complicated, but how else could it be. Full of situational humor and every night obstacles, What We Do in the Shadows is one of the funniest movies I’ve seen this year.