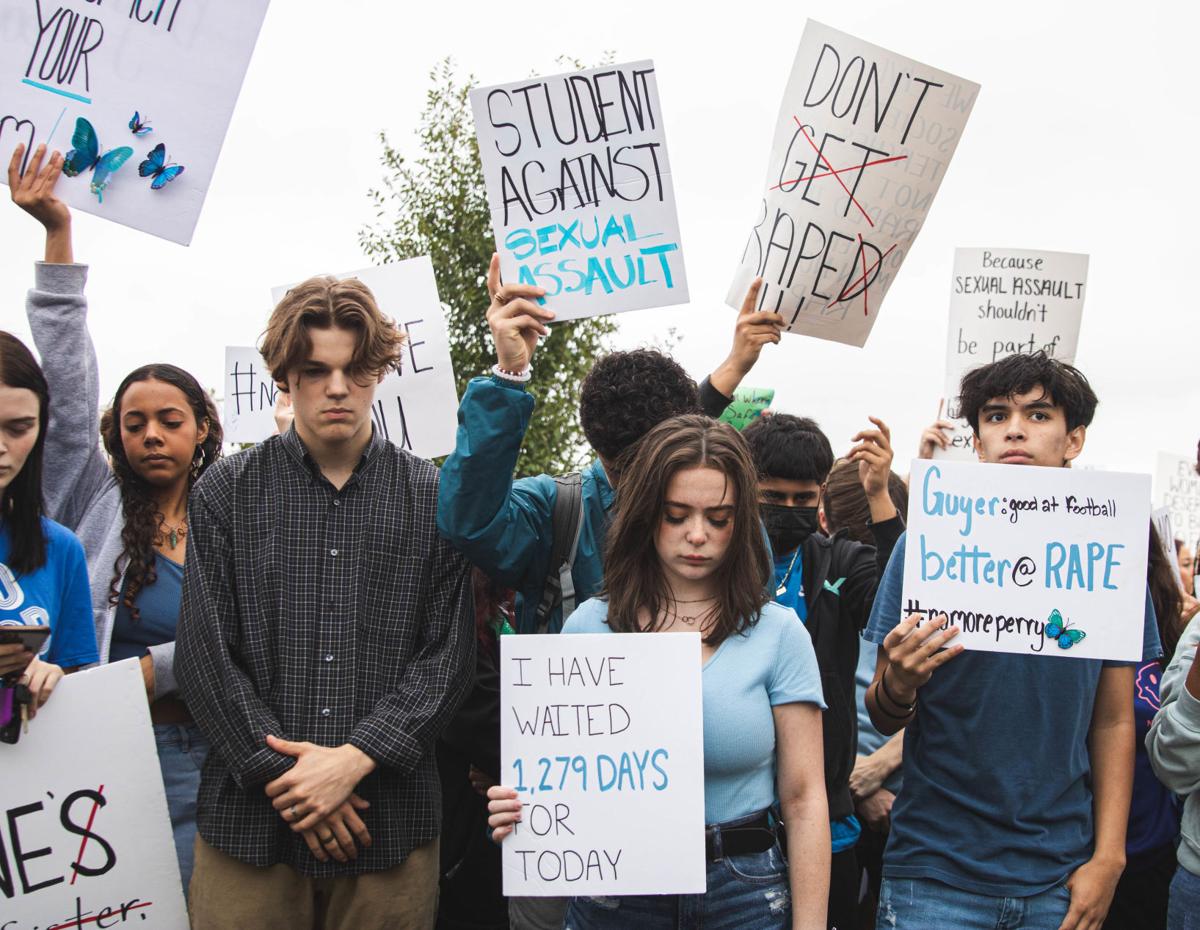 1,279 days after her alleged assault, the first reported survivor of a Guyer High School student lead hundreds of students during a walkout protesting Guyer’s and Denton Independent School District’s response to sexual assault reports across campuses.

The accuser nor the alleged assailant will be named as there have been no arrests made and both are minors.

According to the petition made by the first alleged survivor, the accused has assaulted dozens of women since moving to Denton over four years ago, leaving them with trauma, fear, self-deprivation and the pain of no one ever believing them.

Most recently, the 17-year-old accused reportedly assaulted a 15-year-old student of Guyer on the school campus on Oct. 6, the survivor of which was hospitalized. On Oct 7., the Denton Police Department received a report of the sexual assault. The accused student was later allowed to play in Guyer’s football game on Oct. 8, despite the coaches’, school’s and district’s knowledge of the report against the accused.

“I think it’s ridiculous,” Guyer sophomore Magie Mangawe said. “The school administration and the district knew about it beforehand, and they still let him walk on the field and be called a hometown hero once more.”

The accused was, up until recently, verbally committed to the University of North Texas. After the sexual assault allegations, UNT has since pulled the accused’s offer to play for the university’s football team. This decision is considered a step towards justice for the victims according to Mangawe, but she also fears that the decision may be performative due to the increased media coverage of the case.

“I think it speaks volumes to what’s really happening, and I think that Denton ISD should be ashamed of themselves,” Jennifer Jenkinson, the mother of the accused’s first victim, said. “When outside institutions are so quickly recognizing this kid has a problem and they realize ‘we don’t want him to come here,’ there’s an issue.”

The accused’s permitted participation in the football game was what Jenkinson said was the last straw. Her daughter immediately created a petition that is currently at over 4,000 signatures and started plans for the walkout.

Title IX, a federal law that prohibits discrimination, sexual assault and interpersonal violence, among other factors, does not transfer from campus to campus. One of the alleged incidents occurred while both individuals were students at Harpool Middle School, so the accused is given what Jenkinson described as a “clean slate.”

“She was told ‘that’s in the past,’ you know, everyone gets a clean slate and that’s not how trauma works,” Jenkinson said. “That’s when she really started struggling. It was just the ultimate dismissal.”

On Oct. 14., the night before the planned walkout, principal Dr. Shaun Perry sent out an email urging students to remain in class and barring outside visitors, such as parents of survivors, from attending the protest. Violators would potentially face a Class C misdemeanor for criminal trespassing. The email ends with a discussion on Guyer’s reputation, which was described as one “built on the accomplishments of our students.”

“They’re still dismissing so much of this and [Dr. Perry’s] email about protecting Guyer’s reputation, they just don’t get it, or they’re choosing not to get it,” Jenkinson said.

Among hundreds of students chanting, “No means no,” there were many signs ranging on topics from the competency of Perry to comments such as, “Rape: the only crime where the victim becomes the accused,” and “I had to leave Guyer to be safe.” Among the students in attendance, there was Mangawe, who carried a sign that read, “Even my dog knows how to back off when I say no,” saying that it boggled her that consent is still an issue and that there are no excuses for rapists.

“You don’t see people protesting and walking out at these kinds of numbers for something insignificant that they don’t believe in,” Jenkinson said. “It just really says a lot about how tired people are of this and how much change is needed.”

Ajax Robinson, a sophomore student at Guyer and an attendee of the walkout, believes that in the future, students should report even a rumor about assault since many victims are too scared to go forward. Similarly, Mangawe believes that reports of harassment or assault should always be followed through with a thorough investigation.

“I want to say that I have fun [at Guyer High School] and that I feel safe, but that’s hardly ever the case,” Mangawe said.

Guyer is no stranger to controversies, as the school was in the news just over a year ago because of reports that the Guyer student section were yelling racial, homophobic and sexist comments at Lake Ridge High School students during a football game. Through videos recorded by attendees of this game, comments were heard such as, “Lynch the hoes,” “Kill yourselves,” and homophobic slurs.

“I would hear from all the way up to the stands people yelling slurs, and it just reminds me so much of how guys in the hallways can say the most terrible things,” Robinson said.

Robinson said that, as a transgender, nonbinary and bisexual student, they have been harassed over their identity and sexuality, especially when they were in a past relationship with another feminine-presenting student. They also recounted how students make inappropriate sexual advances on homosexual male students in an attempt to frame the homosexual student as predatory. Robinson said that the culture at the high school is very similar to the philosophy of “boys will be boys.”

In a statement provided by Denton ISD Chief Communications Officer Julie Zwahr, school officials state that “Guyer High School is in full cooperation with local law enforcement officials, who are currently conducting a thorough investigation.” The statement said the district and Guyer are still responsible for investigations regarding the district’s code of conduct, but all information related to disciplinary investigations are confidential due to the Family Educational Rights and Privacy Act.

As stated in the petition, the students are united by the message, “We are not victims of [the accused]. We are not check-off boxes. We are not a bucket list of his, we are survivors and it’s time for justice.”

Published in Community and News