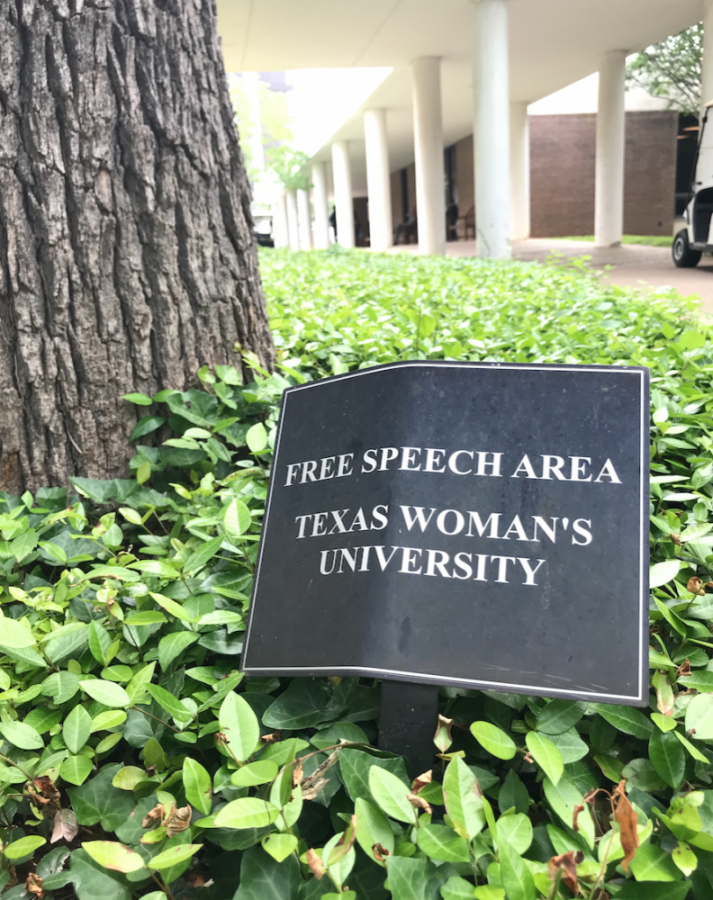 The flyers, which have been placed on the bulletin board outside the student union for the past several weeks, suggest that TWU’s free speech policy is too restrictive, requiring pre-approval to use free speech zones and distribute literature. The flyers urge the university to eliminate zones and pre approval requirements, allowing free expression on all areas of campus. According to university officials, however, the flyers are largely inaccurate.

“I don’t have any problem with these being up, it’s just some of the information is not accurate,” Kyle Voyles, executive director of the Center for Student Development and former director of the Office of Civility and Community Standards, said. “We have always suggested that people let us know if they’re going to be there just so that we can let the user know – say there was going to be a pro-life group and a pro-choice group on the same day, we would let them know that there could be conflict, but there’s no requirement.”

While anyone can use free speech areas without pre approval, the “Distribution of Information & Printed Materials” statute reads “A copy of all posters and announcements to be posted and publicized on bulletin boards and other University facilities must be furnished to the Center for Student Development,” seemingly in opposition to the “Free Speech Areas” policy.

“We do require that groups or individuals bring their information to us to be stamped,” Voyles said. “We look for anything obscene, things that are advertising alcoholic parties in town because so many of our students are underage […] and anything that may be racially divisive. I think in the last two years we’ve denied one thing going up on campus and that’s because it was advertising a party over at UNT that was encouraging underage drinking.”

While Voyles said the Center for Student Development enforces the distribution policy, it applies only to material to be distributed outside of free speech zones and the free speech bulletin board, located outside the Student Union. For those who have unknowingly violated that preapproval policy by posting on other bulletin boards, though, Voyles said they should not worry too much.

“We don’t go around and police them,” Voyles said.

The distribution policy also states, “Persons and organizations not officially connected with the University may come upon university property and may use the university facilities for effecting the posting of announcements […] only after obtaining authorization from the Center for Student Development,” but Voyles said that does not apply to the free speech board.

Voyles did admit that clarifying the language in both policies could help clear up the confusion.

“I could see that maybe that’s why people thought that, and that could be cleared up,” Voyles said in reference to the claims outlined in the flyers.

Voyles said his office has not received complaints about the free speech policy and that, to his knowledge, the university has never required authorization for the use of free speech zones.

“I’ve been at TWU for 21 years, and there’s never been a time, during that 20-year period, where you had to register to use free speech [areas],” Voyles said.

While the American Civil Liberties Union argues that the use of zones restricts free speech on college campuses, Voyles said that TWU does not aim to limit First Amendment rights – but it may be aiming to limit disruptions.

“We do have free speech zones in Dallas and Houston that are exterior,” Voyles said. “Maybe that’s the reason that we didn’t open it up because for there, if you allow it inside then you’ve allowed it in front of an academic classroom, and maybe they thought it would be disruptive to the academic environment.”

Those interested in learning more about the Free Speech Areas and Distribution of Information policies can access them on the TWU website under “University Regulations and Procedures.”