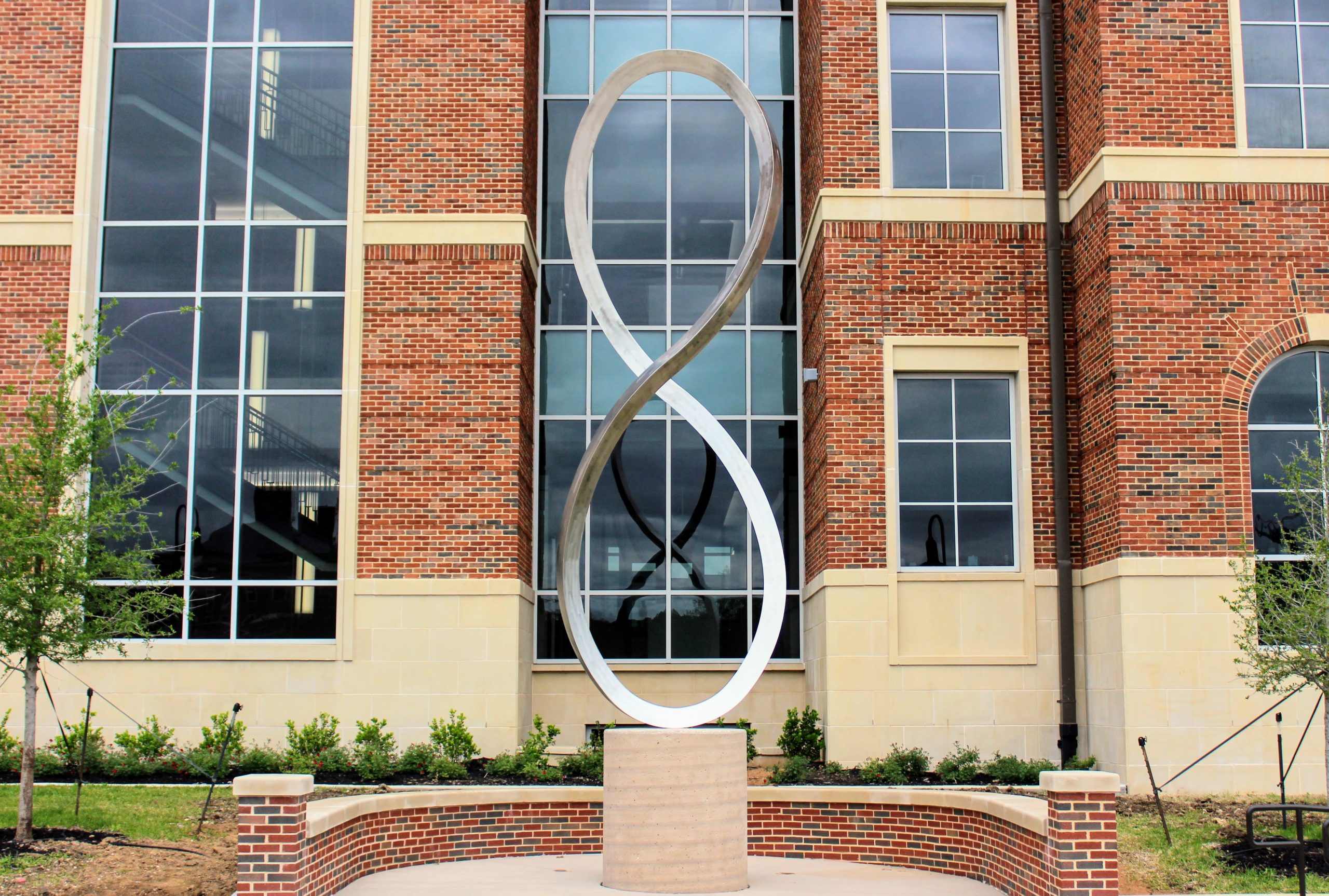 Betty R. Johnston donated over $1 million to the Texas Woman’s University Alumni Association after she passed in 2014. Earlier this month, that gift was used to build a sculpture in memory of her.

The sculpture is titled “Infinite,” and was made by artist Roger Berry. It is a sculpture of the infinity symbol, and it is made out of stainless steel, is approximately 20 feet high and sits on a seven-foot pedestal, and weighs about 1,200 pounds. It is located outside of the Science Research Commons facing Old Main Drive, and it was revealed on April 13.

Johnston graduated from TWU (known as Texas State College for Women at the time) in 1947 with a bachelor’s degree in chemistry. She then joined the U.S Army and later became a first lieutenant. She served at the Dugway Proving Ground in Utah doing biological warfare assessment.

Johnston never married or had a family, but she was able to travel to many different countries. She enjoyed playing golf at courses around the world. She eventually returned to Lubbock, Texas, where she most recently lived before her passing.

She passed in 2014 at the age of 88. The TWU Alumni Association received the gift of $1.6 million in 2016 that was unrestricted, which was the largest estate gift the organization has received. The idea for the sculpture in her honor started to come to life in January of 2020.

“We didn’t do anything with [the money] for quite a while,” TWU Alumni Association President Barbara Rogers said. “When I became president in 2019, I just thought ‘I want to do something about this.’”

Berry is located in Clarksburg, California. He was able to visit the campus in February of 2020, but was unable to continue visiting due to the COVID-19 pandemic.

“He was supposed to come a couple of other times, but he didn’t because he couldn’t,” Rogers said. “Nevertheless, he still delivered, and we just did everything long-distanced.”

Berry built the sculpture in approximately a month in his barn. He has built sculptures of DNA molecules for other universities that were specifically designed to be outside.

Berry drove the sculpture from California to TWU the weekend of April 10. The morning of April 13 the sculpture was placed on the pedestal, and there was a dedication held later that day. The TWU Alumni Association gave the sculpture to the university to handle liability issues and maintenance for the future.

“[Berry] sent us three designs, two were of the DNA molecule, and one was a sculpture that he called ‘infinite,’” Rogers said. “It was the symbol for infinity, and he was inspired to do that because someone asked him when he got home ‘tell me about TWU’ and he said ‘a student at TWU has infinite possibilities.’”