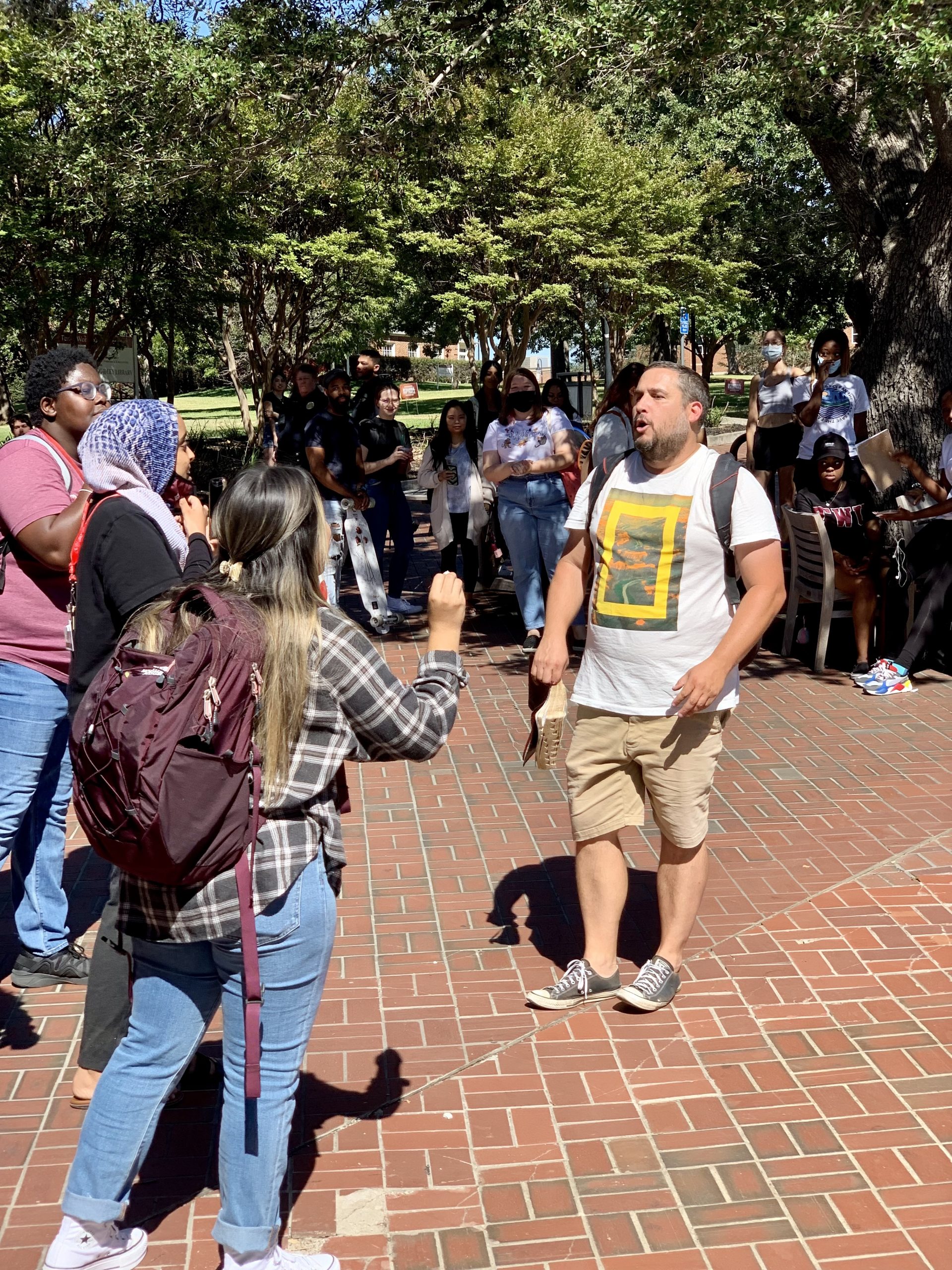 The preacher, Ken (who refused to share his last name), walked on campus around 12 p.m. and stayed until 4 p.m. He brought two handwritten signs saying, “Abortion is murder” and “Ask me why you deserve hell.” TWU students gathered around him rebelling against his words, creating a mass rally.

Students were outraged as he began to talk about homosexuality, transgender people, abortion, COVID-19, rape and religious views. Ken said that COVID-19 is a hoax and vaccines are not real along with other claims over various topics.

Students were fighting back with words to Ken and speaking up for themselves. At one point, a speaker was brought out and music was blaring through the crowd.

“Everyone has first amendment rights. However, he is regurgitating hatred and spreading dangerous information,” TWU student Hibaaq said. “This man said that if a child has been raped, then that child has to carry till birth because it’s the will of God. He is spreading hatred on this campus, and he attacked my religious views.”

TWU student Brenita Davis Evans danced behind Ken as he preached to the group of students.

“I wanted him to shut the hell up,” Evans said. “People are suffering from COVID, and he’s just making fun of it, and I can’t condone that. What he said about abortion is wrong, and it’s horrible. He’s an idiot, and people like him need help and need to seek Jesus.”

According to Ken, he came to speak because he is a Christian and has a ministry that reaches out to college students for the last 13 years. He said he loves college students and goes to campuses to preach the gospel.

“Your theology is wrong,” Ken said. “I know college students are being lied to, this generation especially doesn’t believe in God. I’ve come to spread the gospel and tell you that there is a God.”

Christians are sent to preach the word of God, and that’s why it’s a spiritual battle and there’s demonic opposition, Ken said.

Multiple police were called to the scene to watch over and protect the students along with Ken. TWU Police Department’s Chief Harrison said he wanted to make sure everyone was safe and that education was still happening.

“When the situation becomes unsafe or someone assaults someone, at that point we would step in,” said Harrison.

However, not all students were arguing back. TWU student Mary Ray does not believe that Ken is right, but she said the students are pushing Ken to continue.

“Everyone should just go home,” said Ray. “I think they are messing with someone who is mentally ill and probably needs help rather than being yelled at. I believe that it’s performative activism, they are just arguing with a random guy.”

The rally calmed down around 4 p.m. when Ken walked away, and students followed shortly after.