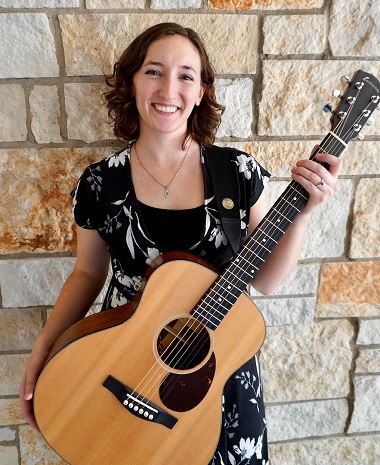 Former Texas Woman’s University student Kathleen Montes first started her music career in music education, but when she saw how music affected her father before he passed away from brain cancer, she said she realized becoming a music therapist was the right path for her.

Montes graduated from TWU in December, and she is now beginning her music therapy career, which was first inspired by her father. Her father was unable to speak, but he was still able to make sounds and imitate music.

“I was present for when we found out about the diagnosis, I was present for all of the decline, and I was present for his final moments when he died, and that was really hard on me,” Montes said. “But there was something really special about his last days, because he had lost the ability to communicate with words, but he could still hum and kind of mimic sounds that he heard.”

Her father was a musician, so music was always in him, Montes said.

“It was really neat to see how music was still a meaningful part of his life, even at the very end when there was really nothing else he could do for himself,” Montes said. “So that kind of stuck with me for a long time.”

Montes first got her degree in music education and taught at an elementary school in a local school district for a few years. The district started to take a different approach and to standardize music, which Montes said she felt made it lose some of its art and beauty. Once she learned more about music therapy, she was accepted to TWU during her last year of teaching to pursue a hospice music therapy career.

“The moment that I decided I wanted to do music therapy, I knew that it needed to be in hospice, where quality of life is more important than things like competition and standardization,” Montes said. “There’s so much beauty to music.”

After attending TWU, she began searching for an internship in hospice. She was not having any luck until her and her supervisor created an internship at Faith Presbyterian Hospice in Dallas, which she was able to begin in February 2020.

“I got to grow so much through my time at Faith Presbyterian Hospice,” Montes said. “I did not only do my internship there, but also my practicum four there.”

Once the pandemic hit in March, it started to affect the experience at her internship, because she could not come face to face with her patients.

“The pandemic really affected my internship quite a bit because most of my caseloads were patients living in facilities like nursing homes, assisted living, independent living, [and] group homes and that became really challenging because I wasn’t able to say goodbye to them,” Montes said. “I tried to do some distant visits where I would be outside of the window sitting in the mulch in the garden and singing to them through a mask and through a little window screen while they were still in the room. For a while that was okay, but it wasn’t ideal because they didn’t really understand why I couldn’t come inside.”

Along with the pandemic, Montes started to face medical issues when she had to go to the emergency room in the second week of March. She said that she thought she might have had a stroke, because half of her body was numb. After her first MRI a legion was discovered, her neurologist said it was either low-grade glioma with a possibility that she only had ten to 15 years left to live, or multiple sclerosis. She ended up being diagnosed with multiple sclerosis, but the period between diagnostic tests was horrible, because she didn’t know if the low-grade glioma applied to her or not, Montes said.

“I had to start facing my own mortality during my internship, dealing with people who are also facing their own mortality,” Montes said. “So that was really emotionally draining, because what if I end up being one of them now.”

Montes’s internship was affected by medical problems and emotional struggles, but once she completed the program, they offered her a full-time job.

“The staff there started to see the actual benefits of music therapy and having a music therapist there more often,” Montes said. “I had a really nice positive effect on families, and they were asking for more visits, and I think that kind of sparked something in the manager of the unit.”

She is currently working at Faith Presbyterian Hospice as a full-time hospice music therapist.

“One of the really cool things about being a hospice music therapist is that it’s not as sad and depressing as people might think,” Montes said. “Because when most people think hospice, they think death, and really hospice is more about celebrating life events and about really living until the end of your life as opposed to dreading the death that is imminent.”

Montes said she is loving her music therapy career in hospice, and that she is inspired by the relationships she can build through music.

“It’s super cool when you get that relationship going in all directions, between the music therapist, the patient, the music and their families,” Montes said. “That’s when the real magic happens, and that’s what makes me love my job. It’s just magic. There’s some wizardry involved, and I don’t know what it is but it’s great.”