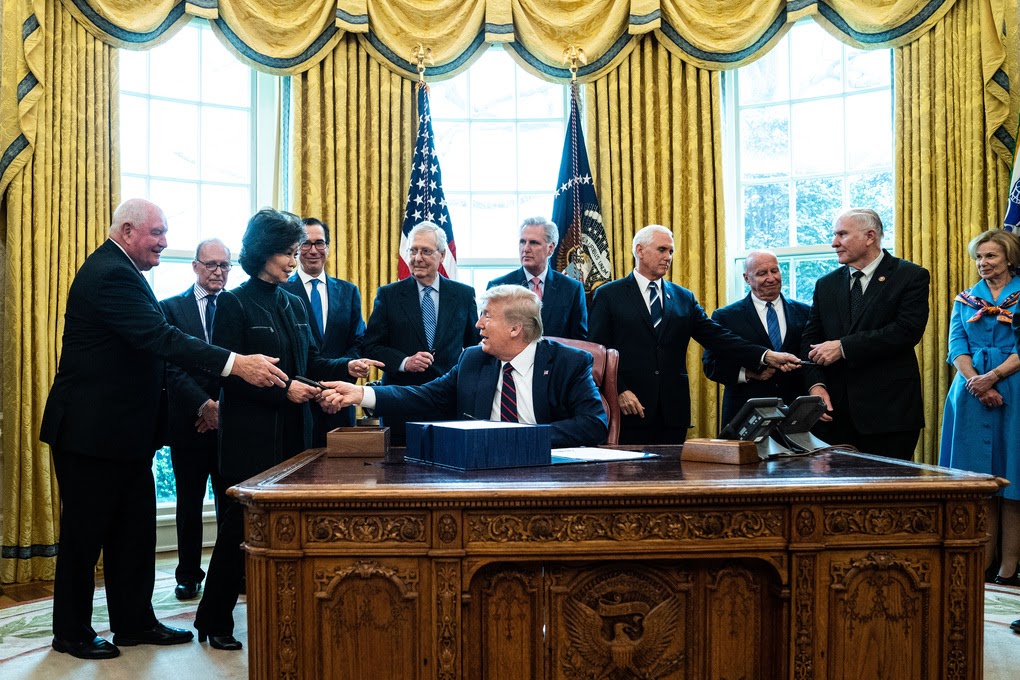 President Donald Trump signed a $2 trillion economic stimulus package  March 27 in the hopes of saving the country from further economic decline due the effects of the spread of the COVID-19 virus. This will be the largest sum of money ever put into an emergency relief bill by the U.S. government, greatly surpassing the funds for the 2009 stimulus package, which amounted to$787 billion.

Due to the heightened employment rates and sudden drop in the economy, Congress plans to support Americans during the epidemic by sending a check of $1,200 to individuals and $2,400 to married couples with an additional $500 each for every child in the household. Only a few requirements need to be met to be eligible for support from the stimulus package.

Those who have a social security number and make up to $75,000 a year in adjusted gross income qualify for the emergency funds. However, funds will not be distributed to single filers who make more than $99,000, or joint filers who make more than $198,000, because those with such earnings may be deemed by the government as needing less help than those with lower incomes.

The bill will also exclude adults with disabilities and elders who are claimed as dependents.

So, what does this mean for students? Not much.

High school and college students between  17 and 24 who are claimed as a dependent on another person’s tax return will not be eligible for direct payments that may come from the package. However, those 16 and under will qualify for a credit of $500 that will go to their tax filer.

There also does not seem to be any loopholes in this situation as adult dependents don’t qualify to receive a separate check.

That rules out  a large part of the country that may need extra financial support due to the costs of living as a young adult. The exact reason for the elimination of students from receiving emergency funds is not quite known. This has resulted in many students around the country feeling disappointed.

Students like Michigan State University’s newspaper podcast coordinator Katie O’Brian Kelley have written personal opinion pieces about the matter. O’Brian Kelley said that she felt shocked, yet not surprised with the government decision. She also said she feels heartbroken for other students who are financially struggling.

“College students all across the U.S. have lost their jobs and still have to magically find a way to pay their rent without any help from the government,” O’Brian Kelley writes in her column.  “It’s unfair that they were not considered at all in this stimulus package.”

Decisions made about who can and cannot receive emergency funds have been solidified and as of right now, there has not been any information on other bills or alternatives for the people who will not be obtaining any money.

For those eligible, the funds will be given either through direct deposit or a check in the mail from the Internal Revenue Service.

Featured image: President in the process of signing stimulus bill Courtesy of The New York Times.